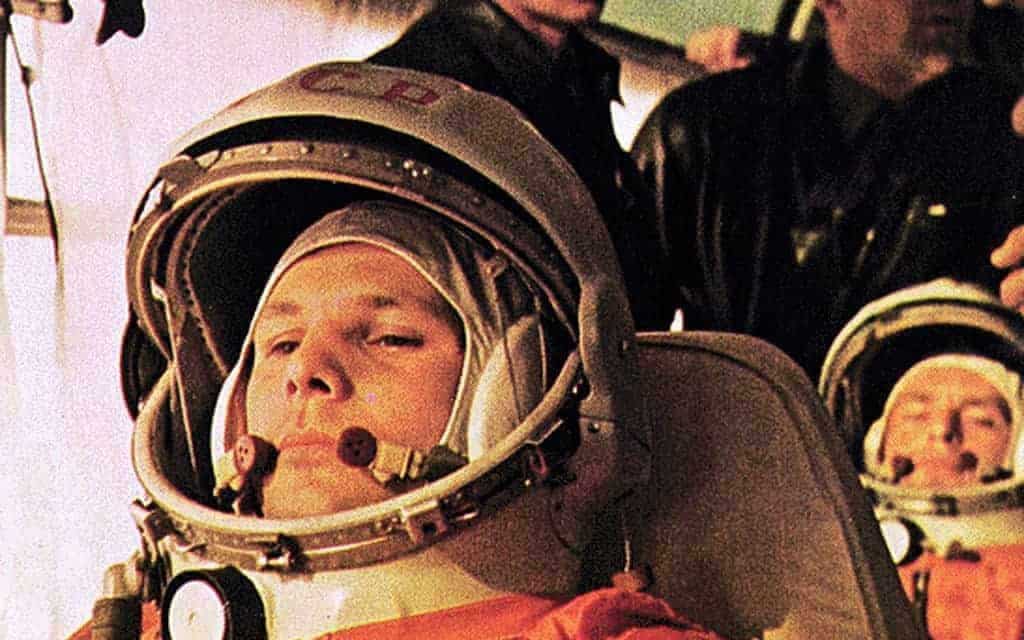 At the beginning of the year 1961, no man had ever left the Earth. People had dreamed of it. They’d gazed wistfully at the stars. But no one had ever been there. Yuri Gagarin was about to change that. On April 12, 1961, Gagarin sat on a launchpad in Kazakhstan inside the capsule of the Vostok 1. The capsule had manual controls, but they were locked. No one had any idea how weightlessness would affect a cosmonaut. They couldn’t risk Gagarin being knocked out and left unable to operate the craft. Instead, the Vostok 1 would be controlled from the ground. All Gagarin could do now was strap himself in and wait as the rockets fired.

The Vostok screamed through the atmosphere, breaking through into low orbit. For 108 minutes, Gagarin took in a view that no human being had ever seen before. The Earth curved gently below him as he circled the planet. He could see the lights of cities shining in the night and, just minutes later, the deep blue of the day-lit oceans. Finally, as he floated over Africa, it was time to come back down. The Vostok’s rockets fired, guiding the capsule back out of orbit. Gagarin was the first man in space, but could he also be the first to come back alive?

The Soviets had carefully designed the Vostok capsule to see Gagarin into space. But they had no plan to get it back with Gagarin still inside. The reentry capsule had no parachutes or thrusters to slow it down for a safe landing. Instead, Gagarin had to ride the capsule through the atmosphere and eject seven miles up. From there, he floated back to Earth with a parachute. According to international standards, the mission wouldn’t count as a spaceflight unless Gagarin actually returned inside the ship. But the Soviets had a simple solution to that: they just told everyone he had.

News of Gagarin’s flight spread around the world. In the US, the public reaction was mixed. Some wondered at the breathtaking achievement and the potential it had for the future. Others saw the Soviet victory as a defeat for the US. At a time when many worried that communism was set to take over the Earth, the idea that the USSR might come to dominate space as well was terrifying. But in the Moscow, the public was ecstatic. Gagarin was given a parade through the city as hundreds of thousands stood along the streets and on the roofs cheering the latest Soviet hero.

But all Gagarin really wanted- all he’d ever wanted- was to fly. Gagarin was born in a small Russian village, and from a young age, he’d been interested in flight. As a teenager, he learned to fly by volunteering as an air cadet. By 1957, he was a fighter pilot in the Soviet Air Force. He was one of the first to volunteer to be a cosmonaut. To become one, he’d endured a period of training so intense that out of 20 prospective cosmonauts, only Gagarin and one other volunteer made it through. As a cosmonaut, he’d flown higher than anyone had before. Unfortunately for Gagarin, he would never get the chance to do it again.

Gagarin was an instant celebrity. At heart, he was a humble farm boy, and becoming a Hero of the Soviet Union was a radical change. Now everyone knew who he was, and many wanted his help. Letters addressed to Gagarin came flooding in. People across the Soviet Union assumed that he must have some sway with the government. They wanted him to help them deliver the things they had been promised by the communist government like food or decent housing. The letters were eye-opening for Gagarin. He now saw the failures to provide for its people that the Soviet government was hiding through its propaganda.

His new position was hard for Gagarin for other reasons as well. He was now a cosmonaut in name only. The Soviets wanted Gagarin to be a symbol of their success. The space program was still dangerous, and they didn’t want to risk their star cosmonaut on actual space missions. Instead, he was paraded around the world as proof of the superiority of the Soviet system. The fame took a toll on Gagarin. He didn’t want to be a celebrity, he wanted to be a pilot. Gagarin soon grew depressed and began drinking heavily. Then, in 1968, he discovered another reason to hate his government.

Gagarin was slated to be a backup pilot for the Soyuz 1 mission, set to launch in April. His close friend, Vladimir Komarov, was scheduled to be lead pilot. But there were already signs that the Soyuz had serious technical problems, including a number of failed test flights that had seen rockets explode on the launch pad. The mission itself was also very complex and required the cosmonaut to rendezvous with a second craft in orbit, which would have been challenging in the best circumstances. In a flawed craft it could be deadly.

In spite of the potential dangers of the mission, the launch went ahead as scheduled. For Komarov, it was the second trip to space, and it would also be the last. Immediately, the problems with the Soyuz were clear. A solar panel failed to open and the guidance systems failed. The mission was canceled. But on the way back to Earth, Komarov’s parachute failed to open. His craft hit the ground at full speed and caught fire. Komarov died instantly.

The death of his friend hit Gagarin hard. There’s a lot we don’t know about the Soyuz crash. The Soviet Union was a place where the truth was usually hard to come by. And most of the details that have emerged from people claiming to know the truth about the crash since the Union’s fall are disputed. But if you’re the type who is inclined to believe in Soviet conspiracy theories, Komarov’s death is when things get interesting between Gagarin and the KGB. According to some, it marks the point when the Soviet Government began to view their hero as a threat, and it may have led to his death.

One case for why the KGB might have wanted to kill Gagarin comes from an alledged account by a KGB agent, Venyamin Russayev. It’s recounted in the 2011 book Starman, which covers what the authors claim is a behind-the-scenes look at the Soyuz crash. And the first thing that needs to be said is that a lot of experts dispute many of the details of the book. As far as Gagarin’s story goes, the conclusion you draw depends on if you consider Russayev a reliable source, which the authors of the book claim is the case.

According to an account by Russayev cited in the book, he met Gagarin in an apartment shortly after the crash. Gagarin then led Russayev into a stairwell, since he believed his apartment had been bugged by the government. There, he told Russayev that he was planning to confront the head of the Soviet Union, Leonid Brezhnev. “I’ll get through to him somehow, and if I ever find out he knew about the situation and still let everything happen, then I know exactly what I’m going to do,” he reportedly said.

Did Gagarin really threaten the head of the Soviet Union? Did the KGB get wind of it? There’s no real evidence that either happened. But if it did, then it does give the KGB a possible motive to kill Gagarin. For the Soviet leaders, a dead hero might have been better than one that could eventually have been openly critical of the government. Again, it’s important to remember that no one is really certain who Russayev is or if he actually even exists. But if you believe in the idea that the KGB wanted to kill Gagarin, then the details of his death certainly look suspicious.

In March 1968, Gagarin and another pilot were at the controls of a jet for a routine training mission. At around 10 AM, Gagarin reported in by radio that he had completed the training mission and was heading back to base. He never made it back. After Gagarin failed to return and couldn’t be reached by radio, a search began. The wreckage of Gagarin’s plane was discovered in a forest nearby that afternoon. Neither Gagarin nor his co-pilot survived the crash. Gagarin was given a state funeral soon after as rumors began circulating about just what had happened. According to some, Gagarin had been drunk at the controls when he crashed. According to another report, air control had given Gagarin bad weather data that contributed to the crash.

But in 2013, a reported witness at the scene claimed that Gagarin’s plane had been buzzed by a larger aircraft during his flight. As a result, Gagarin lost control and crashed. The most likely explanation is that the crash was an accident. But that hasn’t stopped conspiracy theorists from wondering if the plane had been sent by the Soviet Government to kill Gagarin. Whatever the truth, Gagarin’s death was a tragedy. Gagarin’s smiling face had done much to humanize the Soviet side of the Space race. As Sergei Korolev, one of the men who helped build the Soviet space program said, it was a smile “that lit up the Cold War.”