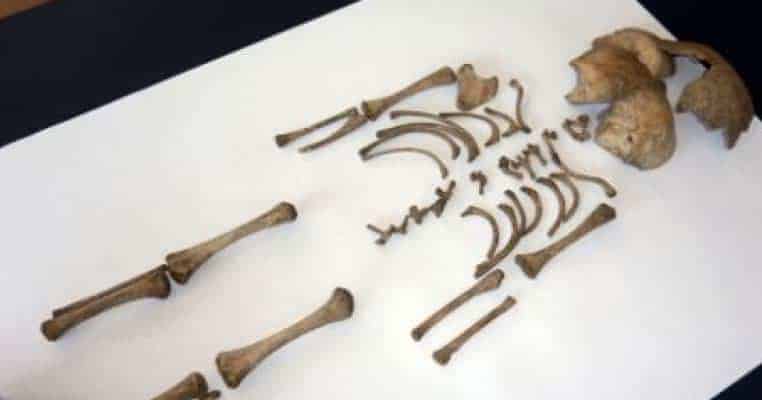 A field in Hambleden, Buckinghamshire, located in southeast England hides something considered extremely heinous to us today but completely normal to the ancient Romans who settled the area 2,000 years ago. At Yewden Villa, an archaeologist uncovered the bones of 97 infants in a mass grave, the most substantial discovery of its kind found at a Romano-British site. Originally thought to be a site of ritual infanticide, recent studies of the site have raised more questions than answers. An archaeologist who led the most recent investigation of the site thinks there was a brothel there, which explains the presence of the infant’s bones; others aren’t so sure.

Many factors indicate that the Roman villa was a highly sophisticated agricultural settlement. There is one main house with evidence of luxurious living, such as heated floors and a tiled roof. More structures at the site are less sophisticated, suggesting that they may have been workhouses or housing for servants, workers, or slaves. Archaeologists have uncovered fourteen ovens and over twenty-six garbage pits at Hambleden, a large quantity that suggests that the town was highly productive. The ovens show signs of use in drying corn, processing barley, and melting bronze, indicating that the community produced a variety of items for use and trade.

The archaeologist, Alfred Heneage Cocks, led the original excavation and collected his thoughts on the findings in 1921, including his opinion that the community practiced infanticide, but he did not focus on it. The evidence from the initial excavation, conducted before modern archaeology techniques, sat housed in the archives of Buckinghamshire County Museum until archaeologist Dr. Jill Eyers discovered them in 2008. Dr. Eyers led a new investigation, and she concluded that the site was an ancient Roman brothel where prostitutes were forced to abandon their babies, under the assumption that they had very few options on contraception and infanticide was their only option.

As shocking as it is to us today, infanticide was an open and systematic method of maintaining the population and contributing to the greater good of the typical Roman family. According to Roman law, parents deserted newborns who were sick or had a visible congenital disability. Babies born to families who couldn’t care for them were also abandoned to the elements.

Ancient Roman burial practices were much different than they are today. Unlike modern-day thinking, a person was not considered a person when they were born, due to a high infant mortality rate. Infants often went unnamed until they survived the first week of life, and they weren’t considered full Roman citizens until they were almost a year old. Romans cremated their dead until the end of the second century when burials became more common. Babies who died before they were about six weeks old did not receive funerals, and they were buried in communal sites in the town or city.

There is some support for the infanticide theory at Hambleden. Almost all of the bones recovered were from the same area, and all of the babies found in the graveyard died around the same age. Measurements of the leg bones estimate that the infants died around 40 weeks, right after they were born. If the grave was just a cemetery, there would be examples of bones that were both older and younger than the 40-week range, examples of pre-natal and post-natal death.

The discovery at Hambleden also has striking similarities to another mass infant gravesite found in what was the former Roman empire. In 1988, at the site of a brothel in Ashkelon, Israel, archaeologists discovered the remains of one hundred infants in what was a sewer that ran beneath the structure. They are all born relatively soon before they died, and all of them are estimated to be at about 40 weeks, making it a suspected site of infanticide because of the location and the age of the bones.

Despite some signs that seem to confirm it, there is some doubt that parents abandoned all of the infants found at the site. Some of the babies buried in the grave could have been stillborn, or they could have died soon after birth from natural causes. All we know is that they were all buried together, which aligns with standard ancient Roman burial practices. There is no other support to completely confirm infanticide other than the bones being relatively the same age and buried in the same location, so the fate of the infants in the mass grave currently remains a mystery.

In the second investigation into Yewden Villa, Dr. Jill Eyers suggested that there was a brothel on the grounds of the villa, and prostitutes used the mass grave to abandon their babies, without other options for birth control. This theory has created much debate and has captured media attention on the discovery at Hambleden. While some support Dr. Eyers’ opinion, many other archaeologists and researchers question it based on the lack of other evidence indicating the presence of a brothel.

One of the main assumptions behind the theory is that the women who were forced to abandon their children felt like they had no other options. Not only is that assuming that the bones were victims of infanticide, which hasn’t been completely confirmed yet, but there is much documentation that shows that the Romans routinely practiced birth control. Women across the whole Empire, including Roman Britain, used herbs, plants, and spermicides to either prevent or terminate a pregnancy. Using these methods, they were able to control the size of their families, maintaining an average of two children per family, until the fall of the Western Roman Empire. It seems unlikely that prostitutes, whose occupation could lead to unwanted pregnancy, would be unfamiliar with contemporary birth control methods and would have to resort to neglecting their babies.

What other evidence is there that there was a brothel on the grounds of Yewden Villa? Archaeologists and historians use literary references and government records to identify the potential sites that may have housed a Roman brothel. The well-preserved brothels of Pompeii are currently the standard of comparison for identification. None of the buildings at Hambleden have been identified as a brothel, using these methods. The characteristics of the structures are more suited to an agricultural settlement, and the town is too far away from other larger Roman communities to have attracted a legitimate business.

The grave itself certainly doesn’t confirm the theory. Even if some of the infants were abandoned in the burial ground, that does not mean that their mothers were prostitutes who were forced to such measures. The settlement could have had other women, such as servants or slaves, who may not have had the money or the means to use birth control, which could explain why they relied on infanticide as a form of family planning.

Before archaeologists and historians can understand the significance of the Hambleden site, they must determine if the grave was a site of infanticide or not. New research may definitively answer this question through a non-invasive method of studying ancient bones through x-ray microtomography. Very soon after birth, our bodies develop bacteria in our stomachs that will disintegrate the interior of our bones after death; a stillborn child’s bones would not show this kind of deterioration. Using a scanner to see inside bones without damaging them, scientists can now determine if infants were alive when they were born based on the density of the bone.

Scientists have not tested the bones found at Yewden villa with this new research method, but it may be the only way to determine if the babies were stillborn, killed at birth, or a combination of the two. Before this testing can take place, it is more accurate to identify the grave as a burial ground for infants who died from either natural causes or abandonment, as opposed to presuming that all of the babies were victims of infanticide.

Using the infanticide theory as the only support for the presence of a brothel is a hasty judgment, especially since none of the structures at Yewden Villa show any of the standard markers for being a brothel. Historians and archaeologists have a responsibility to use all of the facts at their disposal to investigate their studies, and there isn’t enough evidence to support either theory that the Roman villa regularly abandoned their babies or that the burial ground is evidence for a brothel.