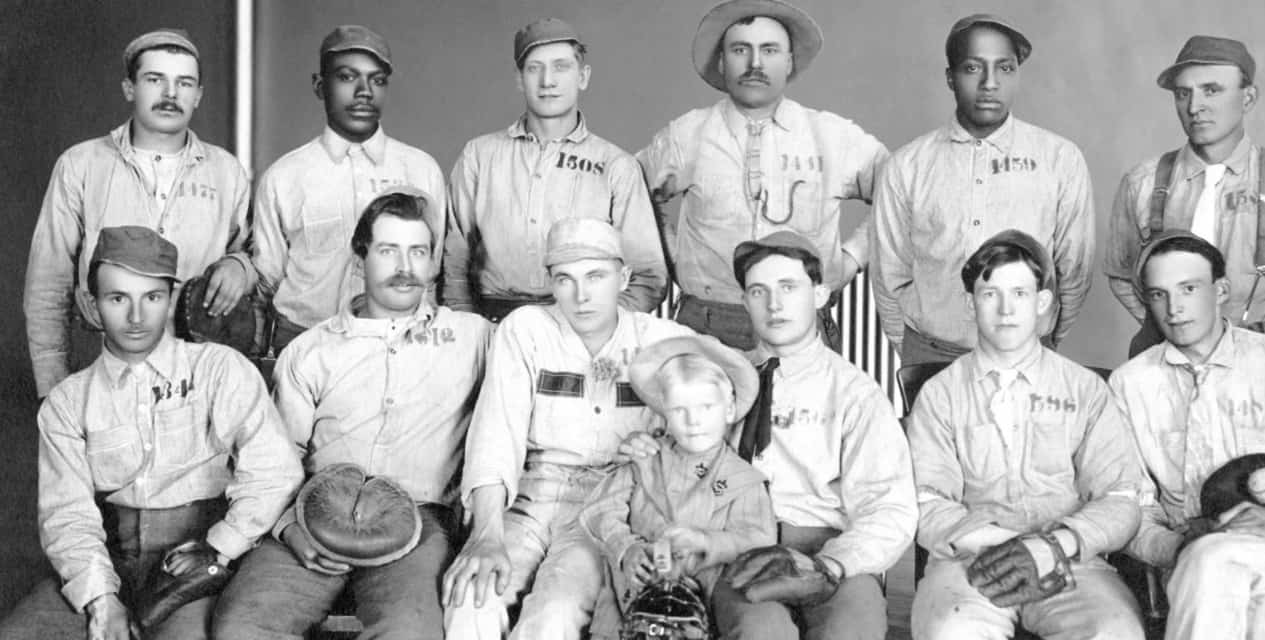 The Wyoming State Penitentiary All Stars looked like your average baseball team. Healthy young men swung their bats and ran to their bases just like any other. For a prison team, you would think that this was some kind of reward for good behavior. But in fact, it was quite the opposite. These men were all guilty of heinous crimes; most of them rapists and murderers. And every single one of them was on death row. This is a story of how a group of criminals were lured by the promise that if they only played well enough, they could commute their sentences, meaning that they were very literally playing for their lives.

The Wild West Was Forced To Get With Modern Times

Wyoming was still very much part of the classic wild west culture. Even well into the late 1800s, most people believed in vigilante justice. Sheriffs were apprehending criminals, instead of a local police force. Professional bounty hunters were chasing down convicts for a reward. Local county jails were too small to house men for a lifetime, so criminals were still being hung in the town square. Men frequented saloons and gambled on a nearly daily basis.

Baseball is an iconic American sport. It was such an important past time that it was the number one thing that people like to do after work, aside from going to the bar. Men were able to enjoy a wholesome, family-friendly activity with their sons on the baseball field. Because of its popularity, there was a huge demand for more and more games for people to go see. However, there was of course only so many professional teams. Nearly every local business started amateur teams so that the men could compete with one another.

The Wyoming State Penitentiary was founded in 1901. It did not have electricity or running water, so the inside was cold, dark, and miserable. And of course, anything that is brand new is open to exploitation. The prison was run by a man named Otto Gramm, a millionaire businessman who wanted to become warden. He decided to create a broom factory inside of the prison and used the criminals as his free labor. In the first 10 years that the prison was open, he earned a profit of $250,000. Back in the early 1900s, this was more like making him over $6 million.

In order to make the highest possible profit, Otto Gramm had extremely strict rules for the living conditions of the prisoners. He measured how much food each person got, even down to the number of individual beans that they could have on their plates. The living conditions were abysmal and by 1911, the government began to realize what was going on. They made it illegal for any warden to personally profit off of his prisoners. (However, now the government profits off of products made by prisoners like license plates, but that’s a story for another time.) Otto Gramm stepped down from his position as warden, but he left a far richer man than when he started. He was replaced by a man named Felix Alston, who had served as the sheriff of Big Horn County, WY.

Sheriff Felix Alston was much more compassionate to the prisoners than his predecessor. He allowed them to get outside and exercise on the prison grounds. Many of these men had not been out in daylight for the ten years – since the prison had first opened. This is how the baseball team started. It was the most entertaining activity that they could all do together outside. It was during these recess sessions that Alston began to notice that some of these men had a true talent for baseball that was on-level with professional players.

Sheriff Alston was friends with the governor of Wyoming, Joseph Carey. He asked for permission to let the men form their own baseball team. Governor Carey was a gambler, and he could see the golden opportunity to make a profit off of the convicts. So he agreed to let The Wyoming State Penitentiary All Stars form a proper team. The team was given brand new uniforms, and they were treated like true athletes. The Wyoming Supply Company Juniors was a local company team who agreed to play against the convicts. The WSP All-Stars pummeled them with a score of 11 to 1.

Joseph Seng was the best player on the team. He was on death row for killing his girlfriend’s husband in hopes that they could run away together. Even though he was a convicted murderer, people almost sympathized with the fact that he killed his lover’s husband. It was dramatic and sort of romantic (in a crazy, violent sort of way). Knowing his back story made people more invested in the games and journalists began writing about The All Stars in the newspapers across the United States. Joseph Seng was hitting home runs in nearly every game. Most people thought that it was a shame that such an athletic man with so much potential was on death row. People started writing letters to the governor of Wyoming asking for him to lessen Seng’s sentence. Rumors spread that if he could win enough games, he might have his sentence reduced from the death penalty to life in prison.

George Saban was a murderer who became the captain of the baseball team. Cattle herders and sheep farmers in Wyoming were in the middle of a turf war, because they were encroaching on one another’s land and destroying their businesses. There was still a lot of respect for the old west-style justice of shooting these people that were encroaching on his land. Because of that, a lot of people actually sympathized with him, including Sheriff Alston. He just so happen to be the one who originally arrested Saban. He completely sympathized with his motives for murder, but had to arrest him all the same.

Alston allowed Saban to come and go from the prison as he pleased in civilian clothes during the day. He was accompanied by an armed police officer at all times. As long as he came back to spend his nights in the prison, he basically got to live the life of a free man. While he was at the local bars, Saban would tell the men about how much they were training behind bars. This fascinated the local men and encouraged them to bet on the All-Star team. Of course, the warden and Governor Carey were both able to profit off this gambling, and it was all part of their bigger strategy.

It All Came Crashing Down

The baseball players began to receive special treatment. The baseball players enjoyed receiving more food at meal times. The straw that broke the camel’s back was the rumor that Joseph Seng may escape the death penalty. This did not sit well with the rest of the prisoners. Sheriff Alston kept making up excuses for the delay, blaming it on bureaucracy. On the day that Seng should have died, one of the other fellow inmates tried to kill him. A heavy box filled with sand came tumbling over the railing, right above his head. Luckily for Seng, the box missed him by just a few inches. After this, Sheriff Alston had to increase the security in the prison.

If any of the players made a huge mistake during a game, the team captain George Saban would scream at them in the dugout. He told the players that if they did badly in these games that they would have time added to their sentence. And he perpetuated the rumor that Joseph Seng just may escape the death penalty. This was not true, of course, but it was enough motivation to keep the players practicing and doing the best they possibly could.

In a town that was so full of drama and gossip, it was really no surprise that the word eventually spread about what was really going on in the Wyoming State Penitentiary. The citizens of Wyoming began to spread rumors that the governor was involved in this conspiracy. He decided to create a new anti-gambling campaign in order to convince people that he really wasn’t part of this. Sheriff Alston decided to cancel his baseball team and used the funding to create an education program instead.

Sheriff Alston was applauded by the local community. He was creating an educational program that would help rehabilitate these men who were typically high school dropouts and illiterate. Unfortunately for Joseph Seng, the governor never actually agreed to commute his sentence. The men in charge were able to pocket huge profits playing on the men’s hopes and dreams. Joseph Seng got to live a year longer than he should have, so the journey wasn’t all for nothing. Newspaper reporters show up to witness his execution. The reporters wrote that he walked bravely, with pride, and without fear. He knew that this truth may be the last year of his life and he lived it to the fullest, and he accepted his fate, closing the chapter on the prison team forever.