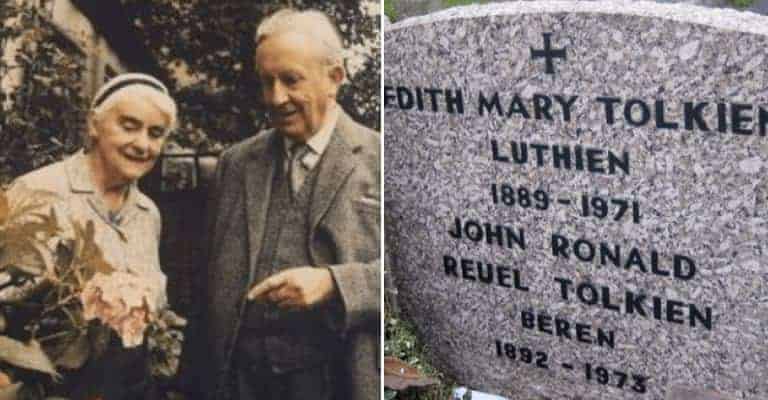 In the Catholic section of Oxfordshire’s Wolvercote graveyard is the last resting place of Oxford Professor of Anglo Saxon and creator of the Tales of Middle Earth, J.R.R. Tolkien. Inspired by the First World War, the changes of industrialization and its effects on the English countryside and the myths and legends of Faerie and the Anglo Saxons, Tolkien’s most famous Middle Earth sagas are The Hobbit and The Lord of the Rings. However, the inspiration for the very first of his tales, Luthien and Beren, lies buried within the grave with him: his wife, Edith Bratt.

“I never called Edith Luthien,” Tolkien wrote to his son Christopher in 1972, a year after Edith’s death, “but she was the source of the story that in time became the chief part of the Silmarillion.” Tolkien began the tale in 1917, inspired to create Luthien after seeing Edith dancing and singing in a hemlock grove. However, Luthien and Beren’s love story finds other, perhaps unwitting echoes, in Tolkien’s and Edith’s relationship – which saw the couple undergo their trials and tests before they too could have their own happily ever after.

Tolkien’s tale of Beren and Luthien may have begun in 1917. However, the roots of his own love story go back as far as 1908 when Tolkien was a sixteen-year-old schoolboy. Edith Bratt was three years older than Tolkien. She had just finished her musical studies at boarding school and was living in a boarding house in Edgbaston in Birmingham while she decided what to do next. Tolkien and his brother who were both studying in Birmingham also became boarders, and Tolkien and Edith, in particular, became close friends. Soon, friendship became love.

However, as in the case of Beren and Luthien, there was opposition to their match. For Beren and Luthien that opposition came in the form of Luthien’s father, Thingol who was unhappy with his daughter falling in love with a human. For Edith and Tolkien, it came in the shape of Father Francis Morgan, Tolkien’s guardian since the death of his mother. Father Morgan opposed the relationship based on the age gap between the young couple- and on religious grounds. For Edith was a protestant and Tolkien Catholic.

In 1909, Father Francis ordered Tolkien not to see or write to Edith again until he was 21. Like Thingol, who set Beren the impossible task of retrieving one of the sacred Silmarils stolen by the dark lord Morgoth so that he could win Luthien, Father Morgan was hoping that by creating distance between the couple, he could permanently part them. Tolkien, somewhat un-heroically complied with his guardian.”[Morgan]Threatening to cut short my university career if I did not stop, ” Tolkien noted in his diary. “Means I cannot see E. Nor write at all. God help me. Saw E at midday but would be with her. I owe all to Fr Francis and so must obey, “

True to his word, Tolkien did not write to Edith again until the evening of his 21st birthday when he declared his love for her and asked her to marry him. Edith, however, had moved on. She was living with friends of her family, the Jessop in Cheltenham. There Edith had carved out a new life, becoming a prominent member of the local church. She also had new friends. Convinced Tolkien’s silence meant he no longer cared for her; she had agreed to marry George Field, the brother of her friend Molly. So she refused Tolkien. However, she agreed to meet with him again.

On January 8, 1913, the couple reunited at Cheltenham station. After hours of talking, Edith finally agreed to marry Tolkien. Luthien had to give up her immortality, home and family to be with Beren. Edith also had to make sacrifices. By jilting George, she had lost her best friend. However, to marry Tolkien, Edith also had to give up her religion and become a Catholic. Once Edith made this decision, the staunchly anti-catholic Jessops asked her to leave their home and Edith settled in Warwickshire, waiting out the time between her engagement and marriage.

The Influence of World War I

When the First World War began on July 28, 1914, Tolkien did not immediately enlist. Instead, he continued his studies in Oxford, achieving a first class degree in June 1915. It was only then that Tolkien enlisted as a Second Lieutenant in the Lancashire Fusiliers. While waiting to embark for France, he married Edith on March 22, 1916, at St Mary’s immaculate Roman Catholic Church in Warwick. That summer Tolkien was sent to the front. He later remarked to his son, Michael, how much admiration he had for Edith marrying a penniless man who had not yet embarked upon his career and who was probably going to die in battle.

In this respect, Edith’s situation once again echoed that of Luthien who gained little but lost much because of her love of Beren. The couple’s early-married life also echoed that of Tolkien’s fictional couple. Edith denied a permanent home, followed Tolkien around his various camps in England- rather like Luthien following Beren on his impossible quest. However, unlike Luthien, Edith could not follow Tolkien into battle. However, after four months on the western front, during which he survived the Battle of the Somme, Tolkien was back in England.

Like Beren, who was the last survivor of a group of men who had tried to resist the dark enemy, Morgoth, after his conquest of the far north of Middle Earth, Tolkien was the last survivor of his old band of literary school friends. However, unlike Beren, he was not driven into the elven realm by defeat, but back to England because of trench fever. Tolkien spent the next year commanding a garrison in Yorkshire while he recuperated, at the same time trying to come to terms with the horrors of war and the death he had experienced.

It was during this time, in 1917, when Tolkien was stationed near Hull, that he and Edith went walking in woodland near Roos. There, in a grove of flowering hemlock, Edith began to dance and sing for Tolkien- and Luthien was born. “In those days her hair was raven, her skin clear, her eyes brighter than you have seen them, and she could sing – and dance, ” Tolkien wrote to Christopher in 1972.

Tolkien created Luthien to match the exact physical likeness of his wife on that day- and to capture her musical talent, which led Beren to give his elven princess the nickname of “Tinuviel” or nightingale. That day in the hemlock woods was not just the day that Luthien was born; it was a precious moment from the early marriage of Tolkien and Edith, which he captured forever in the story of Beren and Luthien. It was a moment of peace, tranquility, and hope after the horrors of war, not only for the fictional Beren but also for his creator.

Beren and Luthien, who both died but were brought back to life by Mandos, the judge of the Elven dead, were to have their happily ever after. One of their descendants was Elrond, who was immortalized in the Lord of the Rings while the couple was also the ancestors of the Numenorean Kings. After the Great War had ended, Tolkien and Edith were also free to settle down to enjoy the rest of their life together. They had four children, John, Michael, Christopher and Priscilla, the last being born in 1929. Tolkien settled into life as an Oxfordshire professor- and eventually as a much-beloved writer.

However, as Luthien had given up her immortality as an elf, along with her home and family, to dwell with Beren in the world of men, Edith seemed to be condemned to a similar exile. She had given up her religion, which she had found profoundly satisfying. Unfortunately she found that Catholicism was something she could not engage with. Additionally, while her husband went from strength to strength with his academic career, she had to give up any hope of developing her own musical talent to run a home and raise a family.

Worse yet, as Luthien must have felt lost in the world of men, so Edith did in Oxford. She found the academic atmosphere intimidating and felt her lack of academic education left her an outsider. For this reason, she did not return call from the wives of other academic members of staff. Tolkien, meanwhile, was spending more and more time with his male friends and colleagues, preferring to discussing his writing and intellectual interests with them rather than his wife.

Although the couple remained in love, a certain distance began to develop between them. Edith gave up going to mass to please Tolkien and the couple began to sleep apart because of Tolkien’s snoring. As the children grew older, they even went on holiday separately. Edith’s health began to decline and she started to suffer from headaches that could keep her in bed for days. It wasn’t until Tolkien’s retirement in 1959 that Edith probably felt she achieved her happily ever after, when Tolkien finally brought a new modern house for them in Bournemouth.

Edith had long seen Bournemouth as a haven. The new house was easier to manage and allowed her to enjoy the town she loved. It was also a haven for Tolkien from his growing army of fans. The last years of the couple’s life were spent dedicated to each other. However, when Edith died in November 1971, Tolkien returned her remains to Oxfordshire, inscribing her headstone: “Edith Mary Tolkien, Luthien, 1889-1971”. In 1973, his own name and dates, suffixed with the name Beren were added. Now the world knew that Edith ” she was (and knew she was)” Tolkien’s Luthien.