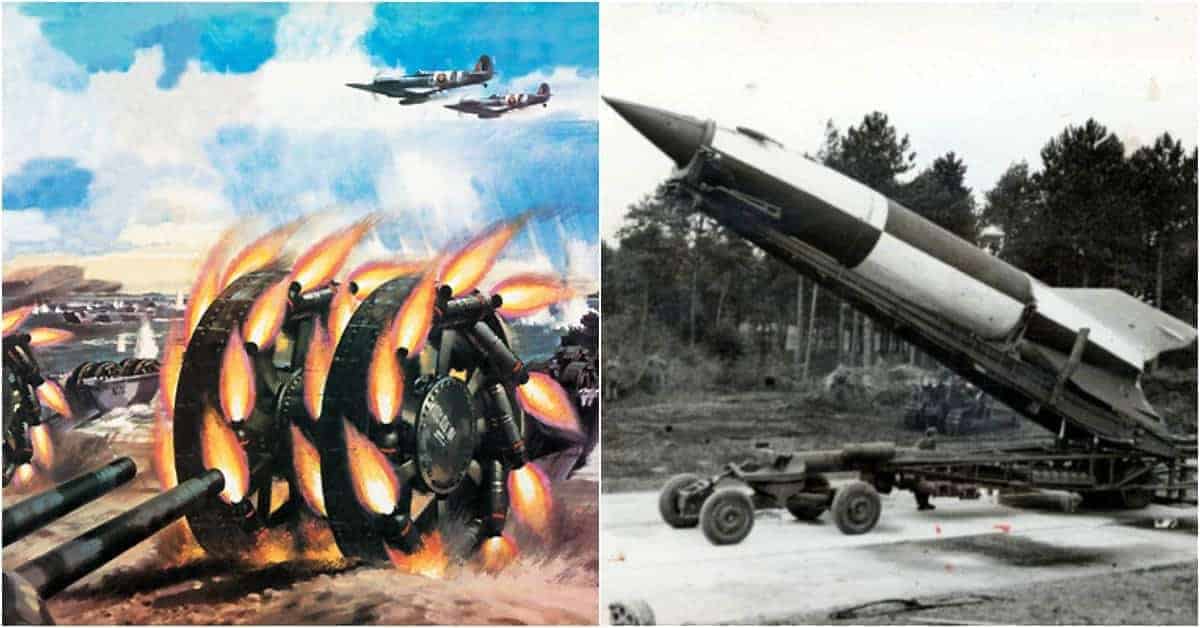 The Panzer VIII Maus was the heaviest tank ever built, measuring about 33 feet long, 12 feet wide, 12 feet high, and weighing nearly 200 tons. Its secondary armament was a 75 mm coaxial gun instead of a machine gun, while its main gun was a 128 mm monster capable of destroying any Allied tank at ranges of up to 2.2 miles – and that was increased at Hitler’s insistence, who thought the 128 mm looked like a toy gun on the Maus, to 150 mm.

The Maus’ huge size and heavyweight came at a correspondingly heavy price that made it nearly useless. The tank was too heavy for most bridges, so it had to resort to crossing rivers either by wading through fords where available, or driving over the river’s bottom while using a snorkel for ventilation. Additionally, simply getting the Maus moving was a problem, as it was no easy task developing an engine and drive train that was powerful enough to propel 200 tons of metal on the ground at any appreciable speed, yet small enough to fit inside the tank. In the end, the maximum speed achieved during trials was 8 m.p.h. on a hard surface.

It was intended to spearhead German attacks by smashing through any opposition and destroying all enemy armor it came across, impervious to damage from any tanks whose path it crossed. With 9.4 inches of turret armor, 8 inches of hull front armor, 7 inches of hull side armor, and 6 inches of rear armor, the Maus was largely immune from Allied tanks, whose shells would simply bounce off the behemoth. However, it was built in 1944, by which time the Allies not only had aerial superiority on both the Western and Eastern front, but well nigh complete aerial supremacy over the battlefield, and the Maus did not have sufficient armor up top to render it immune from armor-piercing bombs or rockets dropped or fired from above.

Ultimately, the Maus was symptomatic of Hitler’s irrational obsession with big things and superweapons, and his indifference to or inability to understand their relative cost-effectiveness compared to other “normal” weapons that could accomplish the same task at a fraction of the cost, thus freeing up scarce resources for other uses that could have better served the German war effort.

The Davy Crockett Weapon System was a smoothbore recoil-less rifle that fired a tactical nuclear explosive to a range of up to 1.25 with the M-28 version of the weapon, and later up to 2.5 miles with the M-29 version. Developed during the Cold War in the 1950s, over 2000 Davy Crocketts and their launch systems were deployed with US ground forces in West Germany and Korea from 1961 to 1971.

The weapon was notoriously inaccurate – although pinpoint accuracy was not a priority, considering its warhead. The Davy Crockett’s deadliness stemmed more from its radioactivity than from its explosive yield: its warhead produced an instantly lethal dose of radiation within a 500-foot radius, and an incapacitating and likely fatal dose within a quarter-mile radius. As such, the weapon was more of a broad area radiation dispenser than a surgical smart bomb.

In addition to the long term contamination hazard, the weapon was dangerous to its own users: there was always the risk that the firing team, and other NATO personnel in the vicinity, would themselves fall victim to radiation from their own side’s tactical nuclear warhead exploding 1.25 miles away from the point of firing (the maximum range of the M-28 atomic gun), to 2.5 miles distant (range of M-29 version).

The weapon’s greatest danger however was the fact that it was deployed at all, and deployed very low down the chain of command at that, placed under the complete control of three soldiers roaming the battlefield in a Jeep, who, in practice, would have been able to fire a nuclear weapon it at their own discretion. Shockingly, it took ten years before the Pentagon decided that it might be unwise to give a lieutenant, a sergeant, and a corporal, the discretion to fire the opening shot in what might quickly escalate into a global nuclear holocaust.

The West Germans in particular were enthusiastic about deploying the Davy Crockett with their ground forces, but were turned down by the US because the manner in which they proposed to incorporate the weapon into their defensive strategy would have made its use nearly automatic as soon as the war began. That was undesirable because it would have eliminated NATO’s option to fight without using nuclear weapons and risking an escalation from tactical nukes in the battlefield to nuclear armageddon.

The Firearm Blog – The Worst Pistol Ever: Type 94 Nambu

Hotcars – 10 Crazy Facts About the Panzer VIII Maus, The Biggest Tank Ever Built