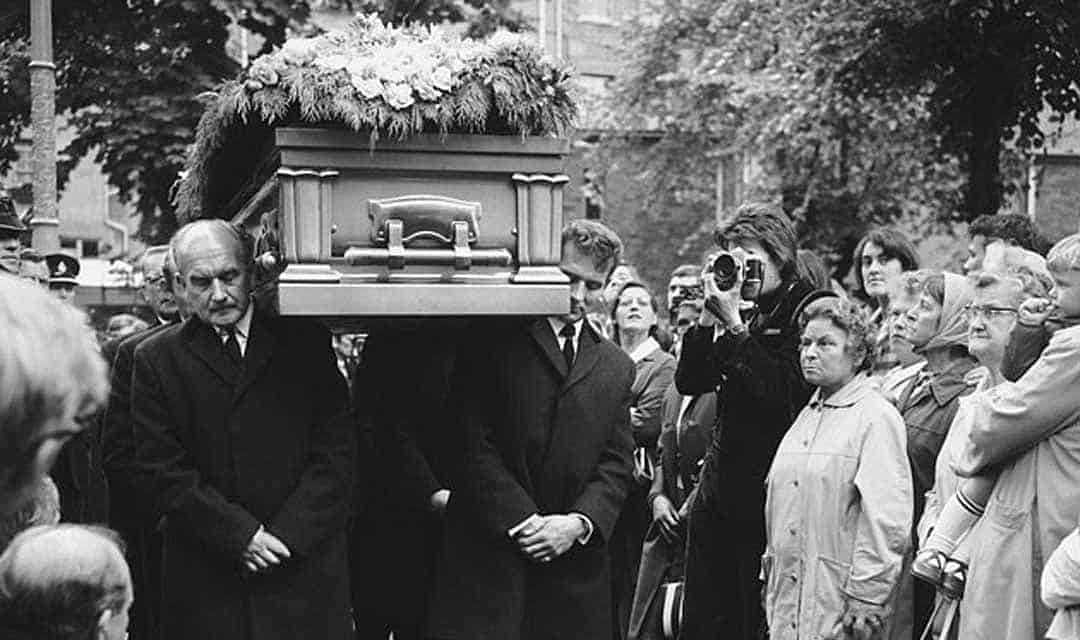 15. Chris Bell and the band Big Star helped birth the power pop genre in the 1970s

Chris Bell was a songwriter, singer, and guitar player at the forefront of a musical movement which was known as power pop, and which eventually included bands such as REM, the Afghan Wigs, and Beck (as well as the execrable The Knack). Bell was less well-known in life than he became after his death, and his main contribution to the music world, at least on record, was 1972’s #1 Record, released by Big Star that year. Although other recordings with Big Star followed, and fellow musicians cited the band and Bell as influences throughout the decade, major commercial success was elusive. By the latter part of the decade, Bell was working almost exclusively as a solo performer and recording new recordings which emphasized his growing empathy with Christian music, some of which was released posthumously.

Bell was 27 year of age when he was killed in a car accident on, ironically, December 27, 1978. The sports car he was driving inexplicably left the road in the wee hours of that date as he was returning home following a recording session, striking a telephone pole, killing the artist instantly. Following his death his work found a new audience, chiefly among musicians, among them the bands The Posies and Cheap Trick. By the late 1990s one of Bell’s songs was featured on the television sleeper hit That Seventies Show. His music also appeared in film soundtracks and in covers by other power pop bands of the 1980s. By the summer of 2013 Bell’s life and the music of Big Star were the subject of a documentary film entitled Big Star: Nothing Can Hurt Me.

16. Jacob Miller was a star in Jamaica of similar magnitude as Bob Marley

Rastafarian and reggae star Jacob Miller was all but unknown in the United States over the course of his career, other than to fans of the style of music known as reggae, first popularized in America by Bob Marley and the Wailers. In Jamaica he was a popular performer and his services as a musician were in high demand. His band, Inner Circle, gained a level of fame by performing popular American tunes in reggae style, drawing the attention of, among others, Keith Richards of the Rolling Stones and blues guitarist Eric Clapton. Miller was a singer, and his humorous repartee between his fellow performers and members of his audience became a signature part of his appearances. By the late 1970s he had recorded albums released internationally by Capitol Records, and he appeared to be poised for greater recognition and success.

By the beginning of the 1980s Miller was known for both his often outrageous performance antics, which included smoking pot onstage while wearing a policeman’s hat, and exchanging humorous barbs with fellow reggae artists including Marley and Peter Tosh. In 1980 his career came to an abrupt end when he was killed in a car accident, along with his son, in Kingston, Jamaica on March 23, 1980. Miller had been in rehearsals for an upcoming American tour with his friend and sometime collaborator, Bob Marley, who would himself succumb to cancer less than a year later. A concert documentary film, Heartland Reggae, recorded in 1978, remains one of the defining artifacts of his short career.

17. Masako Natsume earned fame in the west from the TV series Monkey

Masako Natsume was a Japanese actress whose first big break occurred when she appeared in commercials for a sunscreen product, in the role of “Kooky Face”. The ads proved so popular that she recorded a song which became a minor hit in Japan, using a play on the preceding character name in the title Oh! Cookie Face. A celebrity in Japan, she achieved international acclaim when the BBC broadcast the television series known in Japan as Saiyuki. English dialogue was overdubbed and the program broadcast on BBC 4 under the title Monkey. Eventually the program was broadcast in South America, Europe, and the United States, though as of 2019 the English dubbed version had yet to be seen in America. Japanese language versions have been broadcast in California.

By the mid-1980s Masako was in demand as an actress in Japan, and was a cult heroine in several English speaking countries due to the BBC version of Monkey. In 1985 the young star died, of complications from leukemia, but not before having uttered several lines in Japanese films which became popular catchphrases in her home country. She was 27, and her popularity in Japan, England, and Western Europe led to her inclusion in the 27 Club. She is not the only actor to be a member, Anton Yelchin of Star Trek fame (the reboot version of Pavel Chekov), Jonathan Brandis, and Joseph Merrick – who gained worldwide fame as the Elephant Man – are among others.

The 27 Club first gained extensive notice with the rapid succession of deaths which included Brian Jones (forgotten today, but the most popular of the Rolling Stones in the 1960s), Jimi Hendrix, Janis Joplin, Jim Morrison, and others. The coincidence of their similar ages at the time of their demise became fodder for writers and occultists following their deaths. Recently more notice has been given to another number, 33, already attractive to mythologists as it was the age at which Jesus of Nazareth died, at least according to most Christians. Several stars have met their ends at the same age, leading to the belief in yet another club, which has become known as, unsurprisingly, the 33 Club. As with their eternally younger comrades, there are several noted performers holding membership in the club, for similarly diverse reasons.

Sam Cooke is one such member (justifiable homicide by a female acquaintance). Actress, comedienne and wife of Clark Gable, Carole Lombard makes the list of the 33 Club (plane crash). Bon Scott, who with AC/DC sang of Dirty Deeds Done Dirt Cheap, presumably while on the Highway to Hell, is another member (acute alcohol poisoning leading to death by misadventure). Actor John Belushi (overdose of heroin and cocaine mixture), King Richard II of England (starved to death in captivity), and Eva Braun (picked the wrong boyfriend), are all members of the 33 Club, the list of which also includes David Koresh, Timothy McVeigh, Chris Farley, Evita Peron, Saint Catherine of Siena, and Mama Cass Elliott, to name just a few.

19. The 27 Club shows no indication of slowing down its membership drive

Though many members of the 27 Club are listed on most sites which describe the phenomena based on their age, rather than the fame or notoriety they achieved in life, new members are assigned to the group with somewhat disturbing regularity. Following the addition of Badfinger’s Pete Ham, few of the members of the group enjoyed a similar level of fame in life as the earlier members until one day in the spring of 1994, when Nirvana front man and to many the face of the grunge movement joined the group by committing suicide with a shotgun. Kurt Cobain’s death re-invigorated curiosity regarding the 27 Club, and since his entry several others have unfortunately occurred which have kept interest in the group in the public eye.

Two months after Cobain’s untimely though self-inflicted demise, Kristen Pfaff, another Seattle grunge scene musician and well-acquainted with Cobain (they were close friends according to some accounts), died of a heroin overdose. She too was 27. Several rap stars and rising stars have joined the club, including Stretch, Freaky Tah, and Fat Pat, all of whom gained entry by being the victims of murder. In 2011 singer Amy Winehouse became a member after her death from alcohol poisoning. The list continues to grow in the 21st century, and substance abuse, or the negative side-effects of substance abuse, continues to be the leading cause of death which provides unfortunates with the somewhat dubious honor of being members of the 27 Club.

20. Some are believed to be in the club that are not

Buddy Holly is sometimes attributed as being a member of the 27 Club, though he is not, having lost his life at the age of 22 in a plane crash. Richie Valens, of La Bamba fame, and a victim of the same accident, was but 17 years of age. Eddie Cochran (Summertime Blues) was 22 when he was killed in a car accident, and Patsy Cline was already 30 years of age when she died in a plane crash. On the other hand Rudy Lewis, who was the lead vocalist for the Drifters’ hits Up On the Roof, and On Broadway, was 27 at the time of his death in 1964, though he is often not included in lists of the 27 Club, for reasons unknown. Otis Redding died in an airplane crash in 1967 at the age of 26, and is often included in lists of the 27 Club, at least less well-researched editions.

Guitarist Duane Allman, killed in a motorcycle accident in Georgia in 1971, was 24. Berry Oakley, Allman’s bandmate, close friend, and fellow motorcyclist, was killed in a similar accident only three blocks from the scene of Allman’s. He too was 24. Guitarist Tommy Bolin died of a drug overdose at the age of 25, Marc Bolan at 29, and Sid Vicious, who made punk much more than just a musical style, was 21 when his heroin use got the better of him. The 27 Club is an unusual list of several coincidences, but it is by no means the complete list of early deaths endured by rock’s musical stars and those who aspired to be stars before the fates intervened.

“The Devil’s Music: The Life and Legacy of Robert Johnson”. Richard Havers, Discovermusic. May 8, 2019. Online

“Dicky Pride”. Steve Walker, TIM This is My Story. Online

“Riders on the Storm” My Life With Jim Morrison and the Doors”. John Densmore. 1991