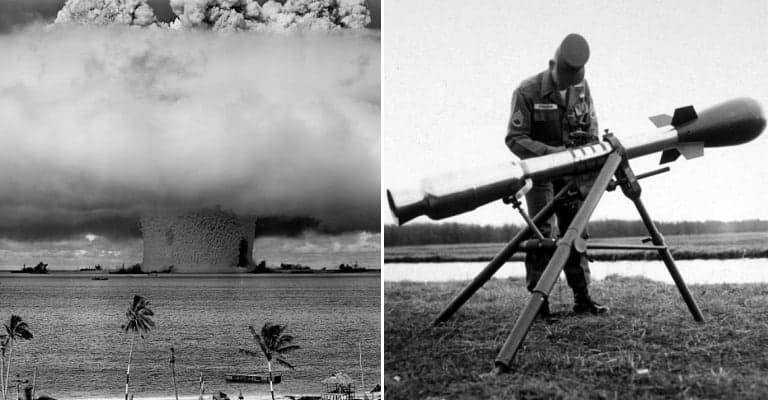 Two of the three legs of the American nuclear defense Triad were under the control of the United States Air Force’s Strategic Air Command, which was first activated in 1947 (SAC controlled the ICBMs and the manned bombers). Several US bombers, beginning with the B-29, were designated as aircraft to be used to deliver the atomic, and later the thermonuclear bomb, to targets within the Soviet Union and their allies. Among them were the B-36, B-47, and beginning in 1955, the B-52 Stratofortress, an iconic symbol of American military might both as a nuclear delivery vehicle and as a strategic bomber during the Vietnam War, Operation Desert Storm, The Gulf War, and the War on Terror. The B-52, of which 755 were built, is expected to be continually upgraded and modernized as it has throughout its career, and remain operational within the United States Air Force through the first half of the twenty-first century.

Other bombers and fighter bombers have been designed to carry nuclear bombs as part of their mission, including the FB-111, the B-1, the B-2, and others. The purpose of the manned bomber leg of the triad evolved to become one of removing those launch sites which could not be successfully targeted by the unmanned missiles of the ICBMs and the SLBMs. As those two legs increased in both firepower and accuracy throughout the Cold War and beyond, the manned bombers became less of a first strike weapon and more of a retaliatory weapon, intended to eliminate targets which survived a first strike, and to deploy if necessary against military concentrations and targets of opportunity. All three legs of the nuclear triad remain in place, and all three continue to upgrade and modernize their weapons and their mission in response to changes regarding the perceived threats to the United States and its allies.

From the beginning of the Manhattan Project, British and Canadian scientists, engineers, technicians, and military personnel were involved with the effort to develop, produce, and deploy the atomic bomb and its subsequent iterations. Since the route Soviet missiles and bombers would take during an all-out nuclear attack against the United States would for large part be over the Arctic, the early warning system required the United States to detect a Soviet incursion over Canadian air space, and to respond to one in time. NORAD divided North America into three distinct regions, the Alaskan Region, under the auspices of the US Eleventh Air Force; the Canadian Region, the defense of which comes under the command of the First Canadian Air Division; and the Continental US region, under 1st Air Force. There are smaller divisions within the major commands, including Canada being divided into eastern and western regions.

NORAD was born in 1957, and the following year the Americans and Canadians agreed that command of NORAD would always be held by an American officer, with the Vice-Commander being a Canadian. The nations agreed that NORAD’s primary responsibility would be the defense of the North American continent by providing early warning and defense for the retaliatory forces of the Strategic Air Command. For the first decade of its existence Canada and the United States worked closely together to create seamless communications. NORAD has been reorganized several times, but for six decades Canadian-American cooperation and shared responsibilities and expense has maintained a vigilant protective curtain over the North American continent. As a whimsical note, every year since its inception NORAD has continued the tradition of its predecessor by tracking and reporting the progress of Santa Claus as he makes his rounds on Christmas Eve.

Beginning in the 1950s and continuing through the 1960s, and in some cases beyond, the United States and the Soviet Union developed miniature nuclear weapons for use as mines and demolition charges. The weapons were intended to be used on the battlefield as a means of destroying advancing troop formations, forcing them to use routes which were advantageous to defending troops, or changing the extant landscape in a manner which was beneficial to the defenders. The W54 warhead developed for the Davy Crockett weapons system was the basis for the design of many of these weapons, but other, even smaller nuclear weapons were adapted from it for specialized use. The Tactical Atomic Demolition Device (TADM) was a portable nuclear weapon, resembled a section of culvert pipe, and about 850 pounds. The weapon was in production from 1961 – 66, when it was withdrawn from deployment in Europe.

Following the collapse of the Soviet Union, and with the knowledge that Soviet nuclear weapons were scattered throughout several of the former Soviet Socialist Republics, the United States and former Soviet military leaders created the Cooperative Threat Reduction (CTR) program, to ensure that all of the miniaturized Soviet nuclear weapons were located and destroyed. Euphemistically called “suitcase” bombs, these weapons posed a special concern should they fall into the hands of groups such as Chechen rebels (to the Russians) or rogue nations and terror groups (to the west). Despite persistent rumors of the existence of such weapons, no weapon or components of size compatible with the suitcase description has ever been found, or at least such a finding has never been made public. The potential existence of such weapons is a special concern of security specialists dealing with the global war on terror.

17. The impact of nuclear weapons on the global scene

As of 2018, though several nations deploy nuclear weapons as part of their national security posture, only the United States has ever used them as part of an armed conflict, which remains the source of debate and rancor. Many argue that the use of the atomic bombs against Japan in 1945 was unnecessary, supported by the belief that the Japanese were ready to surrender and thus the bombings of Hiroshima and Nagasaki were war crimes. Others argue that the bomb could have been demonstrated rather than used on civilian population centers as a means of hastening the end of the war. These arguments ignore the facts of the situation in 1945, when the Japanese population had been trained in suicide bombing and fighting techniques, more then ten thousand kamikaze planes had been prepared for use against the invading Americans, and there was little demand for surrender within the Japanese population or military.

The atomic bombing of Nagasaki was made necessary by the Japanese refusing to respond to demands for immediate unconditional surrender following the bombing of Hiroshima, which while a horror in itself did not result in as many Japanese deaths as had the firebombing of Tokyo using conventional bombs. Even after the second atomic bomb was dropped on Nagasaki, the Japanese did not offer unconditional surrender, instead demanding that they be allowed to retain their Emperor on the throne in the postwar world, a condition which was granted by the Allies, despite having one remaining atomic bomb ready to be dropped at the time. The dropping of the two atomic bombs hastened the end of the Pacific War, along with the Soviet invasion of Japanese held territory. In doing so they saved countless thousands of lives, Americans, British, Australians, Russians, and Japanese.

18. The atomic bomb and culture

In the 1950s the atomic bomb changed world culture, in political discourse, literature, comic books, films, television, music, and even fashion. The new two piece women’s swimwear was given the name bikini by its designer, after the atoll which was by then too hot to occupy. Nuclear fission created nuclear fiction. Nuclear explosions and radiation became plot devices in all sorts of entertainment. Nuclear weapons were used to battle and create monsters of all types, from Godzilla to the Blob. They were deployed against invading aliens, and the creation of a doomsday machine, which would destroy the world of its own accord, appeared in several novels and films, including the black comedy Dr. Strangelove. It was an irradiated spider which was responsible for the birth of Spiderman, and atomic bombs were featured in the creation stories for a new religion, Scientology.

The Cold War and the threat of nuclear annihilation brought about literature based on espionage, sabotage, and the capture of nuclear weapons and facilities by both sides of the socio-political divide. It became a major debating point during national elections; in 1960 John Kennedy warned of the growing “missile gap” between the United States and the USSR, at a time when US nuclear weapons outnumbered those of the Soviets by a factor of more than 8 to 1. Throughout the 1960s, 70s, and 80s, the Soviets and the United States engaged in an arms race which centered around nuclear superiority, as well as the means to protect their respective nuclear arsenals, including submarines and anti-submarine warfare capability, missiles and tracking satellites, better and faster bombers, and massive espionage programs. The atomic weapons programs of several nations have dominated international diplomacy since 1945, and no doubt will continue to do so for the foreseeable future.

“In Mortal Hands: A Cautionary History of the Nuclear Age”. Stephanie Cooke. 2009

“Where Does NORAD’s Santa Tracker Really Come From?” Yoni Applebaum, The Atlantic. December 24, 2015