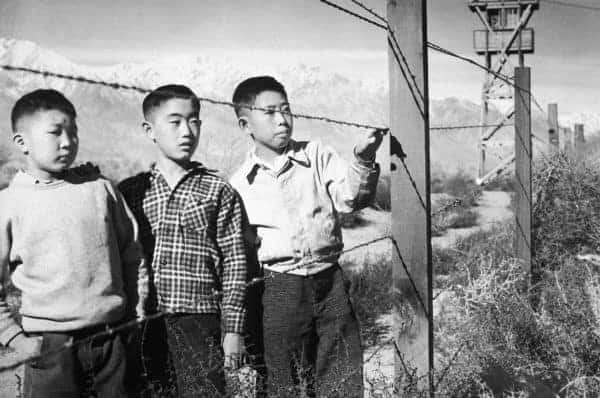 The Supreme Court Found the Internment Camps to be Constitutional

Today it is easy to look back and know that Japanese internment was wrong. That there was no reason to deprive more than 100,000 American citizens of their liberty for no other reason than their heritage. Most them had very little in common with the enemy that the United States was fighting and felt just as attacked as the rest of America when Pearl Harbor was bombed.

On February 19, 1942, President Roosevelt issued Executive Order 9066 which provided for the creation of military areas from which any or all American citizens might be excluded. Proclamations followed that created military areas out of much of the West Coast. Once the military areas were created it was deemed that any Japanese, German or Italian aliens or any one of Japanese descent be excluded. Civilian Restrictive Order No. 1 would be issued on May 19, 1942 and it forced Japanese Americans into relocation camps.

Fred Korematsu refused to leave the military area and even got plastic surgery in order to avoid being sent to an internment camp. He was eventually arrested and convicted. However, he argued that Executive Order 9066 was unconstitutional and his case went all the way to the Supreme Court. The order was found to be constitutional in a 6 to 3 decision.

The court found that the need to protect the country from espionage outweighed the individual rights of Fred Korematsu and other Americans of Japanese descent. Korematsu’s conviction was eventually overturned but the Supreme Court ruling still stands. The case is now seen as so flawed that it is now used as an example of bad legal decision making and it is therefore not even considered to be precedent by most people.

The Conditions Were Akin to a Prison Camp

Internment camps were designed to house up to 18,000 people and several camps were created to house the more than 120,000 people that were forcibly detained. The camps would include schools, post offices, warehouses and hospitals. There was a communal mess hall, latrines and laundry. The entire camp would be surrounded by barbed wire and guard towers.

The internees were placed into barracks. Each barrack block would have a mess hall, a recreation building, a laundry area and a wash area and latrine. Each barrack would have four to six one room apartments. The apartments would range in size from 15 by 20 feet to 24 by 20 feet. Families or groups of people would be placed in each apartment with as many as 8 people in one space. There were often complaints about the lack of privacy because the partitions between apartments did not reach to the ceiling which allowed sound to travel throughout the entire barrack.

The camps were based on military style barracks which made them ill-suited for family life. They were also constructed very quickly which meant that they were poorly constructed and were missing many things necessary for families to live comfortably. The camps were often built in the desert or areas that were largely deserted. This meant that winters were bitterly cold and at times internees would bank earth against the walls of the barracks in order to try and keep out the cold. Some internees were not informed they were being sent to colder climates and therefore had no clothes to keep warm through the winter.

The government did provide food in the mess halls at a cost of 45 cents per day. Meals were often a source of complaint as there was only one option for meals and the first generation of immigrants often wanted more Japanese foods while the Nisei wanted more American foods. Additional food options were available for purchase from the stores at the camps. One of the few ways that a internee could leave was by attending college, provided they found a college willing to take them and they passed FBI background checks.