Crime and Punishment: 5 Most Controversial 'Trials of the Century' 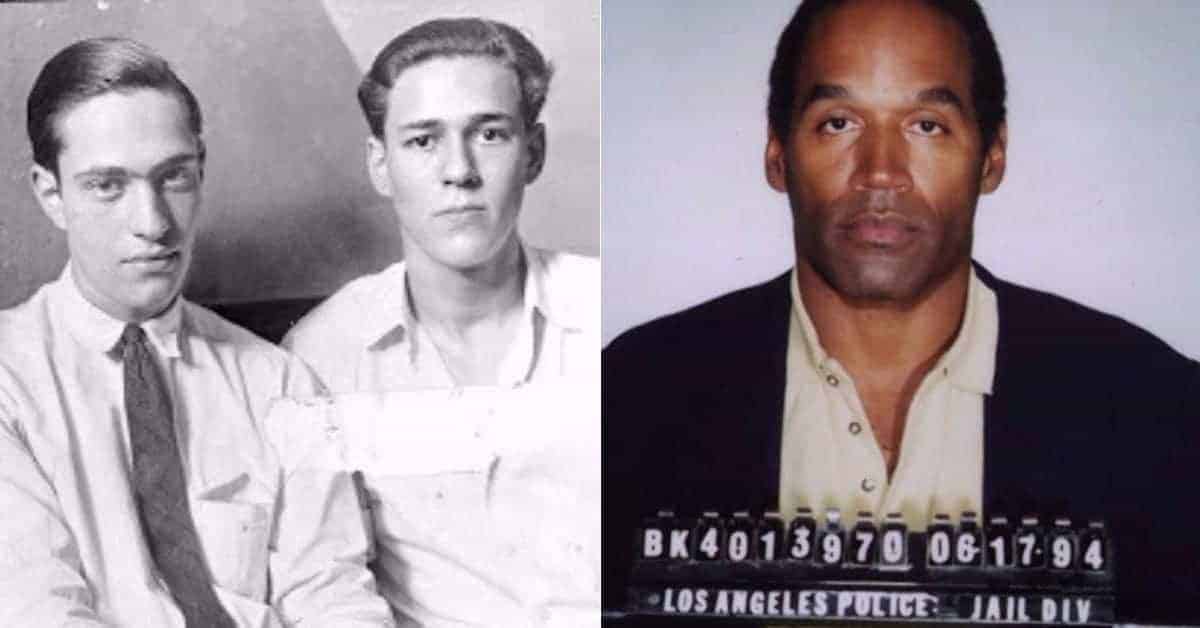 Crime and Punishment: 5 Most Controversial ‘Trials of the Century’

Charles Lindbergh became an international hero when he completed the first solo non-stop transatlantic flight from Long Island to Paris in 1927. Two months after his flight, he went on an international book tour to promote his autobiography. While touring, he met Anne Marrow whom he married in May 1929. The couple lived in rural New Jersey and on June 22, 1930, Charles Lindbergh, Jr. was born. On March 2, 1932, a strange noise was heard around 9:30 pm. When the nurse went to check on the toddler at 10 pm, he was not in his bed. Within 20 minutes, the police arrived at the Lindbergh home and began their investigation. Left behind was a ransom note sitting on the nursery windowsill and a homemade wooden ladder.

News of the Lindbergh baby kidnapping quickly spread throughout the world. On March 16th, the boy’s sleeping suit was delivered to a mediator. A ransom of $50,000 gold certificates was placed in a custom-made box and delivered on April 2, 1932, but the baby was not returned. On May 12th, a delivery driver near the Lindbergh home pulled off the road to urinate. When he looked down he saw a dead toddler, partially eaten by animals, badly decomposed, with a fractured skull. Over 30 months local law enforcement continued to investigate the kidnapping and murder. At times, gold certificates made their way back to New York City banks. On one occasion, a teller noticed a certificate had a New York license plate number written on it.

Authorities contacted the gas station where the certificate came from and found that the holder of the certificate had acted “suspicious” and was probably a “counterfeiter.” The plate belonged to Richard Hauptmann, a German immigrant with a criminal record. Upon his arrest, he was carrying a $20 gold certificate. He was charged with kidnapping, murder, and extortion. Reporters swarmed the Hunterdon County Courthouse in Flemington, New Jersey. The Daily Mirror hired a defense attorney for Richard Hauptmann in exchange for an exclusive to print his story. The prosecution convinced the court that Hauptmann kidnapped and murdered the toddler based upon the custom-made box and the same wood used to make the ladder in his apartment. Hauptmann was found guilty and quickly sentenced to death in the electric chair.

Hauptmann appealed his sentence in June 1935 and received clemency from the governor. When that ran out, he again requested clemency but was denied. In a last-ditch effort to save his life, the Hearst group wanted Hauptmann to confess in exchange for a life sentence and an exclusive story, to which he declined. He was executed on April 3, 1936. Numerous theories still surround the guilt of Hauptmann. Some believe that the investigation into the kidnapping and murder was sloppy, that the local police permitted Charles Lindbergh to have too much control over the investigation, while others believe Hauptmann committed the crime but did not deserve to die. One theory states that the baby was born with a physical disability and that Charles Lindbergh arranged for the toddler to be kidnapped and sent to Germany.

O.J. “The Juice” Simpson was an international star. A professional football player, he also appeared in commercials, television shows, and sports programs. In 1975, People magazine stated that OJ was “the first black athlete to become a bona fide lovable media superstar.” During the early morning hours on June 13, 1994, the LAPD discovered the murdered bodies of O.J.’s ex-wife Nicole Brown Simpson and her friend Ronald Goldman. Both had been stabbed to death. O.J. Simpson was not home when the police arrived to notify him of his ex-wife’s murder, but detectives noticed splattered blood in Simpson’s white Ford Bronco.

With enough probable cause, an arrest warrant for O.J. Simpson was issued. The LAPD arranged for Simpson to turn himself in at 11 am on June 17th. Hundreds of reporters waited outside the police station for O.J.’s arrival. When he did not show up, the LAPD issued an all-points bulletin. One member of O.J.’s defense team read a letter written by the Juice that gave the impression that O.J. was going to kill himself. On life television, Simpson’s attorney pled for him to surrender. Shortly after the news conference, Simpson’s with Ford Bronco was spotted on the interstate. The driver told police that O.J. was in the backseat with a gun to his head.

The slow-speed chase was a media circus. Major television networks carried the chase and at one time, there were nine helicopters following the Bronco and police form the air. Several family members and friends appeared in front of live cameras pleading for O.J. to surrender, that they loved him, and to not take his own life. When the trial for the People of the State of California v. Orenthal James Simpson began in January 1995, people had little choice but to pay attention as the coverage was everywhere all of the time. Everything about the trial was scrutinized, including the education level of the jurors, their race, and gender. After eleven months of constant coverage, the jury reached a verdict. Millions around the world watched live when the verdict of not guilty was read on October 3, 1995.

In the aftermath of the not guilty verdict, the families of Nicole Brown and Ron Goldman sued Simpson for wrongful death. A jury found Simpson guilty and the judge ordered him to pay over $33 million in damages. Simpson began selling his assets to raise the money for the wrongful death settlement. In 2007, Simpson, along with others, was arrested for breaking into a hotel room and stealing sports memorabilia, which Simpson claimed was his. Found guilty he was sentenced to 33 years in prison. Simpson was granted parole on July 20, 2017, and can be released after October 1, 2017. The drama surrounding the murders and trials led to numerous made-for-TV movies, a critically acclaimed miniseries, and hundreds of print publications.

Medium – The Girl on the Velvet Swing

All That’s Interesting – “The Trial Of The Century” – A Sordid Tale Of Sex, Jealousy, And Murder In High Class Manhattan

Philosophy Now – Nietzsche’s Übermensch: A Hero of Our Time?

Biography – Inside the Mysterious Lindbergh Baby Kidnapping and Trial

Time Magazine – How the O.J. Simpson Verdict Changed the Way We All Watch TV