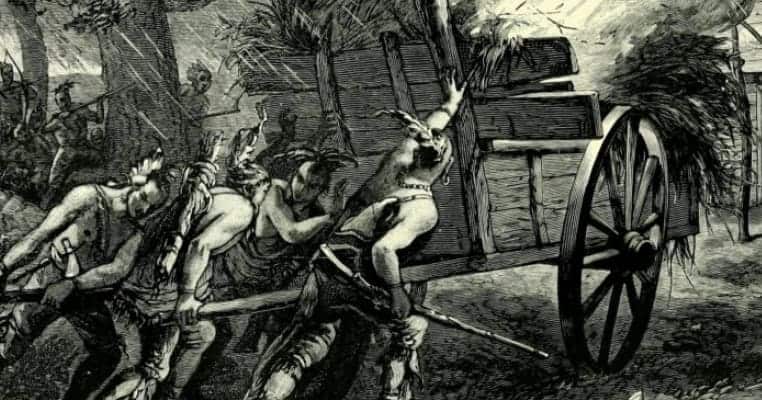 In Massachusetts, British settlers were frequently murdered by Native Tribes allied with the French during King George’s War. In response, the colony issued a bounty for the scalps of Native men, women, and children. New York passed a similar law the next year. Over the next few decades, these types of bounties became increasingly common. In 1756, Pennsylvania Lieutenant Governor Robert Morris declared war upon the Delaware tribe, offering, “for the scalp of every male Indian enemy above the age of twelve years, produced as evidence of their being killed, the sum of one hundred and thirty pieces of eight.”

The idea that you could receive a bounty for Native American scalps became a common part of the colonial experience. And the cycles of violence and warfare between settlers and Native Americans reinforced the system in practice and in the minds of settlers. Hannah Duston was a woman from Massachusetts who was kidnapped by a tribe of Native Americans and led off into captivity. But one night, she broke loose and killed several of her captors with a hatchet. She fled to safety, but not before making sure to collect their scalps to turn them in for the standing bounty.

Scalping was and is seen as a particularly barbaric custom. It was designed to spread fear. So in times of war, scalp bounties became a useful tool for psychologically attacking opponents. As the French and British began establishing colonies in the New World, their conflicts began spilling over from Europe. Colonial wars broke out frequently between the two nations. And in the New World, each side was allied with different tribes of Native Americans. The colonial governments had already been offering bounties for Native American scalps. Now, they extended those bounties to colonists.

When the American Revolution began, accusations that each side was paying Native Americans to scalp their enemies began to fly. Though there’s no evidence to support it, one British commander was nicknamed the “hair-buyer general” by patriots who accused him of paying for American scalps. But when the Revolutionary War ended, the idea that paying for scalps was barbaric seemed to be forgotten. By the time America began expanding west into the Great Plains, the scalp bounties re-emerged.

On the plains, the Americans began to encounter new tribes like the Apache and Commanche. These were tribes that the Spanish settling in what is now Mexico had been at war with for centuries. Like other governments on the continent, the Spanish authorities quickly settled on scalp bounties as the best way to deal with their Native American adversaries. Now that the U.S. government was fighting Native tribes in the wilds of the South West, they too revived the tradition of offering bounties for scalps. Soon a class of professional scalp hunters began to emerge. And they weren’t always particular about where they got them.

In 1862, conflict broke out between the U.S. government and several bands of Dakota warriors in Minnesota. In response to continued raids, the Minnesota government authorized the creation of a band of volunteers. These men would receive a daily wage for their services in hunting down Dakota men in the wilderness. In addition, they’d receive a hefty bounty of 25 dollars for every scalp they brought back. This order made these men truly professional scalp hunters. They made their living tracking down and collecting scalps for the government. And similar arrangements were in place from time to time across the prairie as various states and local governments realized that a bounty system was an effective way to deal with hostile natives.

But the best place to be a professional scalp hunter in the American West was near the border with Mexico. For centuries, bands of Commanche and Apache had raided across the borders. They would strike into Mexico, carrying off livestock and killing settlers before retreating beyond pursuit into the U.S. or vice-versa. In 1835, the Mexican state of Sonora offered a bounty of 100 pesos for scalps. In 1837, an American named James Johnson struck on a novel way to collect on the bounty. He loaded a cannon and hid it in the path of an approaching group of unarmed Apaches and fired. All that was left to do was collect the scalps from the dead and dying.

With the end of the Mexican-American War, the scalping industry entered a boom period. Many veterans of the war found themselves unemployed but armed with a knowledge of the terrain of northern Mexico and the southwest U.S. More importantly, they had a familiarity with violence. Gangs of men who used those skills to pursue the trade-in scalps began to form. Sometimes working directly for the Mexican government, they pursued Native Americans through the country, hunting their scalps. John Joel Glanton and his Glanton Gang were some of the most infamous of these new scalp hunters.

Like many other scalp hunters, Glanton was a veteran of the Mexican American. Glanton had his own reason to hate Native Americans. His fiancée had been abducted and murdered by a band of Apache in Texas. In 1849, Glanton received a contract from the state of Chihuahua to hunt down a band of hostile Apache. By the end of the year, the Glanton gang had run out of Apache to hunt for scalps. But they quickly realized something that many other scalp hunters did as well: it was hard to tell the difference between an Apache scalp and one from a Mexican civilian.

The Glanton gang began murdering civilians in Chihuahua and turning in their scalps for the bounties. But within a few months, the authorities discovered what was going on and Glanton himself was the target of a bounty. Ultimately, a band of Yuma Native Americans hunted Glanton down and killed him after he murdered a group of Yuma for their scalps. Ironically, the U.S. government ultimately organized an expedition to punish the Yuma for his death. The boom period for scalp bounties ended shortly afterward. But the laws offering bounties for scalps stayed on the books for decades in many cases. And in Nova Scotia, a law offering bounties the scalps of Mi’kmaq men has never been repealed, even to this day.

“The Rhetoric and Practice of Scalping”. Zachary Brown, Journal of the American Revolution. September 2016.

“Horrific Facts About Scalping On The American Frontier”, by Mark Oliver, Listverse, July 16, 2017

“Inglorious Arizona: Before The West Had Heroes, It Had The Glanton Gang”, Ron Dungan, AZ Central, March 26, 2016

“The Scalp Industry”. J. Molinaro, American Studies at the University of Virginia. December 1997.