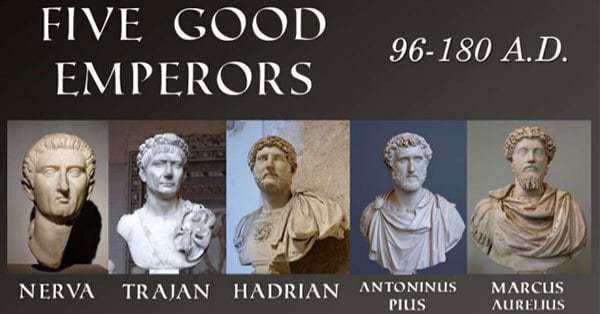 Marcus Aurelius was the last of the 5 Good Emperors, and he carried on the tradition of high-quality government established by his immediate predecessors. He was born in Rome on April 26, 121 AD and by the time he was 17, he was destined for greatness as he was named as one of the two successors to Antoninus Pius. As a result, he had an â€˜apprenticeship’ of sorts for almost a quarter of a century, so he was well-prepared when he finally became emperor. Marcus was consul in 140, 145 and 161 AD.

Although he was named as full emperor in 161 AD, he insisted that his adopted brother Lucius Varus shared the throne. Varus spent most of his reign in the military and fought in Armenia and Mesopotamia between 162 and 166 AD. He celebrated a triumph with Marcus when he returned home but soon, he was marching again, this time to Pannonia. He died from a stroke on the way back to Rome in 168 AD, so Marcus was officially the sole ruler of Rome.

Marcus spent much of his reign fighting back against invasions of the Roman frontier. He had to handle the Parthians in the east and the Germans in the north. Once Varus died, it was left to Marcus to fight on behalf of Rome. Although the threat of the Parthians was dealt with early in his reign, the German tribes were a far tougher proposition. He spent the rest of his time fighting against the Germanic tribes and banished barbarians from Italy after tribes that settled in Ravenna seized possession of the city.

Unlike the reign of Antoninus Pius which was peaceful and reasonably straightforward, Marcus’ time as emperor was marked by the worst plague and famine in the history of Rome to that point. Soldiers serving in the East brought back the sickness, and a large percentage of the Empire’s population perished. Marcus had to deal with the possible destruction of his Empire with internal and external threats, but he managed to succeed.

Although he was a warrior, Marcus was also a great philosopher which helped him become brave and just. It is possible to gain a clear insight into this great emperor’s mind by reading the Meditations which he wrote. Marcus has received criticism for his apparent persecution of Christians. He genuinely believed that the religion was the cause of many problems within the Empire which made it dangerous to the health of the people. Although he left Christians who renounced their faith alone, he ordered the execution of those that didn’t.

In 177 AD, he proclaimed his son Commodus as the joint emperor. They resumed the Danubian Wars as Marcus was determined to reverse the recent trend of defending the Empire. With the benefit of hindsight, appointing Commodus was a terrible decision as the future emperor was the first in a long line of awful rulers. However, if Marcus wanted to continue the recent tradition of choosing an unrelated successor, he would have had to execute his son.

Some historians claim he is an overrated figure; he certainly benefits from any comparison with most emperors who succeeded him. However, it should be noted that he presided over the Empire during a difficult period and ruled as well as anyone could be expected. Marcus died on March 17, 180 AD near Vienna and his ashes were returned to Rome. Commodus succeeded him and presided over a disastrous reign. The death of Marcus marked the end of the 5 Good Emperors. Little over half a century later, Rome was almost destroyed during the strife known as the Third Century Crisis. Although there were a handful of superb emperors after that, the death of Marcus could almost be seen as the beginning of the end of the Western Roman Empire.