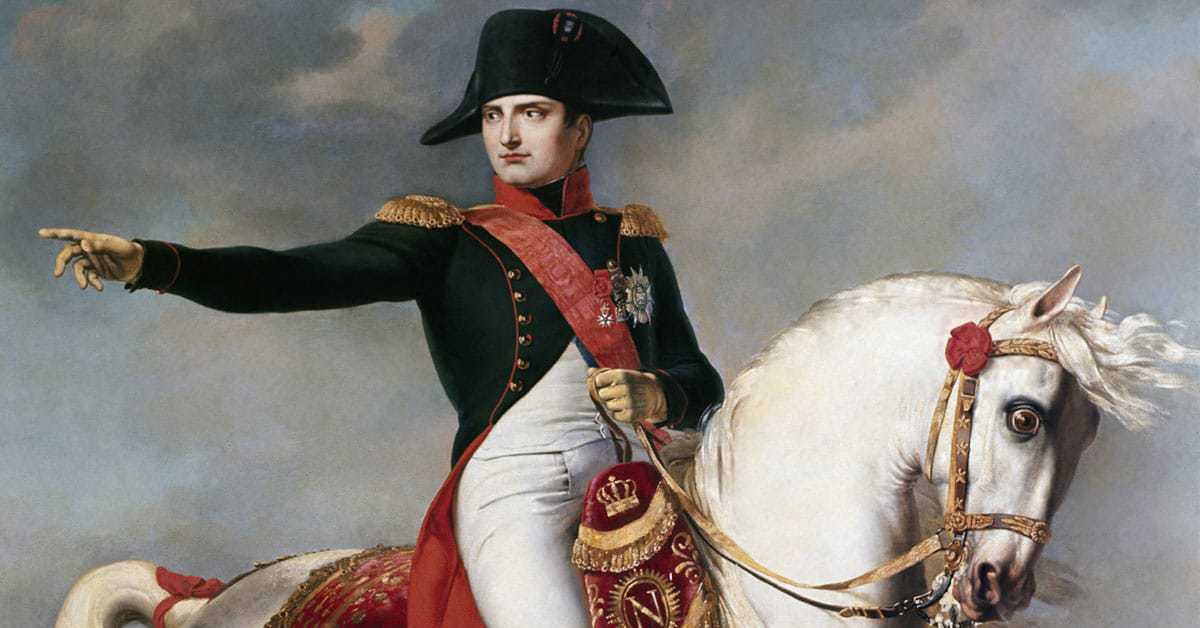 Napoleon landed in Alexandria in 1798 with an expeditionary force composed of soldiers and scholars. It was, in part, a scientific expedition, and among the numerous discoveries was that of the Rosetta Stone which paved the way for the discipline of Egyptology. Primarily, however, it was a military campaign. And at the beginning everything went just as expected. Napoleon won a series of victories, the most important being at the Battle of the Pyramids on July 21 1798. It was during this battle, which saw the almost total annihilation of the Mamluk-led Egyptian Army, where Napoleon first put into practice his infantry square formation—a tactic allowing infantry to defend themselves more effectively against cavalry under the constant cover of tightly-packed fire.

But Napoleon’s victory on land would be completely overshadowed by his defeat at sea. After days of hunting for the French fleet, the formidable British admiral Horatio Nelson finally spotted it docked in the Bay of Abukir on August 1. Through a masterful series of maneuvers Nelson managed to surround the fleet, and for three days he set about destroying the French Republic’s Navy. Only two of the 17 French ships escaped, with the French suffering up to 5,000 casualties. By contrast no British ships were sunk and only 218 men were killed (though many more, including Nelson, were wounded).

The Battle of the Nile consolidated British naval superiority; not just for the remainder of the “Napoleonic Era” but for the remainder of the century. It also irreversibly jeopardized Napoleon’s campaign. When Napoleon besieged the Syrian city of Acre between March and May 1799 the Ottomans put up a staunch resistance; foiling Napoleon’s artillery attacks by building reserve defences behind the city walls. But they were also assisted by a British flotilla under the direction of Commodore Sidney Smith, which provided additional firepower from the coast. And to make matters even worse, a plague started to spread around the French camp; one that would claim the lives of over 2,000 men by the campaign’s conclusion.

Acre was the site of one of Napoleon’s few losses. But it was a significant one. Lifting the siege he retreated to Egypt with a wilted, demoralized force. Determined to save face, however, he entered Cairo triumphantly, oversaw a final victorious land battle at Abukir (for which credit really should go to Murat) and organized a “voyage down the Nile” with a handful of companions. In reality, the voyage was a mere ruse, and deciding that his work in Egypt was done he took the opportunity to escape back to France. In late August 1799 he boarded a ship with a small retinue of officers and scholars, leaving his 20,000 men behind. Fortunately for him, dead men tell no tales.

Napoleon landed back in France in October 1799. He might have expected an acrimonious response from the Directory (who, if they had been more powerful, would in all likelihood have punished him for desertion). But as it stood Napoleon returned home a hero. To some extent his exploits in Italy still very much carried his reputation. But, as had been the case upon his triumphal procession into Cairo earlier that year, it was more Napoleon’s gift of spin—being able to portray a tragedy as a triumph—that won the day.

The political circumstances surrounding Napoleon’s ascent made power ripe for the taking. The Directory were corrupt and disliked, their incompetency leading to rapid inflation rates which, for those who the revolution was apparently meant to serve, was making life considerably harder than it had been under the rule of the Bourbon monarchs. A string of recent victories against the Second Coalition had done nothing to pacify public opinion and French society, it was felt, was in desperate search for that elusive, intangible concept that all nations strive after: stability. Napoleon believed that he was the one to provide it.

Historical precedent showed Napoleon that he could only provide strong and stable leadership if he was alone at the helm. Just as Augustus had risen from the ashes of the Roman Republic’s most destructive civil wars to usher in a new golden age, so to would Napoleon by establishing himself at the head of French government. To do this, however, he would need support. And so in collusion with his brother Lucien (at this stage the Speaker of the Council of Five Hundred) and a number of directors Napoleon plotted the coup d’état that would overthrow the Directory and establish him in the dictatorial role of First Consul.

The events that followed (known to history as “18 Brumaire”) so closely mirrored a particular episode in Roman history that they almost seem scripted. Augustus’s predecessor Julius Caesar—a figure Napoleon greatly admired—had declared himself dictator in perpetuum (to his ultimate downfall) during the dying days of the Roman Republic. On the Ides of March 44 BC he was struck down in the Senate, stabbed 23 times by senatorial conspirators including Caesar’s nearest and dearest, Brutus. When Napoleon marched into the Council of the Five Hundred with his grenadier guard and demanded they draw up a new constitution, dissolve the Directory, and establish a Consulate, it momentarily looked like he would share the same fate.

But then, at the pivotal moment, his brother Lucien Bonaparte made a dash towards Napoleon, pointing a dagger at his heart, and swearing that if he thought his brother had aspirations of tyranny he would strike the first blow. Whether it was this theatrical display that won the council over or the armed men under Murat’s command who marched in immediately afterwards is debatable. But in the end the council dispersed and Napoleon had won. Far from falling victim to tyrannicide, as his great hero Julius Caesar had done, he instead emanated his office: that of the supreme, autonomously powerful First Consul.