The Day Nazis Invaded the Hamptons in New York 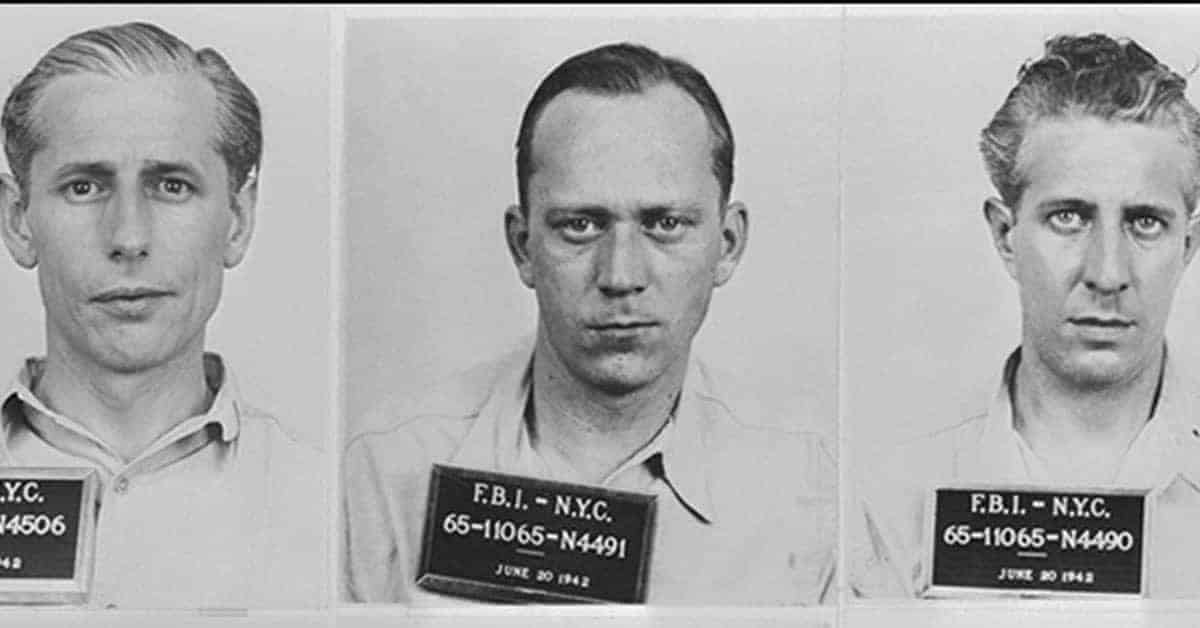 The Day Nazis Invaded the Hamptons in New York

On June 13, 1942, all the attention of the United States was focused on the war overseas. As the war raged on the first foreign invasion on U.S. soil in over 100 years was taking place. It was just after midnight and in the dark waters off of Long Island, a German submarine stopped in a sandbar just 100 yards off the coast. The submarine was helmed by Captain Hans-Heinz Linder and he and his crew were on a very special mission to send one very big message to the United States.

With the submarine hidden in darkness, the crew lowered a large rubber raft into the water. Three men in Nazi uniforms climbed into the raft. A fourth man climbed into the boat with civilian clothes on. He was George Dasch and he knew the Long Island coast well. He had once been a waiter on Long Island’s East End. Now even though he refused to wear the uniform of his companions he was leading them on a mission to attack the place he once called home.

They were on a mission that was the brainstorm of Hitler himself. The German agents had all lived in the U.S. and they had returned home in order to help out their native homeland. They were trained for the mission spending time in Germany’s “sabotage school.” They were trained to create explosives, build timers and even communicate using “secret writing.” But for all their training it was not enough to convince everyone that bring death and destruction to the United States was a good thing. The men were told they were to avoid killing or injuring people, which might have been enough to convince any men that were on the fence.

Their mission was simple. Hide out in New York and use their newly granted skills to sabotage factories that were considered to be essential to the war effort. They were told to make the explosions accidental and to avoid killing or injuring anyone because that would “not benefit Germany.” The only goal was to halt production at these factories. It was poor planning that caused the mission to be doomed from the start as the men ran into problems before they even started.

The first problem they ran into was the depth of the water off the coast of Long Island. The U-boat continually ran aground. It was remarkable that the slow pace and the number of times the U-boat got stuck that it was never discovered by the U.S. Coast Guard. It was not until the men were making their way ashore in the rubber raft that they were finally spotted. U.S. Coast Guard seaman John Cullen was just 21 years old and had no idea what to think of the men in the rubber raft in the middle of the night.

The United States had been involved in World War II for six months. Blackouts had been imposed on the nearby village in the Hamptons and so there were no nearby lights to shine on the dark figures. The dense fog helped to hide them as they came toward the shore but that was not enough to keep them hidden from John Cullen as he walked along the shore. As John Cullen questioned the men they claimed that there were just fishermen who had run aground.

If the sight of the raft and the violation of curfew were not enough to make Cullen question the story, the clothes of the men were also suspect. George Dasch gave his name to Cullen as George John Davis and his fedora, red zipped sweater, and tennis shoes were not the typical look for a Long Island fisherman. Cullen urged the men to return with him to the Coast Guard station. They refused. It was at this point that George Dasch realized they had aroused too much suspicion in the young seaman. So they tried another tactic.

He told Cullen that he didn’t want to have to kill him and proceeded to pull a bunch of cash from a tobacco pouch in his pants. He shoved a wad of cash into Cullen’s hands and told him to forget about what he saw. Cullen knew that he was unarmed and outnumbered and therefore took the money which by some accounts was $260 and by others $300 and left the men. Before he did, he noted that one of the men seemed to be speaking a foreign language.

John Cullen made his way to the guard station slowly at first but breaking into a run once the fog hid him from view. The Guard Station was half a mile away and once he got there he burst through the doors and shouted: “There are Germans on the beach!” The men rushed out of the guard station and looked out the water just in time to see the submarine heading back out to sea. With reinforcements, Cullen returned to where he had seen the men. The explosives remained but the men were gone.

The loss of the explosives was a setback for Dasch and his men but not a big one. While at their sabotage training camp outside of Berlin they had been taught well. They even knew how to make timers out of nothing more than dried peas, lumps of sugar and razor blades. They were also trained for their mission by visiting factories and transportation facilities in order to learn about vulnerabilities and places to target.

There were two cells of Nazi saboteurs that were dispatched from a German submarine base at Lorient, France. The first was dispatched on May 26, 1942, for Long Island and the second left four days later headed for Florida. Both groups were given $175,000 which was supposed to be enough to fund the cell’s operations for two years. They were also given names of Nazi sympathizers written in invisible ink on handkerchiefs. The mission was given the name Operation Pastorius and not even their discovery by the U.S. Coast Guard was enough for them to realize their mission was doomed to fail.

A search by the Coast Guard uncovered a pack of German cigarettes and a path of footprints that led them right to a buried stash of cash and explosives. With definitive proof of a German landing, a manhunt began. But by the time the Coast Guard was on the hunt, the four men were already on the 6:59 am Long Island Rail Road train that was bound for New York City.

Upon arrival in Manhattan, things definitely did not go according to plan. George Dasch took some cash and went on a 36-hour gambling spree in a Midtown bar. He managed to win a meager $250 at pinochle. He then contacted the New York office of the FBI and gave them the code name “Pastorius.” He told them that he had just arrived from Germany and that he would be in contact with their headquarters in just a few days. He then took a train to Washington D.C.

On June 18, he checked into the Mayflower Hotel and called the FBI letting them know where to find him. They immediately took him into custody and the following day the rest of the cell was arrested in New York. With information provided by Dasch and another member of the cell Ernst Burger, two members from the second cell were arrested on June 23. The last two members were arrested a few days later on June 27. Neither cell had managed to commit any sabotage and only spend $612 the fortune they had been given on food, clothes, hotels, and bribes.

A military tribunal was quickly set up to try the eight men for their crimes. Seven U.S. Army officers presided over the trial that was held inside the U.S. Department of Justice. The trial began on July 8, and after several long weeks of trial, all 8 men were found guilty and sentenced to death. However, that was not the end for Dasch and Burger. FBI Director J. Edgar Hoover and D. C. Attorney General Francis Biddle lobbied President Roosevelt to spare the lives of the two men who had provided them with essential information. Roosevelt granted the request and spared their lives. The other six men were executed via electric chair on August 8 less than two months after their arrival in the United States.

As for Dasch and Burger, their luck got even better. After a few years in prison, President Harry Truman took further pity on the men who had betrayed Germany and prevented the two cells from causing any damage or casualties. While the mission was poorly planned from the outset it had the potential to cause great damage. So in April of 1948, both men were granted clemency and deported to West Germany. The men did not receive a warm welcome in Germany because they were seen as traitors who caused the death of their companions.

Smithsonian Magazine – The Inside Story of How a Nazi Plot to Sabotage the U.S. War Effort Was Foiled

The Atlantic – The Keystone Kommandos