This Day In History: President Reagan Sets Out 'The Reagan Doctrine' (1985) 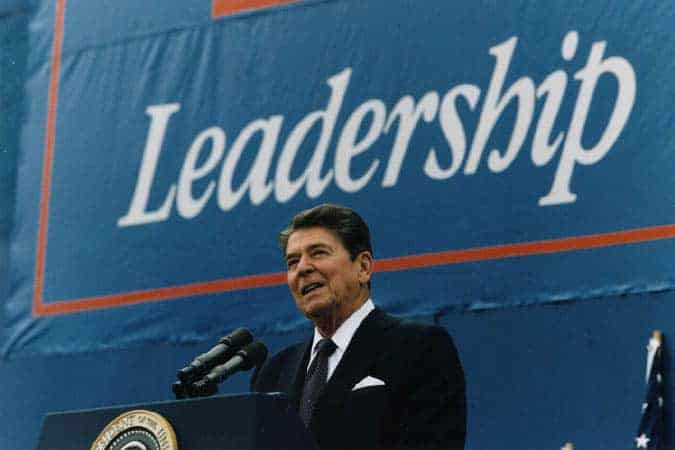 This Day In History: President Reagan Sets Out ‘The Reagan Doctrine’ (1985)

On this day in 1985, President Ronald Reagan outlined his foreign policy goals and stated his commitment to helping all those fighting for freedom around the world. The Soviet leadership in Moscow was still composed of old die-hard communists who were unwilling to reform their country, and who were committed to exporting communism around the world.

Reagan’s new doctrine was an effort to support democratic movements around the world. It was also a challenge to all communist countries that Reagan believed were repressing their populations. Unlike his predecessors, Reagan did not want peaceful co-existence, he believed that America could help countries such as Poland end communist rule.

In his address, Reagan outlined that he believed all God’s children were created equal and that we all were entitled to exercise our freedoms. Reagan believed that America had a mission to bring freedom to the world. He believed that it was essential that the U.S. supported their democratic allies in Europe and elsewhere. The President believed that the United States had a mission to promote democracy around the world and to do all it could to help those who sought their freedom.

Reagan believed that America should support freedom fighters out of self-interest. If they could make the world a more free and democratic place, then there would be fewer threats to the American people.

The President was true to his word. He secured funding and arms for those around the world who sought to free themselves from communist tyranny. Reagan secured military and financial support for ‘freedom fighters’ such as the Contras in Nicaragua, and UNITA in Angola. This was controversial, as these movements had no real popular support. Less controversially he supported the Afghan mujahadeen. Reagan’s support for them, especially in the form of anti-aircraft missiles, helped them to defeat the Soviets, who had occupied Afghanistan since 1980.

Many believe that the Reagan Doctrine was very important and that it helped to change the course of the Cold War. By supporting freedom movements around the world, they argue that the Americans helped to free many people, but also to weaken communism around the globe. Those sympathetic to the Reagan doctrine believe that it helped to bring about the end of communism. For example, the defeat of the Soviets in Afghanistan and their withdrawal in 1989 from that country set off a chain of events that resulted in the collapse of the Soviet Union.

Not everyone agrees with this argument. Many critics believe that the Reagan Doctrine prolonged many conflicts around the world. It also gave support to bloody tyrants and to groups who used deadly tactics against civilians.