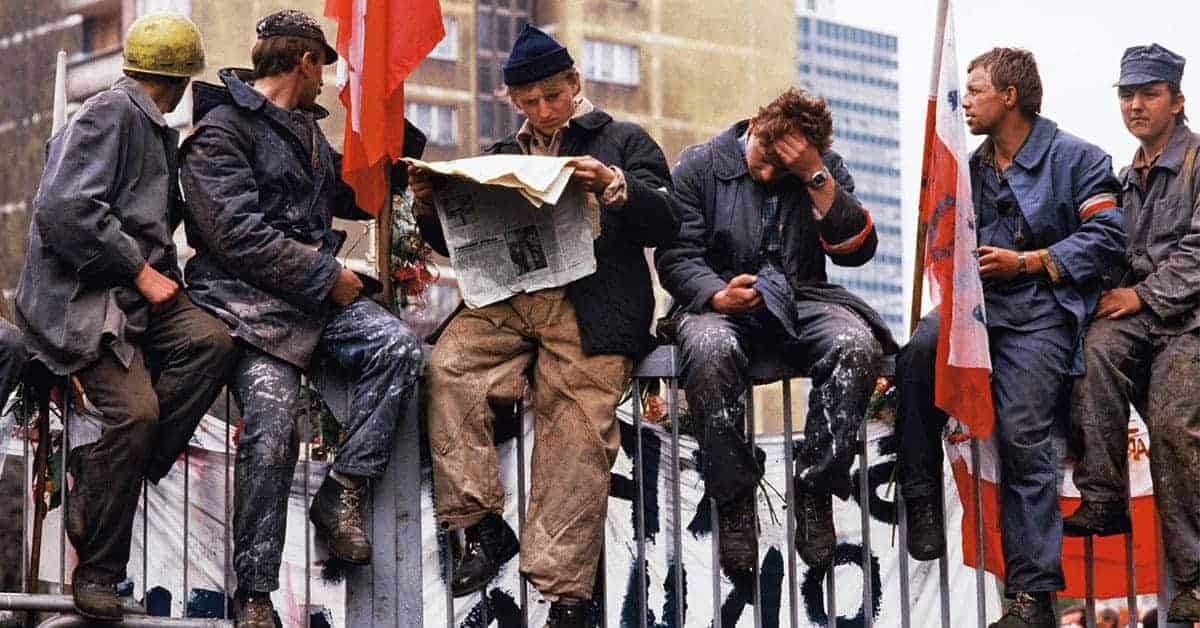 Communism in Poland traces its roots back to the late 19th century when the Marxist First Proletariat Party was founded in 1882. Between the First and Second World Wars, in the Second Polish Republic, communists formed the Communist Party of Poland KPP but most of the leaders and activists were killed in Stalin’s Great Purge in the 1930s and the Party was abolished by Communist International, an international organization that advocated a global communist system.

In 1942, the Polish Workers’ Party (PRR) was established in Nazi-occupied Poland. At the same time, in Moscow, the Union of Polish Patriots was installed with Stalin’s support as a rival communist center. After the Nazis were defeated, the Polish People’s Republic was formed and the PRR and Polish United Worker’s Party (PZPR) were joined.

Under communism, the Polish economy deteriorated. On June 28, 1956, the first major anti-communist protests began in Poznan, a western city close to the German border. 57 protesters were killed and almost 800 arrested, almost all of whom were workers.

As communism became less popular, the government became more and more oppressive, with many anti-religion policies. The State machine was spending too much on heavy industry, armaments and prestige projects, and not enough time on consumer production. In March 1968, a second wave of protests sprang up, starting in Warsaw after the regime banned a play by the famous Polish writer Adam Mickiewicz. The intelligentsia was targeted and removed from their positions in academia and government.

Because the Soviets invested too much money in military strength, the food prices needed to be artificially low to kept urban discontent under control. On December 12, 1970, the regime suddenly announced a massive 60% increase in the prices of basic foods. Food Ration Cards were introduced because of the destabilized market in August 1976 and remained a part of life in Poland for the duration of the People’s Republic. Poland’s crisis deteriorated and in 1970, 1971, 1976, a third, fourth, and fifth wave of protests broke out.

In the 1980s the Solidarity Movement, an anti-communist, pro-labor union formed. This led to the fall of communism in Poland. On December 13, 1981, with the country on the verge of economic and civil breakdown, Martial law was declared. Several thousand Solidarity union supporters were imprisoned. The Military Council of National Salvation banned Solidarity on October 8. Martial law was formally lifted in July 1983, although oppressive policies and food rationing remained through the late 1980s.

In 1989, the National Assembly Presidential Election was held. The communist party just barely won, despite their representative being the only name officially on the ballot. Solidarity elected representative Tadeusz Mazowiecki was appointed prime minister and confirmed on August 24, 1989. In December 1989, socialism and Marxism were officially removed from the Polish Constitution. Lech Wałęsa, President of the Solidarity union demanded early presidential elections. In 1990, Wałęsa won the presidential elections.

Encyclopedia Britannica – Dictatorship Of The Proletariat

Poland Culture – What Poles Ate When There Was Nothing to Eat

Poland History – Communist Food Rationing Turned into a Board Game

Holocaust Research Project – “How The Germans Are Starving Poland”

DW – Poland Blazed The Trail For The Fall Of Communism

History Collection – This Day In History: Lech Walesa Is Released By The Communists (1983)

The New York Times – END OF THE SOVIET UNION; The Soviet State, Born Of A Dream, Dies

Encyclopedia Britannica – Why Did the Soviet Union Collapse?