This Day In History: The Cuban Missile Crisis Began (1962) 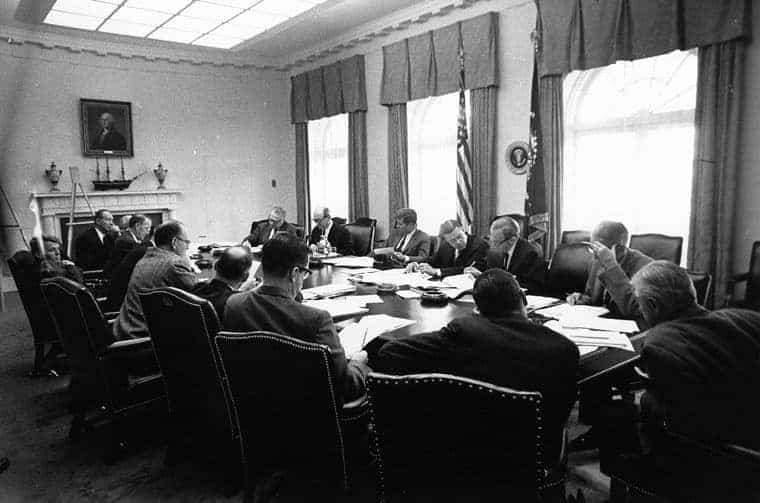 This Day In History: The Cuban Missile Crisis Began (1962)

The Cuban Missile Crisis begins on October the 14th, 1962, which was perhaps the biggest crisis in the Cold War and it brought the world to the brink of a nuclear war. The crisis started when a U-2 spy plane gathered photographic evidence that showed that the Soviets had placed medium-range missiles on Cuban soil. The weapons were identified as SS-4 and R-14 medium missiles and were presumably targeting American cities. The fact that the Soviets had missiles with a nuclear capability could have given them a strategic advantage in any nuclear conflict.

There had been growing tensions between the West and the East ever since the Cuban Revolution. The pro-American government had been overthrown by the revolutionary forces led by Castro and Che Guevara, who were sympathetic to communism. When the Americans tried to overthrow the Castro regime at the Bay of Pigs, by landing anti-Communists forces, it failed.

Castro believed that the Americans would try again and next time they would land in force and march on Havana and re-impose the hated old regime. He turned to Moscow for help and they agreed to send arms and advisors. American intelligence sources came to believe the Soviets were also moving missiles capable of delivering nuclear warheads. The Soviet leader at the time Khrushchev was coming under pressure at the time for hardliners in Politburo. He seemed to have decided to show his internal opponents that he was determined to be tough with the Americas by placing missiles on Cuban soil.

The pictures taken by the U-2 plane were analyzed and then passed to the President’s Office. When he saw the evidence he had no choice but to act and he immediately took measures to ensure that the missiles were taken off Cuba, which was only 90 miles away from Florida. One of his first measures was that he ordered that all Soviet ships that were about to enter Cuban waters would be searched for missiles or related equipment. Kennedy also demanded that the missiles already in Cuba be withdrawn.

This provoked outrage in Moscow and it warned the US against taking any actions against its ships. The Soviets also sent several submarines to the West Indies and some of them had nuclear missiles. The Americans responded by placing their armed forces on high alert and they also made preparations for a nuclear conflict. The American public was in a state of panic when President Kennedy announced that missiles were stationed in Cuba and they began to stockpile on food and other supplies.

In the coming weeks, the world would be on the verge of a nuclear conflict between East and West. It was perhaps the most dangerous period in the history of humanity because a nuclear war could have resulted at the end of human civilization.