This Day In History: 'Bloody Sunday' Shootings In Northern Ireland (1972) 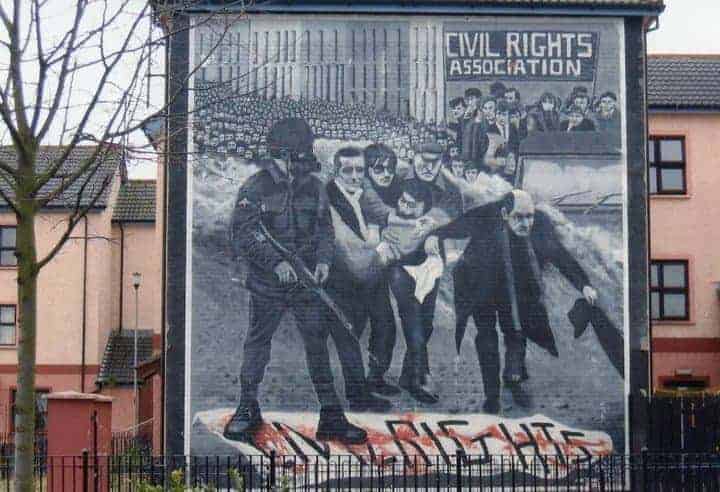 This Day In History: ‘Bloody Sunday’ Shootings In Northern Ireland (1972)

On this date in 1972, 14 people were shot dead by British paratroopers in Northern Ireland. The shootings occurred at a massive march in the city of Derry or (Londonderry) on this day. It was organized by the Northern Ireland Civil Rights Association and the marchers were protesting against the British government’s use of internment without trial. During the march, some stones and bottles were thrown by protestors at British soldiers and local police. The security forces, then claimed that they were shot at and in response they opened fire.

The British paratroopers shot 26 people and killed thirteen. A fourteenth died some months later. Investigations later showed that several people had been shot in the back as they were trying to run away from the scene. Many people claimed that the British soldiers had opened fire on peaceful protestors and that they had murdered them in cold bold. The British government claimed that the troops had only acted in self-defense.

Bloody Sunday was a turning point in the Northern Irish Troubles. Many Catholics angered by the killings began to support the IRA. In the aftermath of Bloody Sunday, violence increased and bombings and shootings became part and parcel of everyday life. The British government set up a commission to investigate the killings on Bloody Sunday and this found that the soldiers had opened fire after being fired on. This caused outrage in many circles and the commission of inquiry was denounced as a ‘whitewash’. A second inquiry was established in 1998 and after 12 years of deliberations, it found that the killings on Bloody Sunday were unjustified and illegal.

The Troubles in Northern Ireland continued until 1998. They were ended by the Good Friday Agreement and this established a power-sharing arrangement between Catholics and Protestants in the province. This arrangement has generally brought peace to the province but occasionally extremists carry out bombings and shootings.

History Collection – 40 Photographs of The Troubles, The Northern Ireland Conflict

The Irish Times – Bloody Sunday Decision Time: ‘The People Who Were Killed Have Nothing’