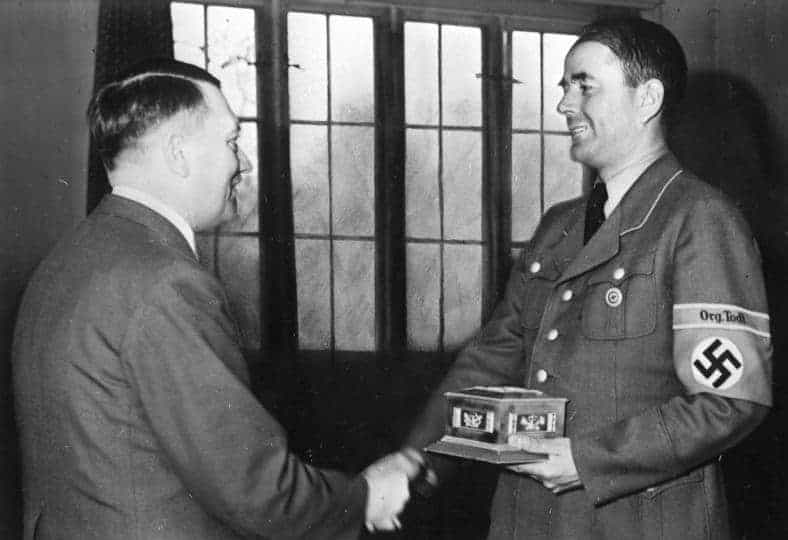 On this day in 1941, Albert Speer, the minister for war production asks Hitler for some 30,000 Soviet POWs to work as laborers on Berlin building projects. The prisoners were to be used as slave laborers on a massive building program. This was contrary to the Geneva Convention that regulated and protected the rights of POWs during the war.

Speer was a very influential figure in Nazi Germany and was particularly close to Hitler and was his personal architect. He was born in Mannheim in 1905, he was a qualified architect and became a Nazi in the late 1930s. He became a convinced Nazi after attending a meeting, where Hitler spoke. Hitler was also impressed by the young Speer. He was soon Hitler’s personal architect. He was commissioned by Hitler to design the parade grounds Nuremberg Party Congress in 1934, which Leni Riefenstahl made famous in her famous controversial film Triumph of the Will. Speer also helped to organize some of Hitler’s mass-rallies.

Hitler made Speer Minister for Armaments, despite him having little experience. However, he proved to be a brilliant choice and he was able to keep the Nazi War Machine going despite constant air attacks and a shortage of resources and raw materials. In order to keep the Nazi War Machine going, Speer urged Hitler to supply him with slave labor. The Nazis had millions of Soviet prisoners. The slave laborers were soon set to work in terrible conditions on numerous projects. Speer would later use many slave laborers in the German armaments industry and countless died of ill-treatment, hunger, and neglect. By 1945 there were hundreds of thousands of slave laborers in the Third Reich and they were drawn from every country occupied by the Nazis. Their treatment was later regarded as a war crime by the allies after the war.

Hitler wanted to build a new ‘Berlin’ one that reflected Nazi power and ambitions. Speer along with being the Minister for Armaments was also the architect responsible for building a new German capital.

Speer wanted to begin construction even as the war waged and the RAF regularly bombed the German capital. Despite the limited resources Hitler agreed. Soon the rebuilding projects were called off- because of the demands of the war.

Speer was tried after the war for his role in the Nazi government and was sentenced to a term of imprisonment, at the Nuremberg Trials. He was given a 20-year sentence in Spandau Prions. He later wrote an autobiography where he tried to minimize his role in the Nazi reign of terror. He managed to fool many people. Nowadays he is widely seen as at least partly responsible for the deaths of thousands of slave laborers.