The Dark Prints: The Baffling Mystery of the Devil’s Footprints 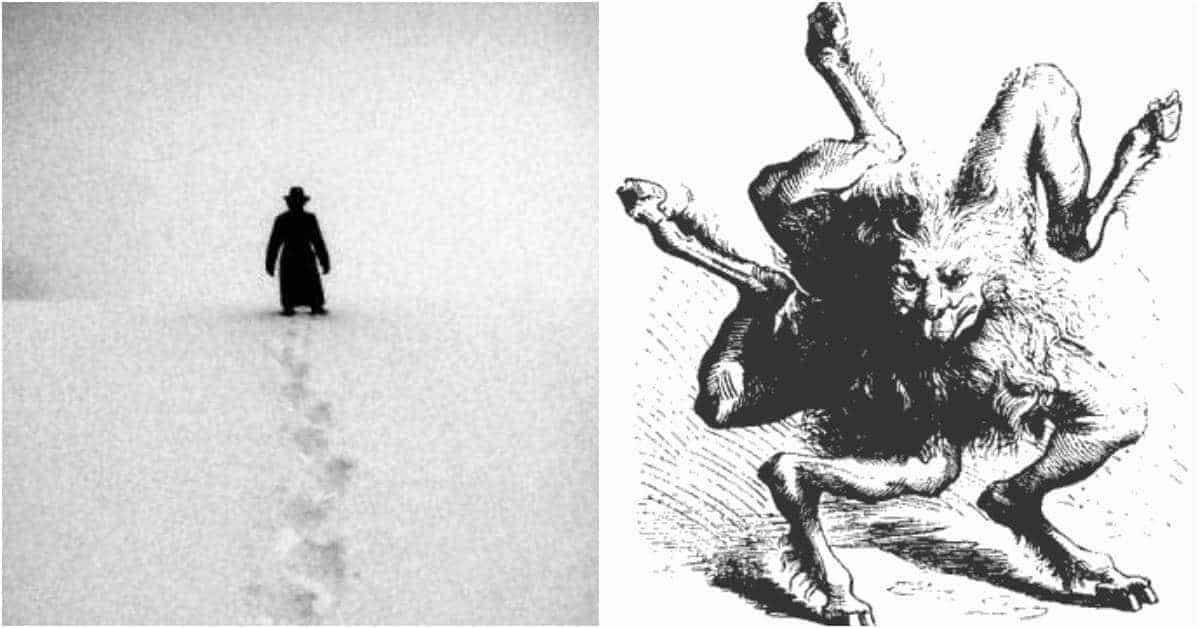 The Dark Prints: The Baffling Mystery of the Devil’s Footprints

Few, if any, of Devon’s population believed they had been visited by God, however. Far from considering themselves blessed, they organized an immediate, and quintessentially Victorian, local response to this baffling phenomenon: arming militias to track down and kill whatever might be the source. In the coastal town of Dawlish, tradesmen took up “guns and bludgeons” and set off across the moors in pursuit of this unimaginable beast. But though their tracks were clear as day, their pursuit was ultimately in vain.

By the time the first official reports were released on February 13, locals were already ascribing these footmarks to the Devil (I say footmarks because in 1855 “footprints” had not yet entered the English language). The belief that Satan had been among them drove townspeople across the county into a desperate, if not rather localised, panic. They implemented a self-imposed curfew, refusing to venture outdoors after nightfall.

The story’s dissemination in the London Illustrated News quickly captured the attention (and imagination) of readers throughout the country. It even attracted an editorial suggestion from a reader in the German university town of Heidelberg the following month. The contributor wrote that exactly the same prints often appeared on the hill of Piaskowa Göra (in modern-day Poland, near the Czech border). Nor would they appear only in winter; they occasionally manifested themselves in the soft sand that dusted the hill during the warmer months.

Theories put forward at the time ranged from the rational to the ridiculous, with the occasional bizarre one thrown in for good measure. At the bottom end of the scale were suggestions they were made by the “poor, despised, and insignificant rat”, or the hind foot of a hopping badger. At the upper end are theories that the footprints were the work of a Great Bustard, a (presumably hoof-shaped?) hopping frog, a geographically challenged Kangaroo (or “colonial hopping dog” as they were actually not known at the time [fake news]) that had escaped a local zoo, or an errant, mischievous otter.

Others suggested that they might have been left by a badger or a bird. But it’s hard to imagine that a badger could travel that far in a single night, especially if it was expending so much energy hopping. A bird would struggle less. But as journalist in the London Illustrated Times was quick to point out: a) birds didn’t have hooves and b) birds were extremely unlikely to confine their directional path to a single line. If not a wild animal, some proposed that it could have been an escapee from the travelling menagerie. But again, no evidence was forthcoming.

One person even wrote in to suggest the marks had been left by a Unipede; an astonishingly rare mammal, the last recorded sighting of which had been made in Labrador by the Icelandic explorer Biom Herjolfsson in 1001 AD. Disappointingly, nobody posited a one-legged hopping donkey—both the most logical explanation as a combination of the mystery’s most likely elements, and— by power of its imagery—by far the most entertaining. Then again, these were the days when you had to actually write into a newspaper to have your say rather than just fire off barely constructed insanity from the comfort of your laptop, so the editors were hardly inundated.