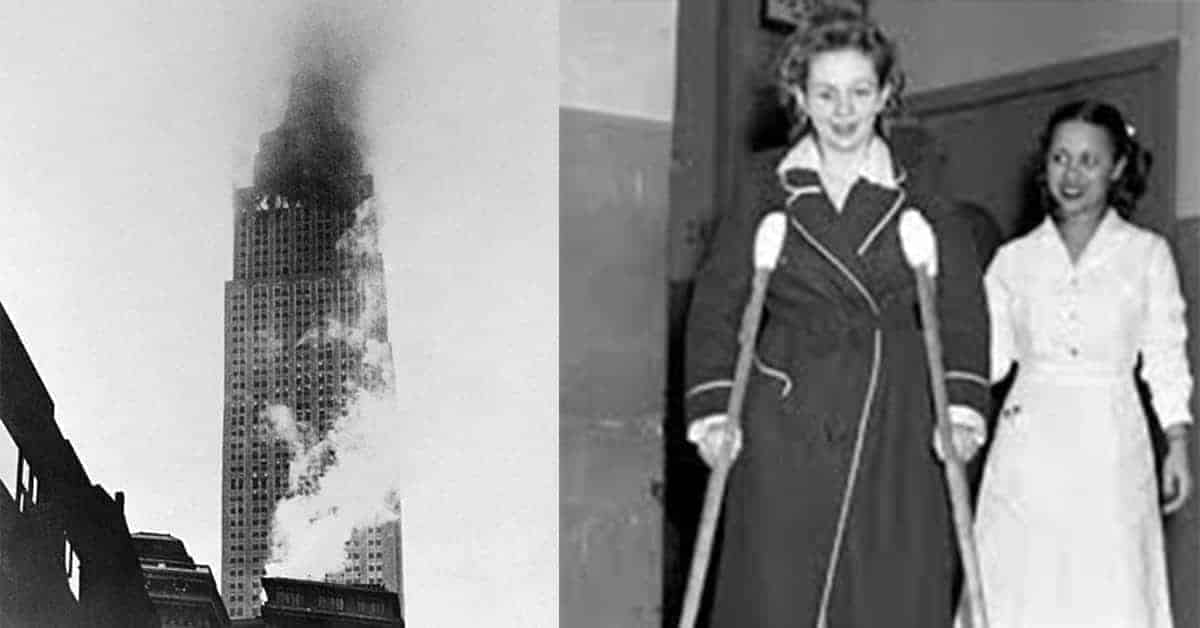 If you ever think you’ve had a bad day at work, spare a thought for poor Betty Lou Oliver was almost killed twice in quick succession. First, a plane crashed into the Empire State Building where she worked and then, the elevator she was on plunged 75 stories and for a moment, Betty must have thought she was falling into eternal darkness. Instead, she survived both incidents, with severe injuries, and lived another 54 years.

On July 28, 1945, Betty arrived at the Empire State Building where she worked as an elevator attendant. It was all set up to be just another ordinary day at work for the 20-year old. Little did she realize that the foggy conditions outside would turn her world upside down. It was in the final months of World War II, and a B-25 service bomber was embarking on a basic mission which involved bringing servicemen from Massachusetts to LaGuardia Airport in New York City.

The pilot was the vastly experienced Captain William Smith who had led some of the war’s most dangerous missions. By the time Smith had arrived in New York, the fog had significantly reduced visibility. Smith contacted LaGuardia and requested permission to land. He was advised not to land and according to the writer of The Sky Is Falling (a book about the events of that fateful day), Arthur Weingarten, Smith ignored the order and made a turn that brought him over midtown Manhattan.

It appears as if Smith became disorientated by the fog and rather than turning left after the Chrysler Building like he should have, Smith, turned right and was now directly among the city’s skyscrapers. At the time, the Empire State Building was the tallest in the world, and Smith crashed between the 78th and 80th floors. Smith, the two crew members on board, and 11 people in the building died. Search crews did not find Smith’s body for two days as it went through an elevator shaft and was at the bottom.

Inside, there was chaos as shocked employees tried to flee as soon as possible. According to Therese Fortier Willig, who worked on the 79th floor, she could see nothing but flames. She described the horrific spectacle of seeing a man named Mr. Fountain catch fire. The impact of the crash was felt throughout the building. On the 56th floor, Gloria Pall said it felt as if the building was about to topple over. Despite being over 20 floors from the impact, it was strong enough to throw her across the room.

When the plane crashed, parts of the engine flew into the building and weakened the cables of a pair of elevators on the 79th floor. This action ensured that Betty had a day she would never forget as she cheated death twice in the space of minutes.

At the moment that Captain Smith crashed the plane into the Empire State Building, Betty Lou Oliver was working on the 80th floor as an elevator attendant. The crash caused her to be thrown out of her vehicle, and as well as suffering from severe burns, Betty had a broken pelvis, back, and neck. They were terrible injuries, but it was clear that Betty would survive as first aid workers helped her and placed her on an elevator to the ground floor. Soon, she would be driven to the hospital for proper treatment.

Meanwhile, Willig was still in shock over what happened on the 79th floor. In the immediate aftermath of the crash, she was certain it was all over for everyone on the floor. Speaking years later, Willig described it as a â€˜small universe’ as it was akin to being stuck on a small island surrounded by fire. While someone had managed to open a window and Willig used a handkerchief to protect her from the smoke, several women passed out from the fumes.

At some point, a man named Paul Dearing jumped as he panicked in the aftermath of the fire. Willig was so sure that her time on Earth was over that she took the rings off her fingers and threw them out of the window. Fortunately, her fears were groundless because firemen arrived on the scene and rescued all the survivors. Pall later admitted that she had no idea what happened 23 floors up until she was out of the building and saw the tail of a B-25 bomber sticking out of the building. It appeared as if the worst was over and it was; except for Betty Lou Oliver.

In a few seconds, she would be dead at just 20 years of age; with no opportunity to achieve any of her goals in life nor would she see her husband again. Remarkably, Betty survived her second ordeal of the day with an extraordinary amount of luck by all accounts. The elevator plunged a total of 75 stories, approximately 1,000 feet, so in reality, Betty shouldn’t have survived.

As it transpired, the thousand feet of elevator cable had broken away and fallen to the bottom of the shaft before Betty landed. By the time she landed, the cable was there to provide a softer landing surface. The rapid compression of air also added to the cushion. Although there are more fun ways to end up in the Guinness Book of Records, Betty’s name was added for the unlikely feat of longest survived elevator fall; a record she still holds today. It was an incredible escape but what became of Betty Lou Oliver?