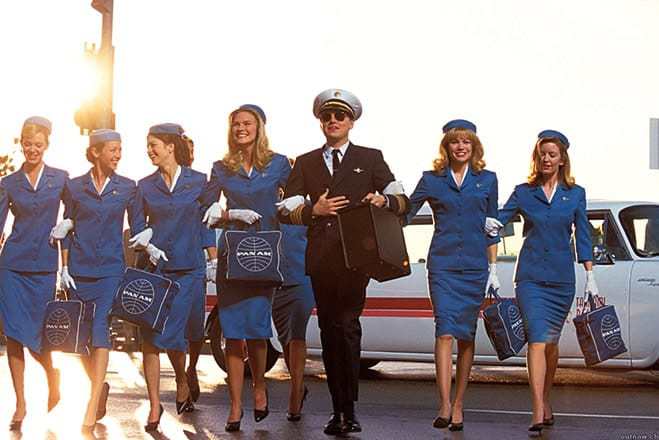 Abagnale rang Pan American World Airways and claimed he was a pilot who lost his uniform when it was getting cleaned at a hotel. He used a fake employee ID to complete the con and forged a Federal Aviation Administration pilot’s license. While the movie made it appear as if it was a simple process, it was anything but. Abagnale had to collect his uniform at the airport and was terrified that other staff would discover he was a teenager. He posed as a businessman to get a security badge and pretended to be a pilot named Frank Williams to acquire his FAA license.

According to Pan Am, Abagnale flew on over 250 flights as a fake pilot; clocking over 1 million miles and visiting 26 countries. He benefited from the process of ‘deadheading,’ whereby a company employee (in this case Pan Am) could catch a free flight by simply showing their ID. Abagnale managed to get a group of college students to work as stewardesses as a means of eliminating suspicions; the women were the misdirection he needed to complete his cons.

Although he was flying as a passenger, pilots occasionally offered him the controls as a courtesy in-flight. On one such occasion, Abagnale accepted the offer but promptly put the plane on autopilot because, in his words, he ‘couldn’t fly a kite.’

Capture & Life on the Straight and Narrow

Abagnale worked as a physician under the alias Frank William for 11 months in a Georgia hospital after narrowly evading capture as a pilot. He even worked the night shift as a practicing pediatrician, but fortunately, no emergencies occurred during his watch.

While the movie suggests he passed the Louisiana bar exam to become a lawyer with just two weeks of study, it actually took three attempts and seven months of study. Abagnale pretended to be a graduate from Harvard and worked as a ‘gopher’ boy for several months before leaving when he discovered a colleague was performing a background check on him.

Eventually, he moved to Montpellier, France and tried to ‘go straight.’ Unfortunately for him, a stewardess (and ex-girlfriend) recognized his face on a wanted poster and alerted the authorities. Abagnale served time in France, Sweden, and the United States and performed two daring escapes during this period. The first came while he was being deported to the United States, but he was apprehended by a Royal Canadian Mounted Police constable. On this occasion, Abagnale claimed to have escaped from the VC10 jetliner he was on via the bathroom as the plane landed. However, employees of the Aerospace Industries Association said it is impossible because the hatch is sealed shut.

During a stint in a Federal Detention Center in Georgia, Abagnale pretended to be an undercover prison inspector. As a result, he received better food and treatment than everyone else. Eventually, he approached the guards, ‘confirmed’ that he was an undercover agent, and requested a phone call to speak to an FBI agent. His girlfriend at the time posed as the agent on the phone and arranged a meeting. They drove away together in a childishly simple escape which was supposedly covered up by the authorities.

He even evaded capture one more time by posing as an FBI agent, but he was eventually arrested and sent to prison. Abagnale was released early when he agreed to a U.S. Government request to teach them about ways to prevent other con artists from successfully committing fraud. After being hired and fired from several jobs once his criminal past was revealed, he set up Abagnale & Associates in Oklahoma. The organization advises companies on fraud, and some 14,000 businesses have adopted his anti-fraud measures. To this day, Abagnale works with the FBI and teaches at their Academy.

WHYY – Could This Famous Con Man Be Lying About His Story?

Screenrant – Catch Me If You Can: 5 Things Based on The True Story & 5 Creative Liberties Taken)

Mental Floss – 12 Fast Facts About Catch Me If You Can

Esquire Magazine – Was the Story of Catch Me If You Can Frank Abagnale Jr.’s Greatest Con?

Business Insider – The Greatest Cons Ever Pulled Off by Frank Abagnale Jr.

US News – How Frank Abagnale Would Swindle You

LA Times – The Truth? Just Try to Catch It If You Can