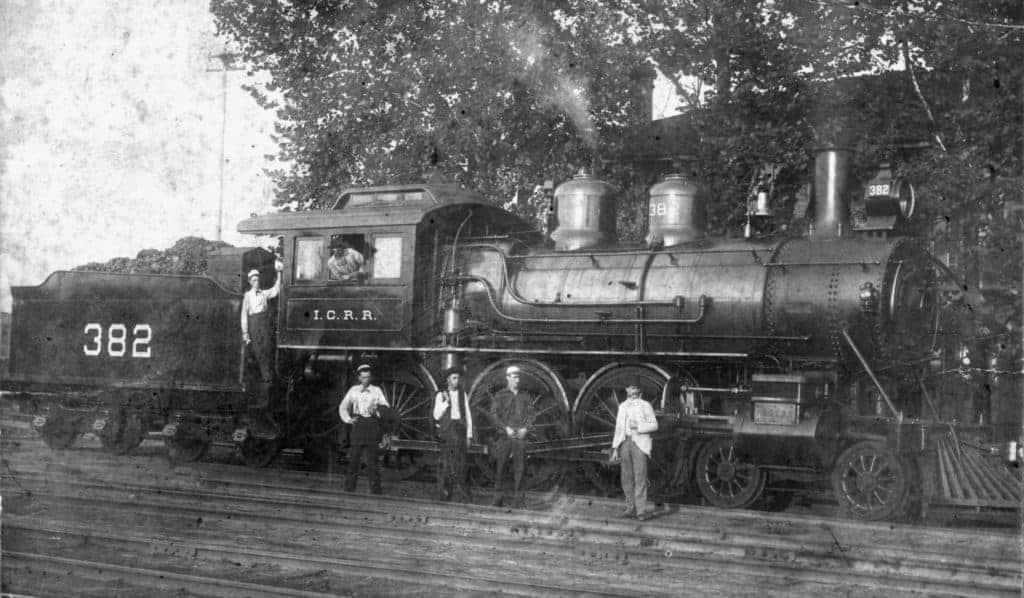 Trains are fascinating. Since their inception during the early 19th century, people have marveled at the technology that makes them go. As they expanded, they forced the creation of standard time so that their trains could be on time. Even today, they remain the largest over-land transporter of goods, loading freight cars with intermodal containers from ships, transporting grain, automobiles, oil, hazardous chemicals, and even garbage. Before widespread use of the automobile, passenger trains carried people from New York City to San Francisco within a matter of days.

When trains wrecked, they were a site to see. The mangled steel and wood from the train cars intertwined with the track and became national and international news stories. On April 30, 1900, there was one particular train wreck that remains a subject of folk tales, songs, and stories of bravery. On a stretch of track owned by the Illinois Central Railroad an engineer was attempting to make up for his train’s delayed start leaving the station. A half mile outside of the Vaughan, Mississippi Depot a legend was born when his train crashed. This is the story of Casey Jones.

Jonathan Luther Jones was born in the boot-heel of Missouri on March 14, 1863. As a small child, his family moved to Cayce, Kentucky. When Jones was working for the Mobile & Ohio Railroad in Jackson, Tennessee, he was asked by a fellow boarding house patron where he was from. Jones responded that he was from Cayce. From that moment on he was known as Casey Jones.

Casey Jones was a quick learner and was promoted from laborer to brakeman on the M&O’s Columbus, Kentucky to Jackson, Tennessee route. Soon, Jones was promoted to fireman and worked on the Jackson, Tennessee to Mobile, Alabama route. While Jones was staying at the bordering house in Jackson, he fell in love with the owner’s daughter. Mary Joanna Brady convinced Jones to become a Catholic. He agreed and was baptized in November 1886 and the couple married two weeks later on November 25th.

Casey Jones embraced his role as a husband. With his earnings from the M&O, he and his wife, Janie as she was known, bought a house in Jackson, Tennessee and soon the couple had started a family, eventually having three children. Casey Jones was known as a family man and a teetotaler. Unlike other men on that worked for the railroad, Jones returned to his wife and family each night instead of drinking at the local saloon.

During the summer of 1887 a yellow fever epidemic struck the railroad. Yellow Fever was common during the hot and humid summers in the Mississippi River valley. Individuals who worked for the railroad unwittingly carried the mosquito-born illness with them contributing to its spread. Railroad workers who contracted the disease became very ill and even died. During their convalescence, they could not work. The epidemic opened the door for quick promotions within the railroad hierarchy. On March 1, 1888, Casey Jones went to work for the Illinois Central Railroad as a freight engineer running trains between Jackson, Tennessee and Water Valley, Mississippi.

Jones had a goal to be an engineer for passenger trains. In the hierarchy that is the railroad world, this would take some time. To get himself promoted as quick as he could, Jones ensured that his trains were on time. His motto was to get the train “on the advertised.” As he traveled on his run, he manipulated the train’s whistle in such a manner that he had created his own calling card. People along his route proclaimed that could not only set their watches by Jones but that they could hear his “sort of whippoorwill call” and state, “There goes Casey Jones.”

In the spring of 1883, the Illinois Central Railroad was tasked with shuttling people to the Chicago World’s Fair. The railroad asked Casey if he would like to be an engineer for one of the passenger trains that would take people from the center of Chicago out to the exposition at Jackson Park. Jones jumped at the chance and spent a fun summer in Chicago with his wife shuttling fairgoers and seeing the latest technology on display for railroad engines. When the Illinois Central Railroad needed someone to drive its modern engine no. 638 to Mississippi, Jones applied and was granted the job. Casey Jones drove the engine on its first run 589 miles (948 km) from Chicago to Water Valley, Mississippi.

Engineers, firemen, and brakemen did more than simply drive the train. They were also responsible for ensuring that the entire train was in good working order. A friend of Jones, Fred J. Lee, wrote about a story that Casey told him. In 1895, Jones turned over the engineering duties to another engineer so that he could go out onto the engine and oil the relief valves. With the train’s speed reduced, Jones went out onto the running boards.

As he turned to return to the cab, he noticed several children playing on the track. When the children noticed the approaching all but one fled. A girl was frozen with fear on the the track. Casey Jones climbed down onto the cowcatcher and scooped up the girl, returning her safely to the ground when the train stopped. This incident alone was enough to immortalize Casey Jones. But it would be on another trip that the engineer would be remembered as a hero.

Casey Jones was a stickler for making sure his trains were on time. This habit of being on time made Jones, at times, take chances. As a result, he had been suspended over his career for a told of 145 days due to nine citations issued by the Illinois Central Railroad. On April 29, 1900, Jones and his fireman Sim Webb were assigned to run train No. 1, replacing an engineer that had called off. Jones and Webb, who worked as a team, took the route. Their train arrived late forcing the team to leave the Poplar Street Station 75 minutes behind schedule.

Train No. 1 was pulled by engine 382. The train had six cars filled with passengers who were traveling on the Illinois Central’s main line between Chicago and New Orleans. Casey Jones was responsible for the roughly 200 mile journey from Memphis to Canton, Mississippi. Jones believed that with a modern engine and a relatively light load, it would be possible to make up time and arrive in Canton close to on time. Jones pulled the train out of the Memphis station at 12:50 am on April 30, 1900.

For almost 155 miles, Casey Jones managed to drive the train over “light and shaky rails” and “speed-restricted curves” at close to 80 miles per hour (128 kmh). Roughly every 50 miles or so, the train stopped for a 15 minute water break. As Train No. 1 pulled into the Durant, Mississippi depot Jones was informed that a passenger train would be sitting on a siding outside of Vaughan, and his train would have the right of way. This meant it was very likely that Casey Jones would be able to continue making up time on his route.

Train No. 1 continued traveling at a high rate of speed. When the train pulled out of Goodman, Mississippi it was only 25 miles away from Canton and merely 5 minutes behind schedule. Jones had a good feeling that he would be successful in making up every minute of the 75 minute delay he inherited and that his train would enter the station at 4:05 am as “advertised.” Feeling confident, Casey Jones directed Train No. 1 in a left-hand curve at about 75 miles per hour (121 km/h). Suddenly, Sim Webb yelled to Casey Jones, “Oh my Lord, there’s something on the main line!”

Without hesitation, Casey Jones yelled back to Webb, “Jump Sim, jump!” Sim jumped off of the fast-moving train and could only watch what happened next. According to eyewitness accounts, Casey Jones pulled the train whistle to warn all people around the stalled freight cars to get out of the way. He pulled back on the throttle and threw on the emergency breaks in an attempt to slow the train down. Engine 382 had slowed down significantly, but not enough to avoid hitting first a wooden caboose, then cars full of hay, corn, and timber before leaving the tracks and hitting an embankment.

Headlines in the Jackson, Mississippi newspaper proclaimed that Casey Jones was found under the cab with his skull crushed and his “right arm torn from its socket.” The freight train crews removed a lifeless and broken Jones and carried him on a stretcher a half mile to the station in Vaughan. Casey Jones’s watch stopped at the time of impact which was 3:52 am. He was the only casualty and has been credited with saving the lives of all passengers and train workers because he remained on the train and slowed it down.

Almost immediately Casey Jones became a legend as he sacrificed his own life for his fellow train workers and passengers. One headline proclaimed that “Heroic Engineer Sticks to his Post at Cost of Life.” Some passengers recalled the incident as nothing more than being “jarred a little.” In the aftermath of the wreck, Wallace Saunders, an African American songwriter, wrote “The Ballad of Casey Jones.” The song became very popular and made Casey Jones a folk hero.

Casey Jones’s body was sent back to Jackson, Tennessee. A funeral mass was held on May 1, 1900 at St. Mary’s Church where, 14 years earlier, Casey had married Janie Brady. He is buried in Mount Calvary Cemetery. Today his home is part of a railroad museum and family entertainment complex that includes a railroad museum with artifacts about Jones and that fateful night.

The Ballad of Casey Jones by Wallace Saunders. AAREG.