The Bizarre Origins of the British Special Air Service (SAS) 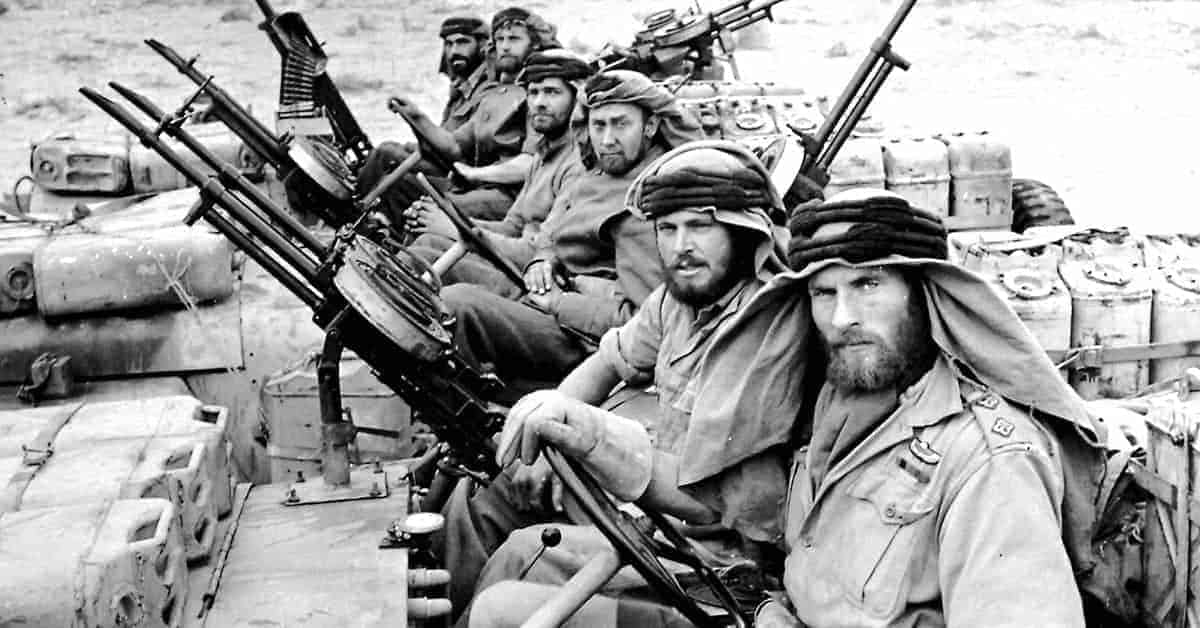 The Bizarre Origins of the British Special Air Service (SAS)

Special forces form a vital component of contemporary militaries, and there is an ongoing, and likely never-ending, debate arguing which unit is the world’s absolute elite. Few, however, argue against the British Special Air Service’s (SAS) status as a leading contender, or the unit’s influence in shaping the evolution of special forces throughout the twentieth century. Dating back to the Second World War, the SAS boasts an envious list of battle-honors, yet the unit was relatively unknown outside of the special forces community. The unit’s obscurity disappeared when a SAS assault team’s rescue operation was broadcast live on April 30, 1980, during the Iranian Embassy Siege. This event, combined with the SAS’s inherently secretive nature, stoked the flames of popular curiosity, and the unit’s fame spread over the following decades.

Deeply respected throughout the world’s militaries, the SAS’s storied career began in 1941 when a young Lieutenant in the British Army decided breaking into the Commander-in-Chief of the Middle East theatre’s office was the best way to get approval for building a new type of commando team.

Special forces are not a new military concept. Throughout history, numerous armies created elite, specialized, units to sabotage the enemy, stage hit-and-run attacks, perform reconnaissance missions, or execute rapid, long-distance, maneuvers. Ancient Egypt, China, Greece, and Rome, for example, all used select groups to perform either dedicated tasks or commando-style raids. Alexander the Great’s Companion Cavalry, Rome’s Extraordinarii, and Egypt’s Medjay, among others, all share in fathering the role of contemporary special forces. Warfare’s evolved since Caesar’s day, of course, and the rapid transformation and professionalization of militaries throughout the previous three centuries only emphasized the need for specialized units.

The British Army, in particular, seized the specialized unit concept to police their varied, world-spanning empire. In 1846, they formed the oddly comprised Corps of Guides. Part infantry and part cavalry, the unit was ridiculously fast and maneuverable and earned a formidable reputation fighting throughout India and Pakistan. Speed and independent action was a key element of the Guides’ success, and the idea took root. Detached, specialized, forces performed reconnaissance throughout the Tirah Campaign (1897-1898) and the Second Boer War (1899-1902).

World War II, however, spurred the development of special forces more than any other conflict. On June 10th, 1940, the Allies’ strategic situation was in complete disarray. Great Britain no longer had an army on the continent, and France could not stop the Reich’s overwhelming assault. This, of course, did not sit well with Winston Churchill, the fiery British Prime Minister. Retaking France would not happen soon, but allowing the Germans told to hold it without a fight just wasn’t his style. Churchill ordered his joint chiefs of staff to raise a force, “prepared with specially trained troops of the hunter class who can develop a reign of terror down the enemy coast.”

Comprised of individualized commando units, the “Special Service Brigade” expanded rapidly when volunteers flocked to join their ranks. This included a tall, gawky, officer with a less than promising reputation. An athletic man, Lieutenant David Stirling envisioned himself an adventurer, and he’d trained to climb Mt. Everest prior to World War II’s outbreak. His military career, however, included raising laziness to a form of high art, and little else. Nicknamed the “Giant Sloth,” Stirling wasn’t a model officer in 1940, but the new commando units fascinated him, and fanned the young man’s dreams of glory.

Stirling’s unit, No. 8 Commando, fought at the Battle of Crete and the Battle of the Litani River in 1941, but their heavy casualties resulted in disbandment. Stirling believed the losses stemmed from a conceptual failure. The commando units were too large and insufficiently mobile, he argued, to attack distant enemy objectives. Small groups of elite paratroopers, however, could use surprise to their advantage, dropping into the enemy’s rear areas under the cover of night. They would function as hit and run raiders, Stirling reasoned, devastating multiple enemy targets in a single operation.

Paratroopers were the key to convincing his superiors. Germany had used paratroopers in several engagements, but the concept remained a novel one to the British, and Stirling hoped the idea would capture high command’s interest. This was a problem for the lieutenant, however, as Stirling had no experience in leaping out of a plane. He resolved this by “acquiring” a shipment of parachutes (the details are unclear as to how), and performing a jump, along with several “mates,” with no training whatsoever. Stirling injured his legs, but the test convinced him, if no one else, of his idea’s feasibility.

Suspecting that using official channels would only end in rejection, Stirling elected to use the unorthodox, and normally ill-advised, approach of speaking to his commanding general directly. According to Stirling, this involved slipping into the Army’s Middle East headquarters in Cairo while still recovering from his parachuting injuries. Hampered by crutches, guards denied Stirling entry at the main gate. Stirling responded by locating an unguarded section of the wall, and using his crutches to form a makeshift ladder.

Successful, but now hobbled, Stirling limped into the building. Suspecting the guards noticed him, Stirling entered the first available office. Unfortunately, the office belonged to a general he’d crossed paths with before… and one who held a low opinion of Stirling. Stirling retreated hastily, and entered the deputy chief of staff General Ritchie’s office. Ritchie, for unknown reasons, allowed the unknown, trespassing, lieutenant to lay out his idea. Stirling’s concept impressed the general, and Ritchie sold the idea to Commander-in-Chief of the Middle East Auchinleck. Permission to form a new special forces unit soon followed.

Promoted to captain and authorized to raise a force comprised of six officers and sixty men, Stirling selected soldiers who thrived on independence and rapid decision making, atypical traits in a conventional army. His ranks filled with soldiers labeled as “misfits,” or “vagabonds.” Ill-suited to the regular army, these men fit the archetype Stirling sought. The unit received its first designation, L Detachment, Special Air Service Brigade, from Lieutenant Colonel Dudley Clarke, father of the British Commando teams and commander of strategic deception operations.

Initially, the SAS did not enjoy widespread approval. Equipment destined for the unit, for example, mysteriously vanished or arrived elsewhere. The newborn SAS discovered this firsthand when assembling at their first training post, which included a few ragged tents, several chairs, a sign post, and little else. Stirling responded by launching the unit’s first operation: stealing themselves a campsite. Fortunately for the SAS, and unfortunately for an extremely well-stocked New Zealand brigade on maneuvers, Stirling and his men had no objection to thievery. Tents, equipment, and supplies, including bars and a grand piano, abruptly vanished. The SAS’s first mission was a success.

Training, much like the unit, was unorthodox. The SAS’s design hinged on airborne operations, yet Stirling could not acquire a training aircraft. Lieutenant John Steel “Jock” Lewes, head of SAS training, chose to improvise, and safety was not high on his priority list. Lewes simulated paratrooper landings, for example, when he ordered soldiers to jump from a moving truck… facing backward. They performed the exercise at ten miles per hour, then twenty, and finally thirty (some reports state forty), before satisfying Lewes. Injuries to the soldiers and officers piled up quickly, including Lewes, but the improvised, and often dangerous, training created a unit that thrived under adverse conditions.

Stirling pronounced his command combat ready amidst preparations for the upcoming allied offensive, Operation Crusader. General Auchinleck intended to relieve the besieged city of Tobruk, yet the bases for the Axis’ formidable, and out of allied reach, air force represented a significant threat. The Axis believed the Great Sand Sea, a 45,000-square mile desert, precluded southern assaults, and concentrated defenses elsewhere. This was a perfect test for the SAS, and Stirling had designed the unit with this attack in mind. The SAS would parachute in by night, wreak havoc, and escape into the desert via pre-positioned trucks to the south.

Dubbed “Operation Squatter,” Stirling charged into disaster. Hours before the attack, a powerful storm smothered the region with strong winds. Command offered Stirling the option to cancel. Stirling believed canceling would end the SAS experiment, and sixty-five men boarded their planes. Unsurprisingly, the storm blew them off course. Stirling ordered the jump anyway. Strong winds carried men miles from their drop zones. Powerful gusts prevented others from releasing their parachutes and died as wind dragged them across the desert. Their mission was a failure, the SAS headed to the extraction point. Several days passed as survivors struggled in, including Stirling. Sources conflict over the number of losses, but a photo published in 2016 shows the unit following their first operation.

Beaten, but not defeated, the unit recovered quickly. Stirling followed his first failure with a series of increasingly successful operations and set the course for the future of the SAS.

Forces – The Day the SAS Became Famous: Operation Nimrod and The Iranian Embassy