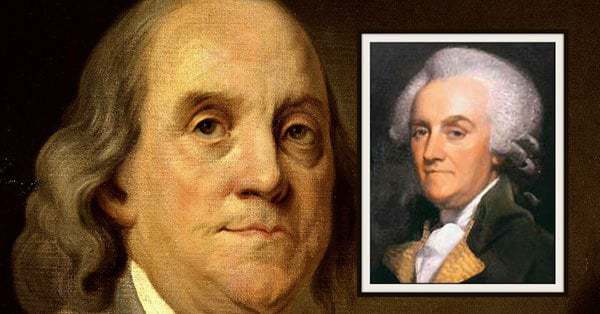 Benjamin Franklin was probably one of our most famous founding fathers, but he had a few skeletons in his closet. His son William Franklin was an acknowledged Loyalist who engaged in activities for the British during the American Revolution. For this, our famous founding father’s son was exiled to England for the rest of his life. The American Revolution drove a wedge between father and son, and they never reconciled before Benjamin Franklin’s death in 1790.

Benjamin Franklin’s son William Franklin was born to an unknown mother in 1730. He was raised by Benjamin Franklin and his common-law wife, Deborah Read. Even though Benjamin was extremely secretive about who William’s biological mother was, William considered Deborah to be his mother. In 1746, at the age of 16, William fought in King George’s War with the Pennsylvania provincial troops. He was a good soldier, rising to the rank of captain in just two years.

As a young man, William Franklin enjoyed a close relationship with his father. In 1752, William helped Benjamin with his famous kite experiment. William was 21 at the time, even though he is mostly portrayed as a young child. After the war was over and his military service ended, William accompanied Benjamin on his political trips to England. Originally sent there by the Pennsylvania Assembly to gather support against the political influence of the Penn family, Benjamin met many influential people and made many strong political allies at this time. His son William was there at this very crucial time, and it probably influenced future activities in William’s life.

While accompanying his father on his trips abroad, William decided to pursue the study of law in England. While he was studying there in 1762, he fathered an illegitimate child named William Temple Franklin who was raised by a foster family. After finishing his training and becoming a lawyer, William and his father worked together in England to get land grants for what is now the midwestern United States. Benjamin was particularly close with the British Prime Minister Lord Bute, and he used his close relationship with the Prime Minister to get his son appointed to a post in the colonies.

Lord Bute appointed William to be the Royal Governor of New Jersey in 1763. William Franklin moved to the New Jersey colony to take up his new post with his new wife Elizabeth Downes, the daughter of a sugar baron from Barbados. One of William’s most significant acts as Royal Governor was that he established Queen’s College, now known as Rutgers University.

The colonial militia arrived at William’s home in January 1776 and placed him under house arrest, where he remained for six months. One can only wonder how Benjamin Franklin felt as he was signing the Declaration of Independence. On the one hand, he knew that he was doing the right thing according to his beliefs. On the other, he was aware that his son would probably be detained as soon as he signed the paper. The Provincial Congress of New Jersey officially ordered William’s arrest after the Declaration of Independence was signed in July 1776. When William was arrested, he refused to recognize Congress’s authority. They took him into custody anyway, and he served two years in prison.

While he was in jail, William was caught gathering support for the British, and he was moved around often. He received some heartbreaking news when he found out that his wife of fifteen years, Elizabeth Downes Franklin, died in the middle of his prison sentence. In 1778, William Franklin was released from jail in a prisoner exchange and transferred to New York, which was still under British control. While in New York, William resumed his Loyalist activities. He joined the Board of Associated Loyalists and was active in supporting guerilla warfare against the Patriots. General Clinton, the British Commander-in-Chief, did not agree with him on this, and the two men disagreed intensely on this matter.

William Franklin became especially well-known as a die-hard Loyalist in his involvement in what became known as the Asgill Affair. In 1782, William was in charge of a raid in which a New Jersey militia officer named Joshua Huddy was arrested. Huddy was a known member of the Association of Retaliation, a group that violently attacked Loyalists and sometimes killed them. William was accused of ordering Officer Richard Lippincott to execute Huddy to avenge the execution of other Loyalists.

The Asgill Affair, and William’s role in it, had long-reaching effects on relations between the British and the Americans. The war was ending, and peace talks were beginning. General George Washington, furious when he heard of Joshua Huddy’s execution, demanded that the British give the Americans Officer Richard Lippincott for trial, or he would execute Captain Charles Asgill, a British officer captured at the Battle of Yorktown. The British tried Lippincott themselves instead of giving him to the Americans but found him not guilty and acquitted him of all charges associated with the death of Joshua Huddy.

Even though Lippincott was tried and acquitted, the Americans weren’t satisfied and still wanted to execute Captain Asgill. Their ally King Louis XVI calmed the waters and convinced the Americans that killing an innocent man would not look good publicly on such a new country. Lippincott was removed to Nova Scotia, and Asgill was allowed to return to England in 1782. The Asgill Affair temporarily ended peace negotiations between Americans and the British at a crucial moment at the end of the war. When this occurred, William’s father was stationed in Paris as the American ambassador to the French court, so he was dealing first-hand with the repercussions of his son’s Loyalist activities. William’s role in the Asgill Affair cemented his fate and his exile.

After the Asgill Affair, William Franklin left the United States when the British left New York and he never returned to America. He became a major supporter of the Loyalist cause in England, claiming that the English should try to get the colonies back. Despite the loss at Yorktown, other British military successes in North America and a naval victory in the war against the French made the British think they still had a chance to win the colonies back.

William tried to reconcile with his father, but Benjamin never seemed to want one. Benjamin, however, did dote on William’s illegitimate son, William Temple Franklin. Temple became Benjamin’s secretary during the American Revolution, and the two developed a very strong bond. William and Benjamin Franklin saw each other one more time in 1785, before Benjamin Franklin’s death in 1790, when he had stopped in England while returning home to America from France. The visit was not necessarily a happy one: it was more to settle administrative and legal matters between them.

Benjamin suggested that William sign over the deeds of land that William owned in the United States to his son Temple, to which William only gave Temple part of it. When Benjamin died in 1790, he left his son almost nothing, showing that even in death, reconciliation wasn’t a possibility. In 1813, William Franklin died. He was buried at the St. Pancras Old Church cemetery, but that gravestone is now missing, so we don’t know where his grave is located.

The story of the tense relationship between Benjamin Franklin and his son William is one of the forgotten stories of the American Revolution: how divided loyalties pitted father against son and drove a wedge between the two men for the rest of their lives. It is shocking to think that the son of one of our Founding Fathers was a Loyalist, and it’s not surprising that he would want to keep that information hidden. After the Revolution, Benjamin Franklin became known for his intolerance for Loyalists, and one wonders if his personal turmoil over his son’s Loyalist actions has anything to do with that.

Time Magazine – My Son, My Enemy