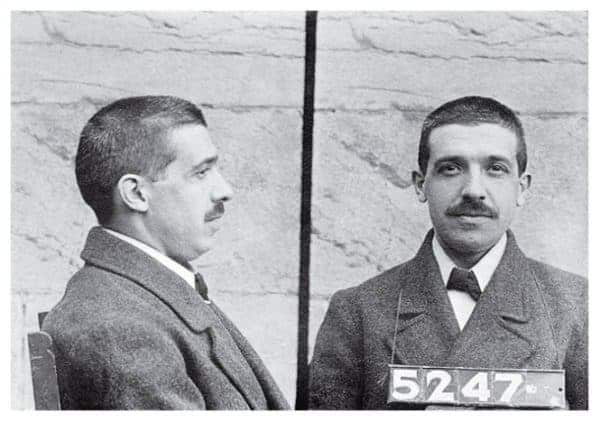 Charles Ponzi earned his reputation as one of the greatest swindlers of all time. He was born in Italy in 1882 but moved to the United States in 1903. When he arrived in Boston, Ponzi had $2.51 in his pocket and spoke little or no English. Over the next few years, he became fluent in the language and worked as a dishwasher in a restaurant and slept on the floor. He eventually became a waiter at the eatery but was fired for theft and short-changing customers.

Ponzi moved to Montreal in 1907 and landed a job as an assistant teller at the Banco Zarossi. It was here where he first saw what would later become the Ponzi Scheme in action. The bank offered 6% interest on deposits which was double the normal rate. However, it was in serious trouble because of bad real estate loans and the founder of the bank funded the interest payments with customer deposits. Eventually, the bank fell, and Zarossi fled to Mexico with millions of dollars.

Ponzi was sentenced to three years in prison for forging a check followed by another spell in jail for smuggling illegal Italian immigrants across the border. In prison, he befriended con artist Charles W. Morse, a man who became a role model for the Italian. After several years where he tried and failed to make a success of legitimate businesses, Ponzi returned to his criminal roots with the scam that made him famous.

In 1919, he found a weakness in what was known as an International Reply Coupon (IRC). IRCs were designed to allow a person in one country to send it to someone in another country who would use the coupon to pay for the postage of a reply. Although IRCs were priced at the cost of postage in the country where it was purchased, you could exchange them for postage stamps in the country where it was redeemed. Profit was possible when there was a difference in these two prices.

Due to post-WWI inflation, the cost of postage in Italy in U.S. Dollars reduced drastically so Ponzi purchased cheap IRCs in Italy and exchanged them for stamps in the United States which were of a much higher value. Ponzi made a 400% profit and set up a stock company to raise money from the public to expand his scheme. He promised to double your investment in three months, and initially, investors benefitted from large profits.

In January 1920, he founded a legitimate firm called the Securities Exchange Company, and within five months, approximately $2.5 million had been invested. By the end of July 1920, Ponzi was making almost $250,000 a day! A lot of people reinvested instead of taking their money; this was a huge mistake as although the scheme was raking in tens of millions, basic financial analysis would have shown it was losing a lot of money. As long as cash came rolling in, Ponzi could pay investors with this new money, but just like the Zarossi scam, the Ponzi scheme was destined to crash.

The big issue was that Ponzi couldn’t change the IRC coupons into cash. He lived a luxurious life and attracted unwanted attention. A financial journalist named Clarence Barron pointed out that there would need to be 160 million IRCs in circulation to cover the investments made with Ponzi’s company. This news caused widespread panic, and while Ponzi bought some time by paying out $2 million, the Boston Post printed a story about his activities in Montreal, and the entire scheme collapsed bringing down six banks and wiping out his investors.

He only served a few years in prison but spent more time behind bars for perpetrating another fraud. Ponzi jumped from scheme to scheme without ever hitting the big time again, and he died in Brazil in 1949.

Parker probably inspired Lustig because his career consisted of ‘selling’ landmarks such as the Statue of Liberty, Grant’s Tomb, the Metropolitan Museum of Art and Madison Square Garden. However, it is his daring escapades with the Brooklyn Bridge which are the hallmarks of his swindling career. Indeed, his antics have even resulted in a new entry in the English lexicon: “If you believe that, I have a bridge to sell you.”

Parker was born in New York City in 1860 and specialized in selling property he didn’t own. His masterpiece was the sale of the Brooklyn Bridge; the famed landmark was completed in 1883. He saw its opening as a chance to make easy money and devised a simple scheme which he used time and again to great effect.

To begin with, Parker would place official-looking ‘For Sale’ signs on the bridge where everyone could see. He would carefully choose his victim who was usually someone from outside the city. Parker approached his marks and explained that he owned the Bridge and wanted to set up a toll booth to charge people who crossed. He said that he needed a person to work in the booth and continued his spiel by suggesting he would make a fortune from the new charge.

Parker told his mark that he wanted to build new bridges and landmarks in different cities, so he didn’t have much interest in overseeing the creation of toll booths. As a result, he was keen to sell and offered the Bridge for a knockdown price (this could be anywhere from $50 to $50,000). Parker set up a fake office complete with forged documents, so the mark didn’t suspect anything was amiss. Most victims paid in cash, and some even paid in installments.

The mark did not know he was the victim of a scam until he tried to set up the toll booth. The police would arrive, much to the embarrassment of the new ‘owner.’ Unlike Lustig, Parker was able to sell the Bridge on a weekly basis for decades. Eventually, his criminal past caught up with him and Parker ended up in Sing Sing prison in 1928 for fraud. He died in prison in 1936 but was apparently very popular with inmates and guards as they enjoyed hearing about his legendary career.

Long before Nigerian ‘princes’ were conning people out of money in email scams, Gregor MacGregor was busy making cash by pretending to rule a non-existent country. That’s right; this audacious con man invented a fake country to swindle money from gullible fools. During his career, MacGregor made over £1.3 million from various frauds (equivalent to £3.6 billion today) with his fake country con netting him approximately £200,000 in the early 19th century.

MacGregor was born in Scotland in 1786 and served in the British Army from 1803 to 1810. He then fought in the Venezuelan War of Independence in 1812 before returning to Britain in 1821. Upon his return, he found a financial climate that was ideal for any self-respecting conman. Wages were rising, living costs were declining, and British investors were seeking something more lucrative and exciting than government debt.

The ambitious Scotsman appeared to answer their prayers when he arrived on the scene in 1822 and claimed he was the prince of land called ‘Poyais’ that was located along the Black River in Honduras. He said the country consisted of approximately 8 million acres of fertile land (larger than the whole of Wales), but he needed development to take advantage of the immense natural resources. After an aggressive advertising campaign, MacGregor persuaded investors to part with their savings in the bonds of a country that did not exist.

He offered investors a Poyais Bond for £200,000 and claimed they would receive a return on investment of 6%, a similar rate offered by real countries such as Peru and Chile. Although Poyais had no record of collecting taxes, MacGregor claimed his country had so many natural resources that export tax revenue would comfortably cover any interest payments on the debt. He was incredibly confident in his conning abilities because MacGregor was interviewed in national newspapers and he even wrote a book about Poyais under an assumed name.

Had investors bothered to look closely at MacGregor’s claims, they would have spotted a number of flaws in his tale. He said the natives were friendly and loved the British; the soil could produce three maize harvests a year, the water was clean, fresh and abundant and there were chunks of gold in the country’s streams. In other words, it was Utopia and too good to be true.

Eventually, MacGregor filled a total of seven ships; two ships containing 250 passengers set out before the rest in September 1822 and January 1823 respectively. Various concerns over the legitimacy of Latin American governments caused shares in Poyais to plummet within months, and the settlers soon learned that they were sold a lie. The thing is, MacGregor did have 8 million acres of land; it was signed over to him by the leader of the Mosquito people in 1820 in exchange for rum and jewelry. The problem was, the land was uninhabitable, and while it looked nice, it was unable to sustain any cultivation.

When the settlers arrived, they found a location with no roads, port or town. The natives were not hostile but did not provide any assistance, and the travelers had to stay and settle because their journey was one way. A ship arrived several months later, and the settlers gratefully hitched a ride to Belize, but two-thirds of them died from fever, malaria or malnutrition. Word was sent to the other five ships to ensure they turned back.

News of the Poyais scam reached London in October 1823 and MacGregor fled to France. He somehow managed to convince another 60 people to invest in Poyais but the Parisian authorities wanted proof of the nation’s existence, and after an official investigation, MacGregor was arrested and imprisoned. Although he managed to get out, his Poyais scam had unraveled and when investors tracked him down in Edinburgh in 1838, he fled to Venezuela, where he died in 1845.

5 – David Phillips and the Pudding Scheme

Although Phillips did not commit a crime, his ‘Pudding Scheme’ deserves mention on the list for its brilliant simplicity. He found an insane flaw in a promotion offered by Healthy Choice in 1999. The company offered up to 1,000 air miles to customers for every 10 product barcodes they sent to the organization.

Phillips is an engineer and the kind of person who enjoys scouring the small print for loopholes in offers such as the one provided by Healthy Choice. It didn’t take him long to see the potential in the barcode offer, so he quickly searched for the cheapest Healthy Choice products. He hit the jackpot by finding a discount grocery store chain that sold individual chocolate pudding cups for just $0.25. Therefore, Phillips knew he could earn 1,000 air miles for just $2.50! In fact, the original promotion was 500 miles for 10 codes, but the company had an ‘Early Bird’ special whereby customers would receive double air miles for redeeming their coupons within the first month.

Phillips didn’t hesitate and purchased every single pudding cup he could find. When he was finished, he spent $3,140 and benefited from over 1.2 million air miles with a value of approximately $150,000. To avoid suspicion and prevent others from copying him, Phillips claimed he was stocking up for Y2J! The next step was to peel off the stickers; this proved to be a grueling endeavor so he had another brainwave. He approached the local Salvation Army and asked for volunteers to peel off the stickers; Phillips promised to donate the pudding in return. Hilariously, he even earned an extra $800 at the end of the tax year because of his ‘charitable donation.’

Although he burned through his air miles (he and his family have traveled to over 40 countries), he currently has four million miles left because he keeps an eye out for frequent flyer incentive programs. In other words, he uses the cheap air miles to get free ones! The moral of the story: Major corporations make mistakes so keep your eyes peeled to take advantage of their stupidity.