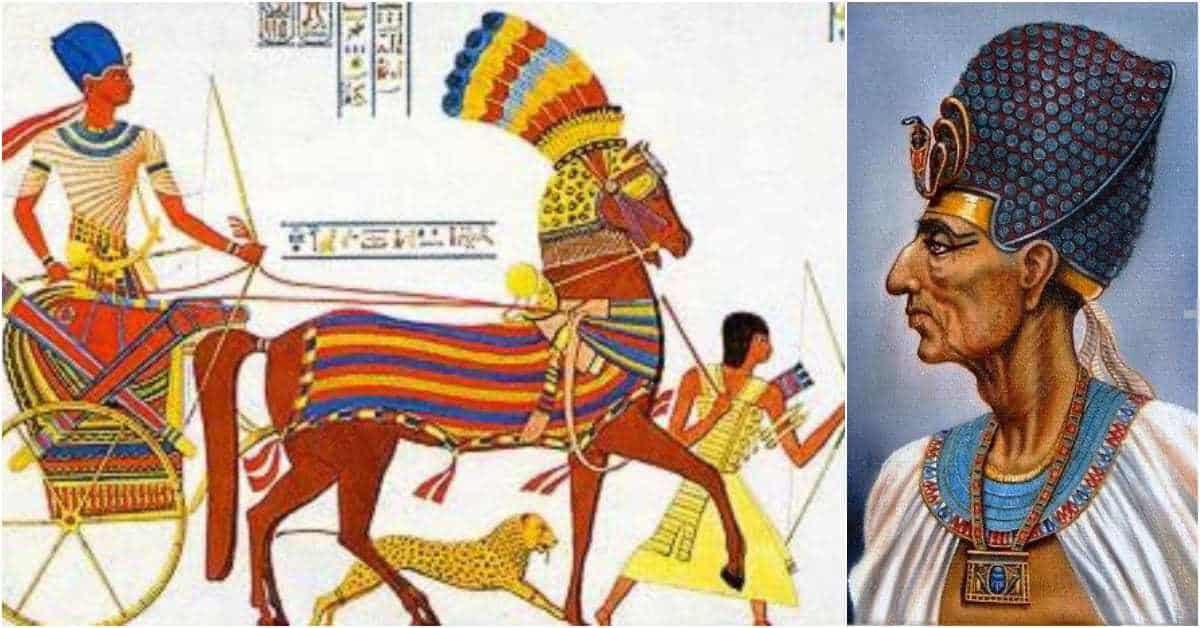 The Battle of Kadesh (believed to have been fought in 1274 BC) was one of the first battles in history where the tactics and formations of both sides were known. We get this information from the legendary Kadesh inscriptions, and it is believed to be the largest chariot battle of all time, even though chariots were used in warfare for another millennium.

Although we have plenty of detail from Kadesh, historians can’t agree on whether the Egyptians won, the Hittites won, or if it was a stalemate. The most likely outcome was a tactical win for the Egyptians even if there was no strategic advantage gained.

The New Kingdom of Egypt was formed in around 1550 BC after the Egyptians managed to expel the foreign Hyksos rulers. This era was to last for almost 500 years and was arguably the most prosperous period in Egyptian history. Although the Eighteenth Dynasty had some famous rulers, Egypt started to lose territory in northern Syria. The first rulers of the Nineteenth Dynasty, Ramses I and Seti I, attempted to restore Egypt’s empire to the great days of the Thutmosis pharaohs.

While Seti captured Kadesh, it lapsed back into Hittite control as that kingdom continued the incursions into Egyptian territory that had begun back in the 15th century BC. Ramses II, son of Seti, became pharaoh in 1279 BC and vowed to regain Kadesh.

His main goal was to permanently drive the Hittites away from Egyptian borders and believed the capture of Kadesh would help him achieve his ambition. Kadesh was known as a great center of commerce at the time and if Egypt could reclaim it, the empire would benefit from increased trade and would also increase its borders.

The main reason why the Battle of Kadesh is such a momentous conflict is that it was the largest chariot battle of all time and became part of the legend of Ramses II. Egypt had expanded its territory significantly during the New Kingdom and was arguably at its greatest extent during the reign of Thutmose III. Much of its success was based on the skill of its charioteers.

When used correctly, the chariot was a phenomenal weapon at the time. It was used to transport an army’s elite warriors, fire weaponry on the move, charge enemy positions, and polish off the remnants of a fleeing army. Egyptian chariots were fast, versatile and easy to maneuver. They were normally pulled by two horses and had one driver. In some cases, one or two soldiers with bows and up to 100 arrows would also be on board.

Soldiers may also have been armed with javelins and curved swords, so they were effective at a distance or close range. At Kadesh, the Egyptians faced a formidable enemy. While Ramses had approximately 2,000 chariots at his disposal, the Hittites had anywhere from 2,500 to 3,700. Overall, there were probably over 5,000 chariots on the battlefield and anywhere between 40,000 and 70,000 soldiers.

In many ways, the reputation of Ramses II as a great military leader is based upon his apparent success at Kadesh. Certainly, he deserves credit for at the very least turning the tide of the battle from near-certain defeat to a stalemate at worst. In 1275 BC, Ramses prepared his army for battle against the Hittites but was determined not to move until he received favorable omens.

He apparently received these omens in 1274 BC because he brought his army to the plains of Kadesh; it is possible that he agreed upon the site of the battle with his enemy, Muwatalli II, the leader of the Hittites. Ramses brought his 20,000 man army and 2,000 chariots and marched in four different divisions but made some serious errors that almost cost him dearly. First, he believed a pair of Shasu nomads who met the pharaoh’s army around 11km from Kadesh. They told him that the Hittite army was around 200km away; Muwatalli was apparently afraid of the Egyptians and had withdrawn.

As it transpired, these nomads had been hired by the Hittites to spread false information. At this point, Ramses had driven his Amun division way ahead of his army. He realized how much trouble he was in when he captured two Hittite scouts. Under torture, they revealed that the Hittites were close by with an enormous force. Muwatalli had an army of up to 40,000 men with 3,000 chariots. The outnumbered Ramses was ambushed by the enemy and had his camp raided.

As parts of the Amun camp fell, Ramses was probably only surrounded by a small number of his personal guard and was in grave danger. It was here that the pharaoh showed his military skill as he bravely fought back to get out of the trap he had foolishly walked into. According to Egyptologist, Margaret Bunson, Ramses helped keep his panicked units calm and “began to slice his way through the enemy to reach his southern forces.”

Bunson wrote that Ramses somehow managed to launch an attack on the enemy eastern wing that was so ferocious that it fell apart and the pharaoh made his escape. Ramses was aided by a basic tactical error from the Hittites. They mistakenly believed that the Egyptians had been routed and were busily raiding the Amun camp when Ramses launched his counter-attack. Ramses effectively utilized his fast and mobile chariots as they were far quicker and more versatile than the heavy Hittite chariots.

Although the Egyptians had escaped annihilation, the Battle of Kadesh was far from over. Muwatalli could still call upon a huge reserve of chariots and infantry, and of course, he was still in command of the city of Kadesh. Ramses forced the Hittites to retreat close to the Orontes River, but Muwatalli reacted by ordering another massive attack, this time with 1,000 chariots. Once again, the Pharaoh was in dire straits, but he had bought enough time for his Ne’arin troops from Amurru and his Ptah Division to arrive on the battlefield.