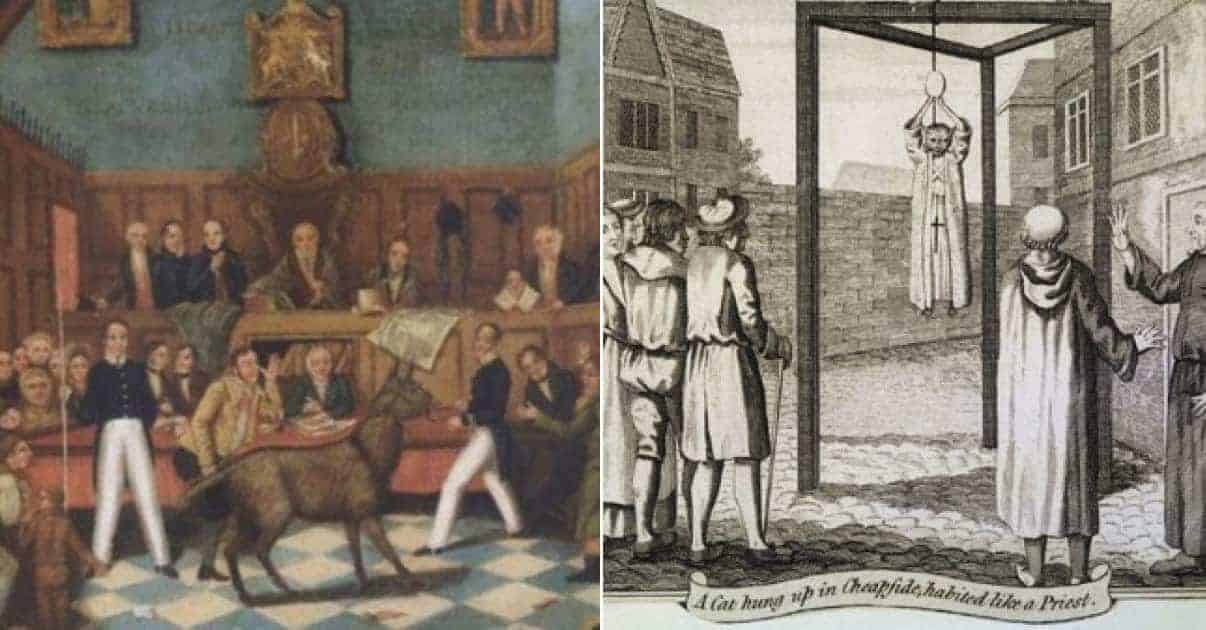 Over the centuries, the judicial process has been tweaked, refined, or completely overhauled, generally with the hopes of making it a more fair procedure. Judges, juries, and the penalties for those found guilty have also changed. Human beings have many traits that set them apart from the rest of the animal kingdom. Our intelligence, use of tools and machinery, empathy, reasoning, and culture are among the things that set us apart from other creatures great and small. The judicial process is no exception. You do not see mice building court rooms or law offices.

What if humans brought animals into their courtrooms, though? That is exactly what happened beginning in the 13th century all the way to the 18th century. Not only did humans try and convict animals under the same law as humans, for centuries special courtrooms were built specifically for animal trial. None of this was just for show. The trials came complete with courtrooms, judges, lawyers, and witnesses.

While this bizarre and antiquated process is foreign to us currently, it is interesting that animals were perceived as having the same moral agency as human beings. We now understand the rule of law cannot dictate other creatures. Animals are not without intelligence; on the contrary, animals display an awe inspiring amount of ingenuity and adaptability. However, we can not expect different species to adhere to the same laws that prevent anarchy and chaos for humans. One could argue that the modern age’s equivalent to animal trials would be the capture and subsequent “putting down” of animals, particularly dogs, who have acted aggressively. Yet, we do not treat them with the same legal agency as our ancestors did.

Animals and insects alike faced criminal charges in different parts of Europe, mainly France. Fontenay-aux-Roses, a commune outside of Paris, France, has the first recording of an animal being tried in court. The accused animals would appear in both secular and church courts, their offences ranging from property damage to murder. Animals were not completely helpless, though. Obviously, animals do not speak in ways humans understand. The answer? Animals were appointed their own lawyers on their behalf. Lawyers would argue the animals intent, witness testimony, circumstance, and overall character of his animal client.

One would think that an animal in such a helpless role would more often than not be convicted, however judges of the time had something some may argue we lack today. Judges held the belief that an animal’s rights were on equal footing with human beings. In accordance to that line of thinking, animals were given freedoms and autonomy, yet their misdeeds were punished as harshly as a human’s misdeeds. The only exception was imprisonment. Once convicted, animals were either put to death or exiled from their communities.

One example of a judge’s grace comes from a court case in 1750. The story begins with a man and his female donkey. Sordid rumors spread about he donkey and man’s relationship; it was claimed he was having an inappropriate sexual relations with the donkey. When the pair were arrested and put on trial, the judge found legitimacy to the disgusting rumors and began the conviction process. Thanks to many testimonies from villagers about the donkey’s gentle demeanor, good virtue, and work ethic, the donkey was acquitted of all charges. They noted, “in word and deed and in all her habits of life a most honest creature.” The judge believed the donkey to be a slave to a deviant and violent master. The donkey’s master received a much deserved punishment: he was to be executed.

Witness testimonies in both past and present day trials are an invaluable tool for convicting or acquitting the accused. Animal trials were no exception, and proved to be the one of the singularly most important facets of the trials. Animals were seen as integral members of the community rather than creatures who simply performed services or provided food, but only domesticated animals were held to such expectations. Wild animals were just that: wild. If animals were going to reap the same benefits of village life as humans, they were expected to shed their wild instincts and become a hard working and well adapted member of the community.

Composure during the trial could also make or break an animal’s case. A pig snorting or a restless goat could all prove to be the poor animal’s undoing. Behaving badly in the courtroom was always seen as a confession to one’s guilt and general unruliness – something not well tolerated in a civil community. For most people, we understand a certain level of composure is required and we all operate under culturally accepted behavioral “do’s and dont’s”. Animals with limited or no understanding of social etiquette would have a difficult time behaving in acceptable manners. What else counted for or against an animal on trial? The judge also considered intention and personal circumstance.

A French case in 1379 highlighted a case where intention meant everything. The son of a swine keeper was brutally attack and “murdered” by two herds of swine. It was said the first herd initiated the attack, but due to uncontrollable impulse, the second herd gleefully began assaulting the man. Both herds were sentenced to death. In 1567, a sow was convicted and put to death by hanging for attacking a 4 month old. It was said that not only did she attack the infant, she did so with “extra cruelty”. It is difficult to place intention and motive on animal attacks. Most are territorial, and at least today, we can assuredly say aggressive animals are rarely operating with malicious intent.

A set of exonerated piglets were spared due to their extenuating circumstance. The mother sow was deemed unfit for village dwelling, but the judge determined that the piglets immaturity simply made them unnecessary accomplices to their wretched mother. The piglets were also tried without any witness testimonies to either condemn or deny any foul deeds. The piglets were saved, and their villainous mother was executed. While the mother’s fate is rather tragic, it is at least comforting to know the power judge’s did wield was dealt somewhat fairly.

Why would humans go to such great lengths to create spaces specifically for animal trials?France in particular had a difficult time with surly farmers refusing to adequately pin up their pigs. It is thought that animal trials were perhaps a way of circumventing meaningless citations to farmers and going the more straightforward route of grisly threat. It was a clear message to farmers: take proper care of your livestock, or they will end up dead much sooner than you had anticipated. The complexities of animal trials are still not fully understood but their facts and myths greatly debated.

It is also known that during this era, there was a strong belief in hierarchical power. God was at the top, humans second, and everything beneath. The only way to restore the power to man was to make animal punishment a formal event. There are many academically inclined answers as to the “why” of animal trials, but farmer intimidation and hierarchical formalities could have been solved with an easier solution. If the people of the time did not genuinely believe animals were intellectually capable of fulfilling the same moral duties humans operate under, execution without trial would have been the best route. Obviously, citizens of the era believed that animals operated under the same moral agency as humans.

As historian Edward P. Evans put it in 1906, animal trials were “a childish disposition to punish irrational creatures”. Perhaps it is easy for us to look back at these antiquated antics and see only misguided and ignorant village people. A people overly concerned with hierarchy or potential sadists looking to wield their legal powers in order to gain sickly satisfaction. The pre-industrial age required humans to work closely with livestock they domesticated themselves. They did not have the same modern day detachment from animals as we do. They spent extended amounts of time taking care of and training their animals. Communities would have had direct interaction with an array of animals who provided necessary work to farmers or nourishment for all.

Rather than label animal trials an imbecilic practice, humans should reflect on the relationships our pre-industrialized ancestors had with their livestock companions. As we become increasingly more removed from the natural world and cement ourselves into a technology dependent world, we can begin to lose sight of the characteristics animals possess that make them so worth cherishing. Anthropomorphism is not necessary for us to feel more connected to the species we share our planet with, nor are overly complicated judicial processes. Simply appreciating animals for the wild and incredible beings they are is all that is required.