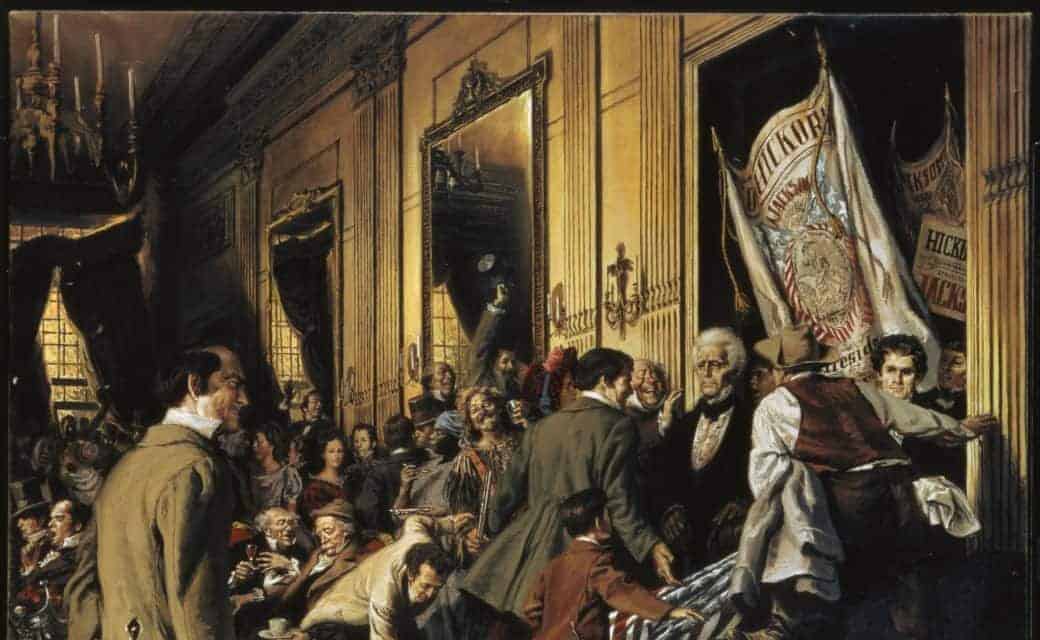 Whether by door or by window, Jackson found a way out but did not stay, opting instead to sleep at a nearby hotel. Though Jackson left, the party raged on and more observers described the scene with revulsion. One James Hamilton Jr. wrote that “the mob broke in, in thousands…in one uninterrupted stream of mud and filth; among the throng many subjects for the penitentiary…” Indeed, the scene was chaotic. White House china was broken, glassware shattered, thousands of dollars of damage was suffered, leading Hamilton to conclude he was watching a “Saturnalia”.

Spiked punch was served along with ice cream, cake, lemonade and other refreshments, fueling the party atmosphere. Finally, a White House steward saved the situation by taking the alcoholic punch and other refreshments outside. The great throng moved outside in tow, but not before Mrs. Smith tells us that “ladies fainted, men were seen with bloody noses and such a scene of confusion took place as is impossible to describe”. Luckily, the fast-thinking steward seems to have saved the day, as the pressure and enthusiasm of the people in attendance slowly dissipated.

The 1829 inaugural reception was the most unusual event of its kind in American history. It was nearly as unusual as Andrew Jackson’s actual presidency. On the one hand, the event showed us how enthusiastic common people were for the unusual new President. On the other, it showed us how easily passions can result in damage, chaos and uncertainty. Our socialite, Margaret Smith concluded that Jackson was the “People’s President” through whom the “people would rule“. But she also saw the dark potentialities of such energies as she prayed: “God grant that one day or other, the People do not put down all rule and rulers.”

Smith was worried that popular exuberance would lead to a lawless tyranny by the masses and a chaotic dissolution of the order. She feared that the common mob may take over, but never seemed to contemplate that mob rule was not necessary for lawlessness and chaos to manifest itself. Jackson, as President, provided multiple demonstrations of shocking lawlessness and chaos himself. He defied the Supreme Court and oversaw the termination of the nation’s federal banking system, causing America’s first serious economic depression.

Prior to his presidency, Jackson’s record as a war hero is unquestioned. He won a decisive battle in the War of 1812. Outnumbered and wholly outclassed, Jackson and a ragged band of frontiersmen, militia members, Native Americans and slaves stopped a larger, professional and well-disciplined British army from taking the city and shutting down American access to the vast territories of the Louisiana Purchase. His actions concerning the conquest and administration of Florida from the Spanish, though more controversial, restored order to America’s southern frontier and reinvigorated an area languishing under the control of a quickly collapsing Spanish empire.