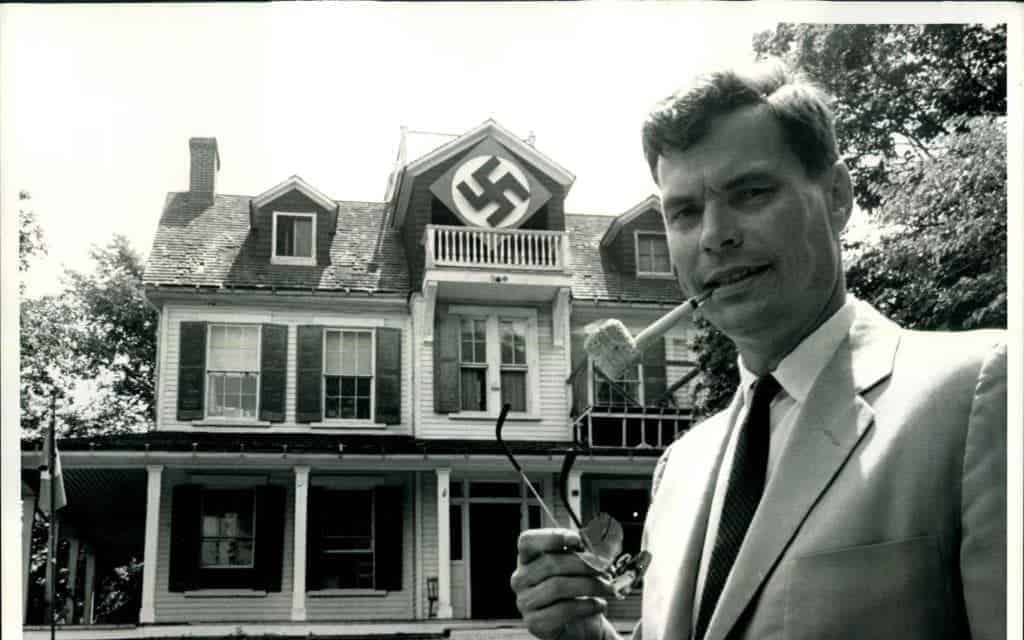 The term “alt-right” was a hot-button word in the American media landscape during last year’s presidential campaign and election. To some people, the far-right wing ideology of the alt-right might have seemed like it appeared out of nowhere, but belief systems of this nature have been present in America, some more in the public eye than others, for many years.

In fact, during the 1960s, the American Nazi Party grabbed headlines and created controversy, all under the leadership of a man named George Lincoln Rockwell. The man who eventually founded and led the American Nazi Party was a decorated World War II and Korean War veteran born in Bloomington, Illinois in 1918. Rockwell’s parents were both vaudeville comedians, and his father’s friends included Groucho Marx and Jack Benny. He grew up traveling with his entertainer parents, and when they divorced, he split time New Jersey and Maine being raised by both parents.

Rockwell enlisted in the Navy in 1941, and eventually rose to the rank of Lieutenant Commander, serving in the Atlantic and Pacific theaters in a number of capacities, mostly in reconnaissance and training. During the late 1940s and until the Korean War started, Rockwell worked as an illustrator and began his own advertising and publishing businesses. He also married and started a family.

Rockwell was called back into active duty in 1950 as a Lieutenant Commander to train pilots in San Diego. It was during this period in California in the early 1950s that Rockwell began to embrace anti-Semitic and anti-Communist ideology. He was influenced by the writings of Adolf Hitler, as well as the Communist witch hunts conducted by Wisconsin Senator Joseph McCarthy. In 1952, the Navy assigned Rockwell to Iceland. Family members were not permitted to accompany Navy members to Iceland, so Rockwell was separated from his wife and children. The distance became too much, and Rockwell and his wife divorced.

During his time in Iceland, the Naval Commander became further radicalized. He read Hitler’s Mein Kampf at least a dozen times, and began to believe in the need for an American Nazi Party. Rockwell remarried an Icelandic woman in 1953. The couple honeymooned in Germany, near Hitler’s mountain retreat of Berchtesgaden. Rockwell began a new family with his Icelandic bride. In 1954, the Navy assigned George Lincoln Rockwell back to the United States, this time in Maine.

The next year, Rockwell and his family relocated to the Washington, D.C. area. He went back to his publishing roots, and started a magazine entitled U.S. Lady that catered to the wives of U.S. military personnel. The magazine was short-lived, and over the next few years, Rockwell flirted with right-wing groups and publications, moving his family to different cities, before ending up back in the Washington, D.C. area.

In 1958, Rockwell decided he no longer wanted to sit on the sidelines. He organized his first demonstration in Washington. The following year, he founded the American Nazi Party. Rockwell’s new party was headquartered in Arlington, Virginia, just outside Washington, D.C. Rockwell’s new group immediately garnered headlines, and in February 1960, the U.S. Navy determined he was no longer fit to serve in the Naval Reserves because of his desire “to foster religious and racial hatred.”

Rockwell spent the rest of 1960 organizing protests on the National Mall in Washington and at other sites, espousing his twisted beliefs and hatred across the country. The leader of the American Nazi Party also began releasing his new publication, The National Socialist Bulletin, later renamed The Stormtrooper Magazine.

Rockwell’s party wore Nazi uniforms and marched with Nazi flags down American streets. He helped the Ku Klux Klan organize against Civil Rights protesters, and he also became an outspoken Holocaust denier. Rockwell told a reporter, “I don’t believe for one minute that any 6,000,000 Jews were exterminated by Hitler. It didn’t happen.” Rockwell attempted to counter the Civil Rights iconic Freedom Riders movement with his own “Hate Bus,” a Volkswagen van decorated with racist slogans and imagery that he drove to rallies. The BBC referred to Rockwell as the “American Hitler.”

Rockwell continued his hateful crusade throughout the 1960s, speaking at rallies and universities, leading demonstrations, and debating notable African-American activists such as Black Panther Stokely Carmichael. Rockwell also began using the term “White Power” in 1966 in direct response to the Black Power movement.

Cut Down By One Of His Own

On August 25, 1967, a former American Nazi Party member, 29-year-old John Patler, shot and killed George Lincoln Rockwell while he was leaving a laundromat in Arlington, Virginia. In addition to being a former member of Rockwell’s party, Patler was also the editor and cartoonist for The Stormtrooper Magazine. Rockwell had kicked Patler out of the American Nazi Party in 1967 after an argument about the group’s policies.

Rockwell was 49-years-old at the time of his death. His party was immediately taken over by his second in command, Matt Koehl, who led the neo-Nazi organization until his death in 2014. John Patler served 8 years in prison for the murder of Rockwell.