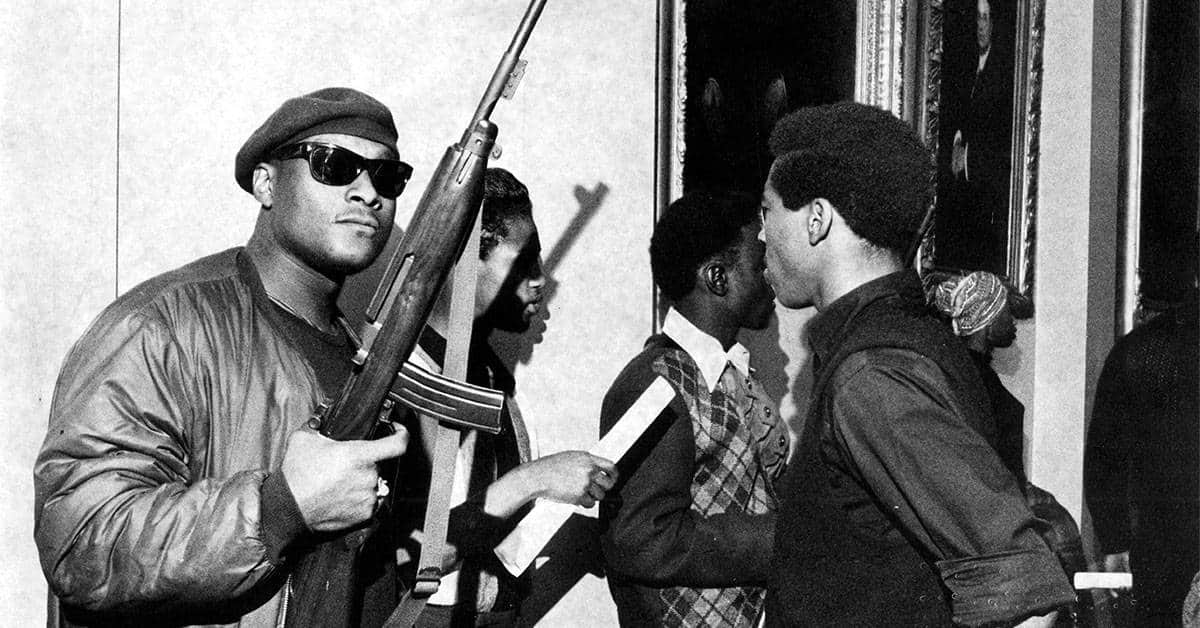 Originally known as the Black Panther Party for Self-Defense, this group represented an important movement in the Civil Rights era. It was co-founded in Oakland, California by Huey Newton and Bobby Seale in 1966 and within a few years, it has reached its peak membership level and had offices in 68 cities.

There are still a number of misconceptions surrounding the group, which dissolved in 1982. For example, some people still perceive the Black Panthers as violent militants who were anti-white and chauvinistic. In reality, the group harbored a desire to improve the lives of African-Americans that lived in poor communities. During their short history, they were involved in a number of innovative projects, some of which survive today.

With a Few Exceptions, The Black Panthers Group Was Not Particularly Violent

Despite the passage of civil rights legislation in the 1960s, African Americans continued to suffer from social and economic inequality. A reduction in public services and employment opportunities led to widespread urban problems which culminated in various uprisings such as the Watts riot in L.A. in 1965. Police were given greater power to deal with protests which meant an increase in violence against citizens; primarily African-Americans.

After the assassination of Malcolm X in 1965, two students from Merritt Junior College, Huey Newton, and Bobby Seale formed the Black Panther Party for Self-Defense in 1966 although they shortened the name to the Black Panthers soon after. The group quickly looked to differentiate itself from organizations such as the Nation of Islam. While African American cultural nationalists were often anti-white and regarded all Caucasians as oppressors, the Panthers were only opposed to racist whites and aligned themselves with white people who fought against racism.

One of the major misconceptions about the group was that they were militant and prone to violence. While some dubious characters allied themselves with the group, the Panthers as a whole were against violence. In 1967, the Panthers protested against the Mulford Act, a law designed to make the bearing of loaded weapons in public illegal. Some of their members caused controversy by standing in front of Sacramento’s State Capitol Building with large guns. Certain sections of the media used this imagery to portray the group as violent unfairly.

They Were an Organized Group That Advocated Social Change

Another myth surrounding the Black Panthers was that it was an unorganized rabble. In reality, the group had very clear goals and set out its agenda in a 10-Point Plan. The Panthers demanded freedom from oppression for poor black communities, greater employment opportunities, improved housing & education, greater financial equality, freedom for political prisoners, free healthcare and an end to police brutality against African-Americans.

The Panthers were at the center of a news storm in 1967 when Newton was arrested after a shootout with police; one officer was killed. Newton was charged with the murder but protested his innocence. The saga led to a â€˜Free Huey’ campaign, and the co-founder of the party was released three years later.

The Panthers began to spread across the United States and around the world. The Southern California chapter was founded in 1968, and ultimately, there were chapters in 48 states and several countries around the world including Japan, England, Germany, Sweden, South Africa and France.

The group was also exceptionally media savvy insofar as they knew how to appeal to what they believed photographers and journalists looked for when covering the news. Within a few years of its formation, the Black Panthers group was a legitimate voice of protest for disenfranchised African-Americans. Their voices were heard on mainstream news stations and images of prominent members were printed in magazines and papers. The Panthers were able to use the sudden avalanche of attention to institute real change.

One of the major achievements of the group was to popularize the â€˜Black is Beautiful’ mantra. They proudly paraded their afros and encouraged black women to display their natural beauty. The group’s desire to help poor African-Americans wasn’t just empty rhetoric. As well as continually challenging police brutality, the Panthers launched approximately 35 Survival Programs and provided free community help such as legal aid, assistance with transportation, free shoe distribution, education and TB testing among other things.

One of the Black Panthers’ most successful projects was its Free Breakfast for Children Program which began in January 1969. The party spent two hours every morning cooking breakfast for kids in poor neighborhood schools. According to one member, David Lemieux, the group read studies that showed kids perform better in school when they have eaten breakfast. The Panthers served 20,000 meals a week.

Sadly, J. Edgar Hoover’s hatred of the group led to the demise of the Breakfast Program in its original form. Although party members did their best to ensure kids got healthy and balanced meals (they consulted with qualified nutritionists), the breakfast program was regularly interrupted by local officials. Fortunately, the program lived on in the form of the School Breakfast Program which was instituted in 1975 by the federal government.

To say that the Black Panthers were a group mired in controversy is an understatement. Hoover feared the growing movement and formed COINTELPRO, an organization designed to dismantle Black Nationalist organizations. According to former Panther member, Ericka Huggins, they were followed and harassed every day and had their phones tapped. Although COINTELPRO was supposed to target all Black Nationalist groups, over 80 percent of its actions were against the Panthers.

The Panthers were often on the wrong end of police brutality although some members did not help their cause. In 1968, Eldridge Cleaver, one of the most prominent members of the group, led several members on an ambush of the police. In the resulting shootout, 17-year old Bobby Hutton died. The level of violence involving the group escalated dramatically in the months following the shooting. Cleaver was arrested for his role in the shooting, and in August, three Panther members were killed in another shootout with the police. In September, Newton was convicted of manslaughter and Cleaver fled to Cuba. In October, another Panther died in a shootout with police.

The police were criticized in the wake of the deaths of Mark Clark and Fred Hampton in December 1969. The Panthers fired only one shot between them while the police fired 80. In May 1969, a member of the group, Alex Rackley, was tortured and murdered by other Panthers as they believed he was a police informant. Female members came to the fore in the 1970s including Assata Shakur, Angela Davis (never an official member) and Elaine Brown who became the first Chairwoman of the party in 1974. Far from being a male-dominated organization, the group was primarily kept together by women in its later years.

The organization endured a slow but steady demise from the mid-1970s onward. Although COINTELPRO had an impact, the Panthers mainly fell apart due to the loss of key members. After a short spell in Cuba, Cleaver went to Algeria but was expelled from the party in 1971. Newton fell further into the abyss, and his friends and acquaintances were concerned about his increasingly erratic behavior. He assaulted police officers and murdered a prostitute in 1974, so he fled to Cuba. Meanwhile, Bobby Seale ended his association with the party in that year. There were rumors that Newton severely beat him with a bullwhip, but Seale denies it.

Newton returned to America in 1977 and grew concerned at the fact that female members outnumbered males. He authorized the beating of Regina Davis as a punishment for reprimanding a male colleague in a professional capacity. This action angered and frightened Brown who quit the party and moved to LA. Then the group tried to murder a witness against Newton in October 1977. By 1980, the party’s membership was just 27 and its sponsored school closed after it was revealed that Newton was stealing money from it to pay for his drug addiction.

The impact of the Black Panthers went far beyond Oakland. At its height, it gained tremendous momentum and was seen as a champion of social justice. In the end, internal disputes and the close attentions of Hoover and the FBI led to its dissolution. For the record, Cleaver died in 1998; Newton was shot dead in Oakland in 1989 and Seale is still alive today.