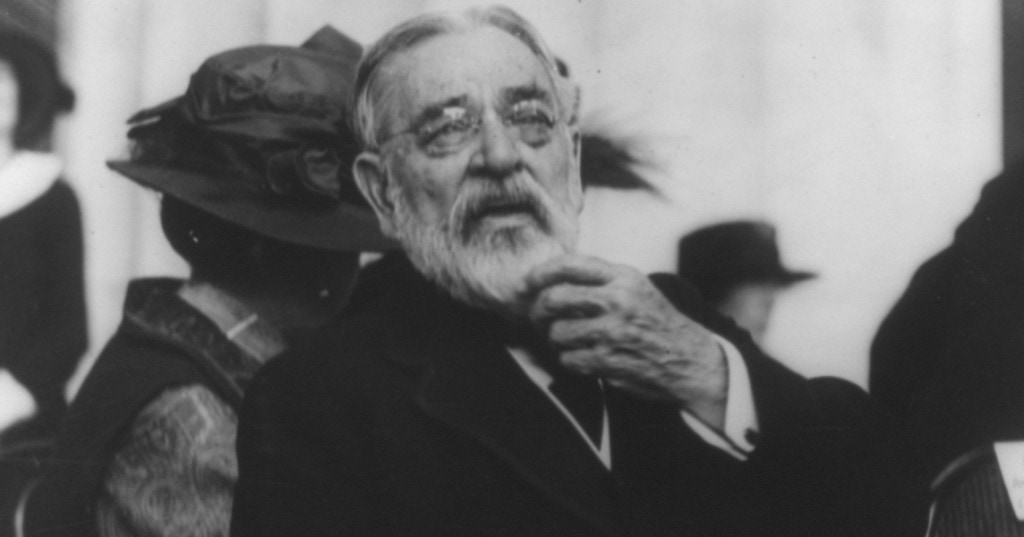 The thing is, if it weren’t for who his father was, there would be very little to distinguish Robert Todd Lincoln from any other late-19th century politician. He would receive just about as much study as any other Secretary of War or Minister to Britain of those times, and historians would move on. However, historians can’t ignore that he was his father’s son, which makes him just a tad bit more interesting.

Also interesting is a few very…unusual coincidences that took place throughout his life. The first one that we’ll look at is what we’re calling the Booth Coincidence. As everyone knows, Abraham Lincoln was assassinated on April 14, 1865, when John Wilkes Booth shot him in the back of the head while Lincoln was watching a play at Ford’s Theater in Washington D.C.

Everyone knows the story surrounding the assassination and the conspiracy that Booth and his cohorts had to murder both the Vice President and the Secretary of State on the same night they planned to kill Lincoln.

What isn’t so well-known is that Robert Todd Lincoln owed his life to Edwin Booth, John Wilkes Booth’s brother. The incident took place in Jersey City, New Jersey, while Robert Todd Lincoln was waiting on a train platform. No historian is sure when it happened, but most are certain that it happened before the assassination of Abe Lincoln in 1865, but that it wasn’t too long before.

Lincoln wrote about the encounter in a letter to the editor of The Century Magazine in 1909: “The incident occurred while a group of passengers were late at night purchasing their sleeping car places from the conductor who stood on the station platform at the entrance of the car. The platform was about the height of the car floor, and there was of course a narrow space between the platform and the car body. There was some crowding, and I happened to be pressed by it against the car body while waiting my turn. In this situation the train began to move, and by the motion I was twisted off my feet, and had dropped somewhat, with feet downward, into the open space, and was personally helpless, when my coat collar was vigorously seized and I was quickly pulled up and out to a secure footing on the platform. Upon turning to thank my rescuer I saw it was Edwin Booth, whose face was of course well-known to me, and I expressed my gratitude to him, and in doing so, called him by name.”

Edwin Booth had nothing to do with the assassination of Abraham Lincoln. In fact, according to several historical sources, he was appalled at his brother’s actions. At the time that he saved Robert Todd Lincoln’s life, he had no idea that he had saved the life of the President’s son. It was only after one of Lincoln’s comrades in the Army sent him a letter that Booth knew who he had saved that day. Despite the actions of his brother, Booth received a letter of gratitude from Ulysses S. Grant when Grant took office.

The other coincidence that revolves around Robert Todd Lincoln is his apparent bad luck when it comes to proximity to presidential assassinations. Prior to Abraham Lincoln, no US president had ever been killed while in office, though there had been several attempts (including at least on close call for Abraham Lincoln several months before his assassination at the hands of John Wilkes Booth in 1865).

On April 14, 1865, Robert Todd Lincoln was not at Ford’s Theater when his father was shot, contrary to some stories you’ll find on the Internet. Instead, he was at the White House. After he heard the news, he rushed to be with his parents, and was present when his father died the next morning.

Security surrounding the president in those days was not what it is today. Abraham Lincoln was unusual in those days in that he actually had security (mostly due to the Civil War and the conflict between the North and the South). It wasn’t until 1902 that the Secret Service took over active protection of the President. It only took two more assassinations before security surrounding the President was beefed up.

On July 2, 1881, while going through the Sixth Street train station in Washington D.C. President James A. Garfield was shot by Charles J. Guiteau. The man was almost completely insane, as his reason for shooting the president was a perceived insult after being denied a position in the government (that he was never owed). The odd part is that Robert Todd Lincoln was Garfield’s Secretary of War at the time and was present in the train station when the President was shot. He was standing only a few feet away when Guiteau walked up to Garfield and shot him twice, once in the arm and once in the back. Garfield died later that year.

The reason why Garfield had no dedicated security around him was that, at the time, Abraham Lincoln’s assassination was considered a fluke and merely a byproduct of the tensions of the Civil War. After his assassination, not much changed in terms of security, however the fence at the White House was changed a few years later.

In September of 1901, Robert Todd Lincoln had been invited by President William McKinley to attend the Pan-American Exposition in Buffalo, New York. The fair was meant to promote trade and industrial cooperation amongst “American Republics.” At the time it was one of the most expensive projects the US had ever undertook outside of war.

On September 6, 1901, Lincoln stood witness as the third American President was assassinated. McKinley was standing at one of the exhibits at the Pan-American Exposition greeting people who were also their viewing the attractions when Leon Czolgosz approached him and shot him twice in the abdomen (only one actually hit the President as the first shot ricocheted off of a coat button).

Robert Todd Lincoln recognized that it was highly unusual for one person to be nearby at three presidential assassinations. He apparently turned down any later requests to be near a president, saying, “No, I’m not going, and they’d better not ask me, because there is a certain fatality about presidential functions when I am present.” Robert Todd Lincoln died July 26, 1926, just 37 years before the fourth US president was assassinated in November of 1963.