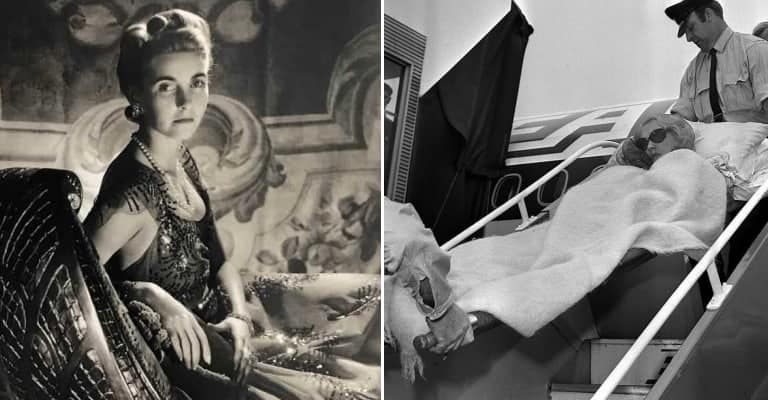 8. She Was The Poor Little Rich Girl

Hutton was born on November 14, 1912, in New York City. While she was born to an extremely wealthy family, she is known to be America’s first “poorlittlerich girl” and much of this is because of her childhood. While this includes the death of her mother, it is mostly because of the life she lived after her mother’s passing. It did not take long for Hutton’s father, Franklin, to fall in love again and marry another woman, who has famously become known as Hutton’s wicked stepmother, Irene Curley Bodde.

Because neither her father nor stepmother paid much attention to her, Hutton was neglected and mostly cared for by nannies, governesses, and relatives. Her governess, who was calledTiki, requested bodyguards for Hutton’s own protection. While she was stillyoung, she went to live with her father’s sister for a while. She also stayed with other relatives, such as Marjorie Merriweather Post Hutton, who married Franklin’s brother, Edward. Because Hutton was sent to live with different relatives, she moved around often as a young child.

Around the age of 12, Hutton’s father and stepmother began sending her to a boarding school. However, even living with some children her own age, Hutton continued to isolate herself from others. Most of the other students picked on Hutton because her father and stepmother were so neglectful. In fact, Hutton spent many holidays alone in the schools because no one came to pick her up to take her home, even during Christmas.

7. The End Of Her Life Was Just As Sad As The Beginning

Unfortunately, it seems that Barbara Hutton was never able to escape the sadness and tragedy of her life. While Hutton did have happy moments and times, the last few years of her journey were filled with tragedy, struggles, and illness. Of course, one of the toughest times of Hutton’s life happened when her only child, Lance, passed away in a plane accident in 1972. Like most parents who have faced such a devastating loss, Hutton never got over the loss of her son. Those who were closest to her state that Hutton began to lose interest in living once she heard the news that her son has passed.

From that point, Hutton’s health began to deteriorate. Not only did Hutton struggle with walking due to breaking her hip and refused medical care immediately after the injury, but she also started to go blind. Many people speculate that this was another reason Hutton requested to be carried or pushed around in a wheelchair when she was out and about, she did not want people to know she was going blind. Two weeks before Hutton passed away, she was discharged from the hospital, where she was receiving treatment for pneumonia. Whether this illness was a factor in the heart attack that took Hutton’s life on May 11, 1979, at the age of 66 is unknown.

6. Barbara Hutton Found Her Dead Mother’s Body When She Was A Young Child

Whenever people would ask Hutton about her mother, she would barely respond. In fact, all Hutton would typically say was her mother passed away when she was a young girl. Whether people knew the full story of her mother’s passing during Hutton’s lifetime remains to beunknown. However, today, we know the death of Barbara Hutton’s mother, Edna Woolworth Hutton, was very tragic; especially for young Hutton. Edna, who was married to Hutton’s father, Franklin Laws Hutton, suddenly passed away when Hutton was only four years old.

The tragedy occurred on May 2, 1917. Edna Hutton, who was 33 years old, was found dead by her four-year-old daughter. The reports said she died from mastoiditis, which is an infection that goes into the air cells of the skull behind the ear. Basically, everyone believed she died from suffocating. Therefore, the coroner decided against doing an autopsy. However, today, it is thought that Edna killed herself. The belief is she found out her husband was unfaithful, so she decided to poison herself, leaving her daughter to discover her body in the Plaza Hotel suite.

5. Because She Never Sought Treatment For An Injury, She Had To Be Carried Around

Hutton had many physical and psychological problems throughout her life and sought treatment regularly. In fact, Hutton missed her son Lance’s second marriage due to an illness; there was one situation where Hutton should have found therapy from a doctor but refused. This situation happened when she was in Rome. The year was 1971 and Hutton, who was almost 60 years of age, was walking when she tripped over some carpet, fell, and broke her hip. While it is reported that she did see a doctor eventually, she delayed treatment for a period of time.

No one knows why Hutton did not seek the treatment of a doctor immediately after falling and breaking her hip, especially when she seemed to seek treatment for many other injuries and illnesses. Whatever the reason, this choice left Hutton with extreme pain and many complications with her hip until the end of her life. These complications were said to make walking too painful and challenging for Hutton that she had to be carried around for the rest of her life, at least if she was not in a wheelchair.

4. She Was Married A Total Of Seven Times

Hutton had a favorite saying that money did not buy happiness. If you look at Hutton’s seven marriages, you might believe her. On the outside, Hutton looked like she had it all. However, on the inside, her life was filled with psychological problems and abuse. She first got married in 1933 to Alexis Mdivani, who claimed to be a prince from Georgia. Hutton was practically forced to marry Alexis because his brother threatened Hutton with negative publicity if she refused. After Alexis spent the $1 million dowry and more millions of Hutton’s inheritance, the couple divorced in 1935.

Kurt Haugwitz-Reventlow was Hutton’s second husband and father of her only child, Lance. They married in 1935 and Kurt quickly dominated the relationship through his physical abuse, which eventually sent Hutton to the hospital. The two divorced in 1938. In 1942, Hutton married actor Cary Grant. The two genuinely seemed to care for each other, but due to Hutton’s psychological issues, they divorced three years later. In 1948, Hutton married Igor Troubetzkoy in Switzerland. However, in 1951, he filed for divorce.

Hutton’s fifth marriage was to Porfiri “Rubi” Rubirosa. This marriage only lasted for about 53 days, from December 30, 1953, to February 20, 1954. In 1955, Hutton married friend and German tennis player, Baron Gottfried Von Cramm. The two would end up divorcing about four years later, in 1959. Finally, Hutton married Pierre Raymond Doan in 1964. However, in 1966, the couple would divorce. This last union would be Hutton’s seventh and final marriage (and divorce). However, this does not mean Hutton did not have relationships after.

3. Her “Coming Out” Ball Cause A National Scandal During The Great Depression

While debutante balls still exist, they are not nearly as popular today as they were during Hutton’s lifetime. In fact, during Hutton’s time, if your parents had money you had to be a part of the debutante ball. This concept was known as your official arrival into society. These balls were extraordinarily fashionable and extravagant. Usually, the parents had no spending limits on what their daughter’s debutante ball cost because they wanted to show off their wealth and let others know their child was no on the marriage market.

Nearly everything Hutton did for and during her debutante ball was normal for her social standing. The party’s price tag was around $80,000, and she had all the best. Like most socialites, Hutton was 18 years old, but the timing was miserable because it was at the beginning of the Great Depression. Newspapers were quick to pick up on Hutton’s ball and what it cost. They reported it, and not many people were pleased about the cost. People all over America stated that this money could have gone somewhere else to help the current situation the country faced. The coverage became so horrifying for Hutton that she was sent to Europe so that she could escape it.

Starting in her childhood, Barbara Hutton lived up to her “Poor Little Rich Girl” title whether she wanted to or not. This title started around the time she was four years old and found her mother’s dead body in their suite. The title continued as Hutton dealt the emotional abuse from the neglect of her parents and stepmother throughout her childhood. While some, including Hutton, may have hoped she would have found better days as an adult, this did not occur as many would have wished. Because of all the difficulties of her life, Hutton turned to drugs and alcohol.

It is believed that her addiction and eating disorder, which was anorexia, began with her second marriage to Kurt. Many people think Hutton started to turn to drugs and alcohol to try to numb herself from the physical abuse at the hands of her second husband. It was also in her early adulthood when Hutton began struggling with her physical appearance and became anorexic. During her third marriage to Grant, he started to feel that Hutton was a hypochondriac and didn’t need the surgeries or have all the illnesses she claimed to have.

1. Barbara Hutton Went From One of the Wealthiest Women In the World to Nearly Penniless

One of the biggest challenges people of a higher-class status have is trying to teach their children how to handle money. This problem was one problem Hutton’s family members had with her. So it seemed like no matter how hard they tried to control Hutton’s spending, they would come out empty-handed. From a young age, Hutton enjoyed shopping and spending money. However, this is not to say that Hutton was selfish with her spending. In fact, Hutton was known to be very generous with her money. Some might say she was generous to a fault.

While Hutton was known to help support and buy lavish gifts for her friends, it was mostly her many husbands, except for Cary Grant was her most expensive taste. While she was known to spend millions of dollars on her mansion, her husbands often did the same. Then, of course, there were the best and expensive cars and jewelry. There were also numerous divorces, with six of her seven husbands leaving with some type of settlement. Her first husband cost her about $2 million while her second husband $1.5 million and her fifth about $2.5 million. When Hutton died at 66 years old in 1979 from a heart attack, she had only $3,500.

“The Strange, True Story Behind One Of The Saddest â€˜Phantom Thread’ Characters.” Dan Callahan, Nylon. January 2018.

Wide Open Eats – What Happened To All the Woolworths?

The Guardian – Woolworths: The Rise And Fall Of The Department Store Empire