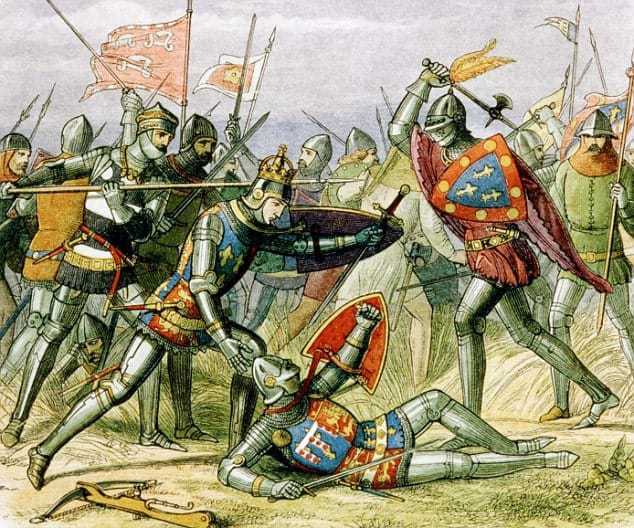 King Edward III took control of the English throne when he was just 17 in 1330 by having his mother’s lover executed. In 1340 the kingdom faced numerous problems with mounting debt due to a number of very costly alliances. This forced Edward III to become more involved with the armies in order to reduce the costs and secure his position of King against growing opposition.

With his control of the armies, he was able to make some substantial gains in the Hundred Years’ War, defeating the French army at the Battle of Crecy. At the Battle of Neville’s Cross, he defeated and captured King David II of Scotland which meant that the northern English borders were secured and the war was no longer happening on two fronts. His successes continued in 1346 when he managed to take Calais from the French.

Soon after this domestic issues forced the army to slow its advance in to France. The Black Death ravaged the country and forced wages to skyrocket as a third of the country was killed and farm labor was hard to find. It took until the 1350s for Edward and his son Edward, The Black Prince to be able to resume their war efforts.

When his son took King John II of France prisoner the course of the war changed. Edward III decided to make a claim on the French throne since he had a number of French possessions, the French King in custody and the government of France nearly in shambles. However, in 1359 the campaign to take the throne was not conclusive and therefore in 1360, he relinquished all rights to the French throne and released King John II.

In return, he kept his French possessions and extracted a hefty ransom for King John II. The rest of King Edward III’s reign was marked with military failure and political struggles.

King Henry V was another King who felt the need to join his men and prove himself on the battlefield. He took the throne after the death of his father Henry IV in 1412. He came to the throne promising to rule over a united England and sought to bring the country together by forgiving some and punishing others depending on how big of a threat to his throne he believed them to be. His rule was marked by relative stability and peace at home which allowed him to focus his efforts on the ongoing Hundred Years War.

In 1415, Henry V headed for France with the intention of making a claim on the French throne. It was the English opinion that there was an English claim to the throne owing to the same lineage that Edward III had claimed. Henry V wanted to unite the French and English thrones and put an end to the question of French succession once and for all.

His forces took the fortress at Harfleur and headed toward Calais. On October 25, 1415, his forces were intercepted by a French army at Agincourt. Despite being malnourished, fatigued and outnumbered, Henry V’s army took a substantial victory against the French army. It was largely the position of the French army that caused their downfall, heavy rains had turned the ground to mud and much of the French forces were unable to move and were simply hacked to death where they stood.

In 1417, Henry V renewed his war efforts in France. Normandy fell and in 1419, Rouen followed. By August 1419, Paris was surrounded by English forces. In 1420 the Treaty of Troyes recognized Henry V as heir to the French throne and Henry married Catherine of Valois, the daughter of the French King. Fighting continued in France laying siege to several fortresses including Meaux in 1422. It was the siege of Meaux that brought an end to Henry V as he contracted dysentery during the siege and died on August 31st, 1422.

King David II of Scotland spent more time in prison or in exile from his throne than he did upon his throne. He took the throne of Scotland at the age of 5 after the death of his father, Robert I. He was crowned with his wife, Joan of the Tower, on November 24, 1331. There was strife within the Kingdom as there were conflicts over David’s regency and Edward Balliol was acting as a pretender to the Scottish throne.

In 1333, David and his wife were sent to France for their safety. He was treated very well by King Philip VI and was given a residence, Chateau Gaillard, where he remained until 1341. He regained his throne and began managing his government. In 1346, bound by the Auld Alliance, he invaded England on behalf of France. King David II did have some initial success at Hexham but it was short-lived.

At the Battle of Neville’s Cross in 1346, David was wounded and his army was defeated. He was taken prisoner and held at the Tower of London. When Edward III returned to France he was moved to Windsor Castle. While he was not treated poorly as an English prisoner he did remain in captivity for eleven years.

In 1357, the Scots’ regency council negotiated a treaty that agreed to a ransom of 100,000 marks for the return of King David II. The ransom was to be paid at a rate of 10,000 marks a year. However, in 1363 it was impossible for the Scots to raise the ransom and King David traveled to England in order to negotiate to leave Scotland to Edward III or one of his sons in order to forgive the ransom. David did this knowing that the Scottish Parliament would never agree to it. He strung out the negotiations with Edward and eventually appeased the matter. When King David II died in 1371, Scotland was strong and more prosperous than anyone could have expected.

King George II was the last of a number of things for British monarchs. He was the last of the British monarchs born outside of Great Britain as he was born in northern Germany in 1683. He took the throne from his father in 1727 and took little control over the domestic policy in Britain. Throughout his reign, he hungered for war in Europe but his ministers were much more cautious towards war.

In 1739, George II was happy when hostilities with the Spanish flared up again and allowed him to focus on war rather than the death of his wife and his conflicts with his son. The War of Jenkins’ Ear merged with the War of Austrian Succession after the death of the Holy Roman Emperor Charles VI in 1740. There was a dispute over whether or not Charles’ daughter Maria Theresa had the right to inherit his Austrian territories.

There was a pro-war faction in Parliament that rose up in 1742, believed that the failure of Maria Theresa to come to power would mean more power to the French. Therefore, George agreed to send 12,000 hired mercenaries to Europe to fight on behalf of Maria Theresa. He placed the men in Hanover in order to prevent any French troops from marching on the electorate. The army which had not fought in 20 years was suffering from great neglect.

At the Battle of Dettingen an allied force of Austrian, British, Dutch, Hanoverian and Hessian troops fought against the French. George personally accompanied the men and led them to victory, becoming the last British monarch to ever led troops into battle. After that battle, he left the fighting to his sons and his military advisors. A move that likely helped him live until the age of 77 which was longer than any of his English or British predecessors.

Ancient Origins – John of Bohemia: A Heroic King Blind to His Fate