Spies, Satellites, and Paranoia: 5 Political Scandals of the 1950s 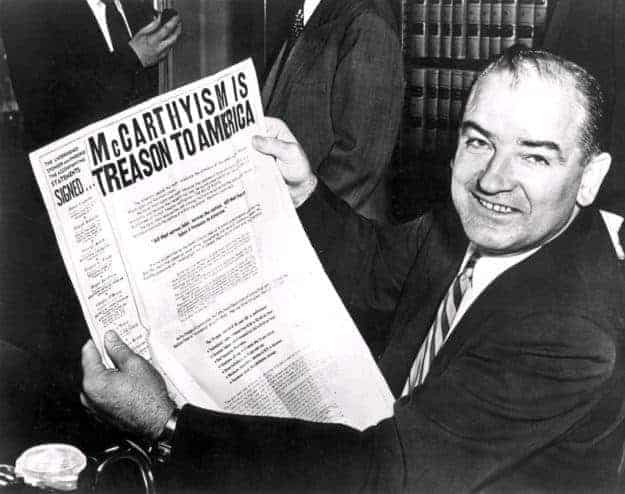 Spies, Satellites, and Paranoia: 5 Political Scandals of the 1950s

The 1950s were a time of many booms (baby booms, real-estate booms, economic booms), but they were also a time of scandal. While it felt like a great time to be alive for many Americans, politics and world events were rife with conflict. We take a look back at some of the greatest scandals that rocked the decade and helped shape post-war America.

1. The Near-Collapse of The IRS

As a result of investigation into IRS misconduct in the 1950s, more than 125 IRS officers were laid off and the giant government organization almost got dismantled. Several things launched Congress to re-organize the mammoth tax-collection organization. Just two examples included that officials in San Francisco were doing business with criminals, and the head tax collector in St. Louis represented a client in a tax matter against the bureau, while still holding office in the bureau.

In the 1950s and even into the 1960s, the IRS cooperated with the FBI and often audited civil rights leaders, members of the NAACP, and the American Communist Party. Additional presidents years later have also been accused of conducting unfair audits.

President Truman most publicly took the fall for the corruption and was instrumental in the IRS firings and re-organization of the group. To this day, many election cycles see the familiar pattern of distrust of the IRS that has its roots in the 1950s.

Television was still new in the 1950s. Near the end of the decade, the new medium lost its innocence due to major quiz show scandals, where contestants were given answers in advance. A formal congressional subcommittee investigation began in summer 1959.

As a result of the investigation, Congress amended the Communications Act of 1934 to prohibit the fixing of quiz shows. This resulted in many networks canceling their game shows and shifting to more public service-oriented programs. The ones that remained also capped their prize winnings.

After a huge, scripted, loss on national television, the loser of the game show Twenty One reached out to the FCC with a formal complaint. Even President Eisenhower commented on the matter: “a terrible thing to do to the American people.” Contestants on both sides of the “fixing” had to testify before Congress.

What resulted was a major overhaul of FCC regulations. The FCC could now require license renewals of less than the legally required three years if the agency believed it would be in the public interest. Giving gifts to FCC members was now prohibited, and was also declared illegal for any contest or game with the intent to deceive the audience.

3. The Execution of the Rosenbergs

Julius and Ethel Rosenberg were U.S. citizens who were executed for committing espionage for the Soviet Union. They were instrumental in giving the USSR information about atomic weapons. For many decades, people defended them as victims of Cold War paranoia.

The Rosenberg’s children worked tirelessly to clear their mother’s name, claiming she did not know the full extent of Julius’s work with the Soviet Union. The consensus among historians is that the couple were indeed guilty, but that their trial was marred by legal improprieties.

Julius joined the Army Signal Corps as an engineer but was later fired when it was discovered he was a member of the Communist party. It was later discovered that Julius shared thousands of documents with the Soviets.

The major controversy of this case was Ethel Rosenberg. It was thought that the case against her was very weak. Primary testimony from David and Ruth Greenglass changed halfway through the case to more deeply incriminate Ethel. Ethel and Julius were also pressured to name more people who were also spies. Aside from some major legal errors in the trial, the pair were executed on June 19, 1953, at Sing Sing Prison in New York.

4. Sputnik and the Space Race

On October 4, 1957, the Soviet satellite Sputnik successfully orbited the earth and triggered the space race and a new era in the Cold War. It also triggered an amazing era of science and invention and the U.S. and the Soviets competed to put a man in space.

In response to Sputnik, U.S. President Dwight Eisenhower announced that the U.S. would launch their own satellite. Nonetheless, the Soviets beat the Americans to it, even though Sputnik came very close to failure. A fuel regulator in the booster failed 16 seconds into launch. The flight control system had to compensate by rapidly moving the vernier engines and stabilizer fins.

In the end, Sputnik succeed and sent a visual message loud and clear, as it could be seen from earth. Anyone with a short wave radio could also hear the satellite, and many recorded it. The USSR was very open about their plans for the satellite, but few Americans paid attention until the actual launch. Project Moonlight helped alert people as to when and how to view it.

Sputnik’s launch spread both fear and amazement around the world. The success of Sputnik was later used for Soviet propaganda in the 1960s as the race to the moon consumed both the U.S. and the Soviet Union.

McCarthyism, also known as the Second Red Scare, was rampant in the 1950s. It technically lasted from 1947 to 1956 and is now considered a form of political oppression. In 1947, President Truman passed an executive order that all federal employees had to be screened for “loyalty.” If they were found disloyal they were often thought to be subversive or members of the Communist Party.

This Executive Order opened doors to broader attacks on character and patriotism, and during the era, thousands of people were accused of being Communists. The time period is named for Senator Joseph McCarthy as he often conducted hearings himself.

Notable hearings of the time include the Hollywood blacklist, the House Un-American Activities Committee, and numerous investigations into members of the FBI. Several factors helped McCarthyism get a boost in the 1950s. Many conservatives were unhappy with Roosevelt’s New Deal and felt that it included socialist-leaning policies. Soviet espionage activity was at an all-time high, and when McCarthy himself produced a list of what he called “known Communists” the wheels were set in motion.

McCarthyism began to fall as American sentiment began to change. When John Henry Faulk, a popular comedic radio host, was fired by CBS, he fought back and won. The liberal-leaning Supreme Court at the time was also consistently ruling against McCarthyism and helped overturn the convictions of fourteen communists. Nonetheless, McCarthyism is ingrained in American popular culture and the term is often bandied about in reference to government whistleblowers of the present day.