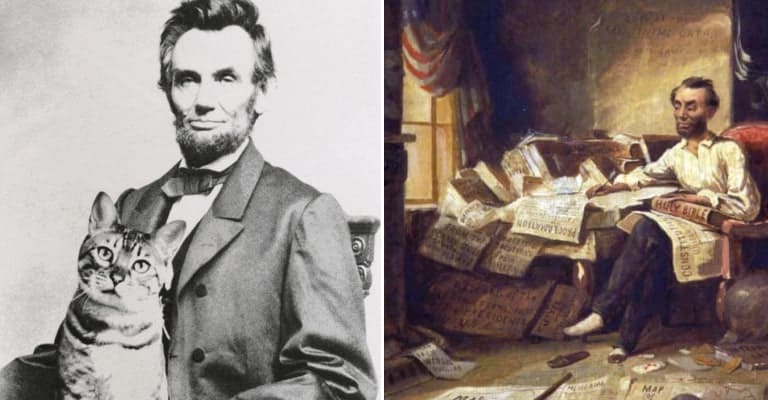 9. Lincoln Did Not Attend His Father’s Funeral

Thomas Lincoln, Abraham’s father, passed away on January 17, 1851, in Coles County, Illinois. The funeral was to be a few days later, and while Lincoln heard, he refused to attend. Furthermore, Lincoln would not help pay for a headstone for his father nor did he see Thomas was he was on his deathbed. While some people believe Lincoln did not attend his father’s funeral because of their strained relationship, others feel it was because Lincoln was dealing with severe depression at the time and could not bring himself to go to the funeral.

Abraham Lincoln was not only the tallest President of the United States of America in its history, but he is also the president with the biggest shoe size. Lincoln’s shoe size was a size 14. About a year before he died, Abraham Lincoln went to Kahler to get shoes specially made for him. In the drawing, it shows that Lincoln had a size 14 shoe. On top of that, there is a pair of goat slippers worn by Lincoln that is sometimes on display at the President Lincoln Cottage.

7. Lincoln Did Not Smoke Or Chew

Abraham Lincoln was known to be a straightforward man throughout his whole life, even once he became president and resided in the White House. Lincoln often chose quiet nights, where the family would sit and read or play games. Lincoln was also known to be a simple man in he never drank alcohol at the White House, and possibly stopped drinking completely later in life. On top of this, Lincoln also did not smoke or chew tobacco.

6. Some of Lincoln’s Favorite Foods Were Fruit

As stated before, Abraham Lincoln was a simple man, and this style followed him to his choices of food. While Mary, Lincoln’s wife, often said that she had trouble getting him to remember to eat, the meals she learned he loved were always around, no matter where he was living. His favorite food was known to be fruit. However, Lincoln also had many other favorite foods, such as oysters, cheese, crackers, biscuits, apple pie, and Chicken Fricassee.

On November 7, 1876, Big Jim” Kinealy and his crew decided to act out a plan where they would break into Lincoln’s tomb and steal his corpse. Of course, the vault securely locked, so the men had to use many tools to break in. They were going to take the coffin away in a horse and buggy. When Kinealy told one of his men, Swegles, to bring the horse and buggy, Swegles alerted the police instead. The police arrested the men and Lincoln’s only surviving son, Robert, hired the best lawyer to try the men and then buried his father.