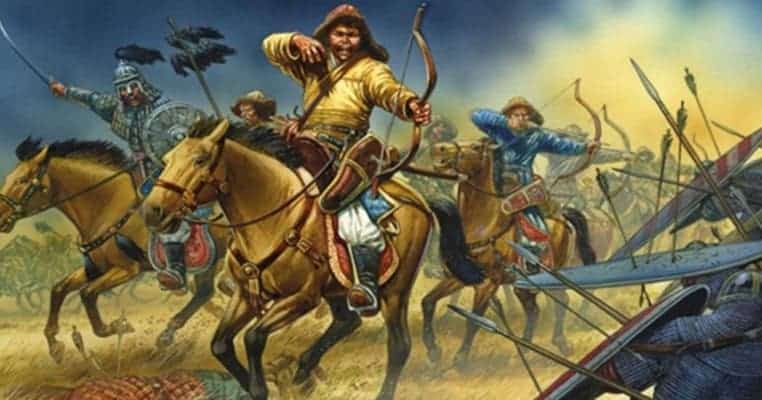 Centuries later, Napoleon Bonaparte adopted a similar methodology of advancing on a broad front, with separate army corps, each of them strong enough to operate independently and handle any opposition short of a sizeable army. Making their own way, Napoleon’s corps advanced like the outstretched fingers of a hand. If and when one of them made contact with the main enemy force, it would engage in order to fix it in place, or otherwise maintain contact. In the meanwhile, the remaining corps would rush in and concentrate upon their sister corps in contact with the enemy, and what had been a widespread advance resembling outstretched fingers would transform into a clenched fist.

Genghis Khan and the lieutenants he trained were not conservative when it came to warfare. Having already revolutionized Steppe warfare and discarded many of the olden tribal ways of fighting, Genghis was not particularly wedded to any traditions. He and his subordinates were instead open minded and receptive to adopting the military techniques of others, provided they were effective. For example, the Steppe had no tradition of siege warfare, yet the Mongols successfully besieged and captured numerous cities by employing Chinese, Persian, Arab, and European specialists. Within a generation, the Mongols became the greatest practitioners of siege warfare since the ancient Romans.

Genghis Khan transformed the Steppe nomads from tribal warrior bands, into a disciplined professional army. He built on the inherent strengths of the nomads – toughness, excellent horsemanship, and martial skills such as archery. When those strengths were combined with professionalism and discipline, the Steppe nomads became a fearsome war machine that had no equal anywhere in the world during Genghis’ lifetime. Indeed, his military’s discipline and professionalism rivaled that of the Roman legions, and would not be matched until the modern era.

15. Genghis Began His Conquests With China

Genghis kicked off his quest to conquer the world by invading China, which was fragmented at the time into various dynasties. His first victims were the Western Xia Dynasty, whom he defeated and reduced to vassals by 1210. Next on his menu were the more powerful Jin Dynasty, whom he attacked in 1211. After a decisive Mongol victory in which hundreds of thousands of enemy troops were massacred, Genghis captured and sacked the Jin capital in 1215. The Jin emperor fled, and abandoned northern China to Genghis Khan.

Genghis Khan’s victories left him in charge of conquered territories that included tens of millions of Chinese peasants. He did not know what to do with them, so he decided to kill them all, and let their farmlands revert to grasslands that could serve as pasturage for the Mongols’ herds. The Chinese were spared that genocide after Genghis’ advisors explained the concept of taxation to him, and he came to realize that many live peasants working the fields and paying regular taxes would produce great wealth for him.

13. Genghis Wiped Out an Empire to Avenge an Insult

Genghis’ campaigning in China was interrupted by a diplomatic incident that led to far reaching consequences. It was triggered when a governor in the powerful Khwarezmian Empire to the west executed Mongol envoys sent by Genghis to its emir. The emir then committed one of history’s greatest mistakes, when he scornfully refused to hand over the offending governor. So Genghis launched an invasion of Khwarezim in 1218, that overran and extinguished it by 1221. Its fleeing emir was relentlessly chased across his steadily dwindling domain, until he died, abandoned and exhausted, on a small Caspian island as Genghis’ men closed in.

12. Genghis’ Reputation For Savagery Was Earned in the Khwarezmian Campaign

Genghis’ conduct during the Khwarezmian campaign cemented his reputation for savagery. Thousands of captives were marched ahead of Mongol armies as human shields. Millions died, as Genghis had entire cities massacred for offering the least resistance. After the capture of an enemy city, the cry “feed the horses!” signaled the Mongols to fall upon and rape, murder, and plunder. When operating deep in enemy territory, Genghis preferred to leave no enemies or potential enemies behind, and making few distinctions between combatants and noncombatants, frequently ordered the killing of all who were encountered.

11. Genghis Was a Cold Blooded Killer

Genghis was chillingly methodical in his atrocities. He did not torture or unnecessarily abuse his victims, but had them killed quickly. Specific units were given the task of butchery, soldiers were assigned quotas of victims to kill, and the massacres were carried out swiftly. In short order, Genghis reduced Khwarezm from a prosperous empire to a depopulated wasteland. At the central mosque in the once thriving but now smoldering Khwarezmian city of Bukhara, he told the survivors that he was the Flail of God, and that: “If you had not committed great sins, God would not have inflicted a punishment like me upon you“.

10. Genghis Committed His Greatest Atrocities Against the Western Xia

Genghis had reduced the Western Xia in China to vassalage in 1210, and for nearly a decade, they served him, assisting against the Jin and other enemies. However, when war broke out between Genghis and the Khwarezmians, the Western Xia took the opportunity to renounce their vassalage and ally with the other Chinese. Genghis responded to the betrayal by invading the Western Xia again in 1225, this time with the aim of exterminating them. He conducted a genocidal campaign, in which he systematically reduced and destroyed their cities, while massacring both the urban and rural populations.

9. Somewhat Aptly, Genghis Died In the Midst of a Genocidal Campaign

After two years’ of campaigning in Western Xia, during which his men carried out a series of massive massacres, each with victims numbering in the hundreds of thousands, Genghis’ quest to conquer the world ended when he fell off a horse in 1227, and died of his injuries. His death did not save the Western Xia: the Mongols continued the campaign, with redoubled ferocity in honor of their deceased leader. Today, the Western Xia are almost unknown beyond a small circle of academics, precisely because Genghis’ campaign to annihilate them was so successful.

By the time he died, Genghis had conquered an empire stretching from the Sea of Japan in the east to the Caspian Sea in the west, and from the Siberian forests in the north down to Persia and Afghanistan in the south. The Mongol expansion did not stop with his death, however, as Genghis had left behind a formidable army, and capable military commanders whom he trained into getting the most out of the Mongol forces. The military machine forged by Genghis kept on conquering for decades after its creator’s demise.

Genghis was succeeded by his son, Ogedei, who was not his father’s military equal, but who was wise enough to know that he was not. From his capital in Mongolia, Ogedei directed simultaneous campaigns on multiple fronts that were separated by thousands of miles. He entrusted their execution to his father’s capable generals, whom he authorized to act independently within their theaters, subject to Ogedei’s orders, which were relayed via a swift horse relay communications network. By the time Ogedei died in 1241, the empire had reached its furthest southward extent, into southeast Asia, and westward all the way to the outskirts of Vienna.

Genghis Khan’s grandson Kublai Khan (1215 – 1294) completed the conquest of China, and founded the Yuan Dynasty, which unified China under a single ruler for the first time in centuries. By then, the Mongol conquests had been divided amongst Genghis’ descendants into separate khanates, all of which owed allegiance to Kublai Khan. His writ thus extended across history’s greatest contiguous land empire, stretching from the Pacific in the east to the Carpathian Mountains in the west.

5. The Fragmentation and Collapse of Genghis’ Empire

Although the various Mongol khanates owed nominal allegiance to Kublai Khan, they increasingly acted as independent entities, and took to warring amongst themselves. Kublai Khan, who was more focused on ruling his own realm in China – which was wealthier than all the other Mongol khanates put together – did little to interfere. He had come to appreciate the benefits of civilization, and decided to leave his roughneck relatives to deal with each other in their roughneck ways, so long as they did so far away.

By historical standards, Genghis Khan’s empire did not last long. Within two generations of his death, his descendants had fallen amongst themselves, and fragmented the great conqueror’s realm into rival khanates. By 1368, the greatest of those khanates, the Yuan Dynasty of China, had fallen, and Genghis’ empire had largely vanished. However, the world was due to experience a final great violent spasm from the Steppe, when Tamerlane (1336 – 1405), claiming descent from Genghis, sought to revive his empire. His rampage was, if anything, even bloodier than the Great Khan’s.