30 Eye-Opening Facts About Average Life During The Great Depression 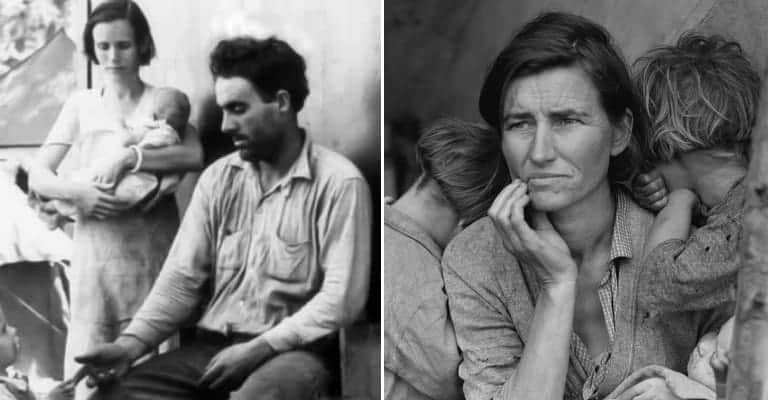 30 Eye-Opening Facts About Average Life During The Great Depression

7. However, Perhaps You Were Not Affected

As much as 40% of the country was not affected by the Great Depression, and some businesses benefited. Oil tycoons in particular, such as John D. Rockefeller and Andrew Carnegie, and their offspring were able to capitalize on the economic woes of others and thereby expand their businesses.

By 1936, the economic reforms implemented by FDR’s New Deal had turned the country around so much that the economic indicators, such as employment, were at the same level as they were before the Depression. He scaled back government spending, and the country fell back into decline.

5. Maybe You Went on Strike

There were challenges working people faced during the Great Depression, to say the least; those years were some of the essential reasons for the development of workers’ rights. Workers successfully managed to organize strikes and gain power through unions. Many laws were changed as Americans came to realize that workers were the strength of a democratic government.

Economic woes are one of the biggest reasons people turn to radical political ideologies. In 1929, Josef Stalin predicted that the communist party in the USA would lead a revolt to overturn the government. He was almost right – many people turned to communist ideology, thinking that it would reverse the Great Depression.

3. You Probably Pulled All Your Money Out of the Bank

In the weeks following the 1929 crash, people who were desperate to retain whatever money they had left withdrew all of their funds out of their banks. Economic analysts suggest that rather than the crash causing the depression, it was actually the runs on the banks that created it.

During the Roaring Twenties, women frequently wore expensive, glitzy dresses that showed off their wealth. During the Depression, though, fashions changed to accommodate those who no longer had any money. Accessories became important in the fashion industry during this time because people could dress up otherwise plain clothes for less money.

1. Maybe You Picked Cotton Like Johnny Cash and Others

Johnny Cash grew up in Arkansas during the Great Depression and recalled picking cotton from the time he was only five years old. Music was his favorite escape from the hardships of life during the time; he and his siblings often sang while they were working out in the fields.

“The Great Depression in Washington State.” University of Washington.