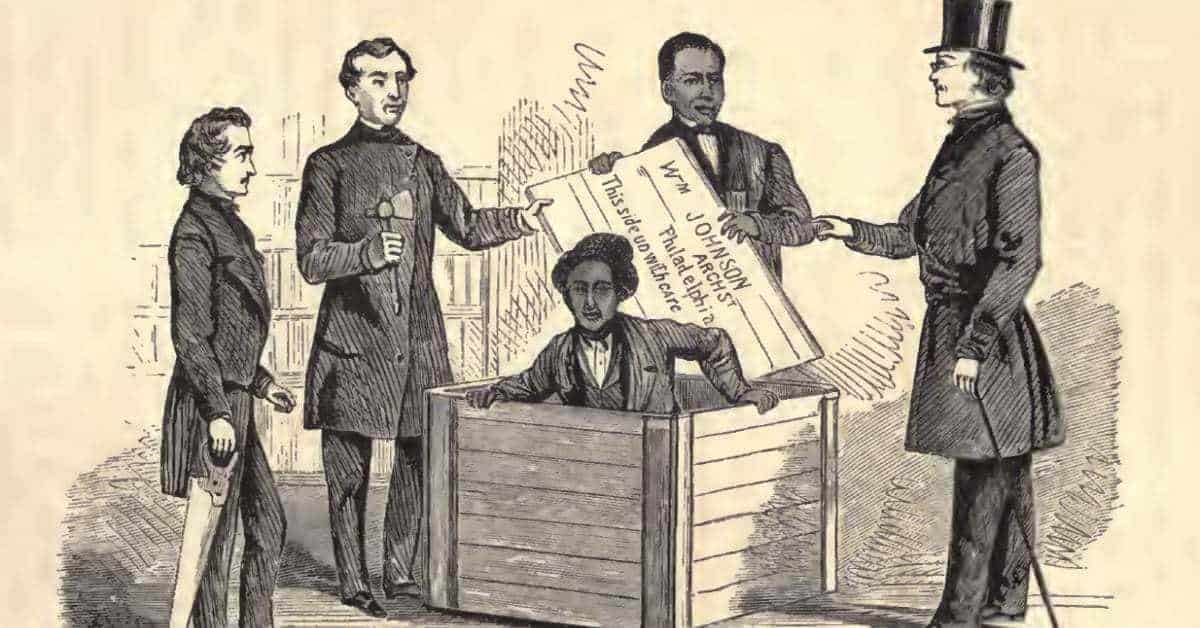 Given the nature of his remarkable escape, it is hardly a surprise to learn that Henry â€˜Box’ Brown became a magician later in his life. Brown was a slave in Virginia until 1849 when he arranged to have himself mailed to Philadelphia abolitionists. He demonstrated his desire for freedom by remaining perfectly still inside the tiny crate on his incredible 27-hour journey. Brown received his obvious moniker after that and became one of the most important speakers for the Anti-Slavery Society. Read on to learn more about this remarkable man and his daring escape.

Henry Brown was born into slavery in Virginia’s Louisa County in a plantation named Hermitage in 1815. He said his master was â€˜uncommonly kind’ but also noted that the slave owner didn’t try to change the fact that the slaves viewed him as Almighty God and the young master was Jesus Christ.

Kindness or not, nothing got in the way of business. Brown was sent to Richmond in 1830 while his parents remained in Hermitage. He was brought to work in a tobacco manufactory owned by his master’s son in Richmond and Brown was living in the city at the time of Nat Turner’s Rebellion in 1831; the famous uprising took place in neighboring Southampton County.

According to Brown, slaves were “whipped, hung and cut down with swords in the streets.” He also noticed that the white residents of the region were “terrified beyond measure.” Brown pointed out that the revolt led to a new law being enacted; five slaves were forbidden to meet one another unless it was for work. During his time at Richmond, Brown had overseers that ranged from being decent men to those who were utterly sadistic in their treatment of the slaves.

Along with 120 other slaves and 30 free black employees, Brown had to work 14 hours a day in summer and 16 hours a day in winter. During his time in Richmond, Brown fell in love with a fellow slave named Nancy. They got married and had three children. Brown lamented the fact that his children suffered the same fate as him; they were born into slavery with no say in the matter and no rights. He was also fearful that the children would be sold; much like he was separated from his parents at a relatively young age.

Brown decided to try and keep his family intact by paying his wife’s master not to sell his family. However, he learned that the word of a slave owner was worthless and the cruel individual sold his three children and Nancy to another slaveholder in 1848. To make matters worse, Nancy was pregnant with her fourth child. Brown was forced to stand idly by as his wife and children formed part of a group of 350 slaves that marched by him in chains. Brown was disconsolate and spent several months mourning his loss. Finally, he resolved to break free from slavery and hatched an ingenious plot.

Brown told his tale of sorrow to a free black man named James Smith and a white shoemaker named Samuel Smith. According to Brown, he paid his master $25 a month to try and prevent the sale of Nancy and his children. However, his master took the money and did nothing; now he would never see his family again.

According to the plan, the Adams Express Company would ship Brown to a free state in a wooden box. Samuel Smith went to the city of Philadelphia to discuss the details with members of the Pennsylvania Anti-Slavery Society. They advised him to mail the box to a man named Passmore Williamson, a Quaker Merchant who was an active member of the Vigilance Committee. Brown paid Smith $86 for his assistance. The last thing to do was conjure up an excuse for missing work.

It was a painful process because Brown knew it would need to be a severe injury to be allowed skip work. He used sulphuric acid to burn his hand to the bone so one can only imagine the pain he was in when concealed in the box. Brown stepped into a wooden box that was just 3 feet long, 2 feet 8 inches deep and 2 feet wide. It had the label â€˜dry goods’ displayed on it, and it was nailed and tied with straps. Brown’s only source of air was one tiny hole.

The interior of the box was covered with a coarse woolen cloth and Brown’s only supplies were a small container of water and a few biscuits. Remember, he was also nursing an incredibly painful injury. According to Brown, as extreme as his escape method seemed, attaining liberty was worth the risk and only one who has ever been deprived of it could understand.

The journey began on March 23, 1849, and he traveled by different wagons, railroads, ferries, steamboats and a delivery wagon. Although the box was labeled â€˜this side up’ and â€˜handle with care,’ the carriers routinely handled the box roughly or placed it upside down on occasion. It is a testament to his remarkable determination that Brown remained still the entire time to avoid detection. According to Brown, he was: “resolved to conquer or die. I felt my eyes swelling as if they would burst from their sockets.”

At one point on the journey, Brown truly believed he was about to die as he was upside down. Fortunately, two workmen decided to use the box as a place to sit, so they threw it down and sat on it; thus relieving Brown of his unimaginable discomfort.

Finally, after a 27-hour journey from hell, the box was delivered to several members of the Philadelphia Vigilance Committee. Apparently, Brown’s first words upon his release from the box where: “How do you do? Gentlemen.” Then he recited a psalm from the Bible as a means of celebrating his release from captivity. The entire escapade also highlighted the usefulness of the mail service; especially the Adams Express Company which was favored by the abolitionists for its privacy.

Brown as a Freeman

Soon after his arrival in Philadelphia, Brown became an important speaker for the Anti-Slavery Society and was acquainted with another legendary figure who escaped slavery, Frederick Douglass. He received the nickname â€˜Box’ during an anti-slavery convention in Boston in May 1849 and used the name Henry Box Brown thereafter. He published the first edition of his book, Narrative of the Life of Henry Box Brown, in Boston in 1849. The second edition was published in Manchester, England in 1851.

Douglass wasn’t happy that Brown revealed the method of escape because he believed it would have proved useful for other runaways. Samuel Smith tried to free more slaves in Richmond in 1849 but was caught and imprisoned for his troubles. Interestingly, Nancy’s new owner contacted Brown in 1849 and offered to sell him his wife and children. Amazingly, Brown refused, and the embarrassed abolitionist community tried to keep this detail a secret.

Brown briefly partnered with James Smith, and during a lecture circuit, the duo created a moving panorama, a popular form of entertainment at the time. The partnership split up in 1851, in part due to the passing of the Fugitive Slave Law of 1850. According to the law, a federal marshal that did not arrest a runaway slave was fined $1,000, even in so-called â€˜free’ states. It was possible for a person â€˜suspected’ of being a runaway to get arrested without a warrant; nor could they ask for a trial by jury. This wretched law not only resulted in the capture of runaway slaves, but it also punished free men and women.

Brown felt it was safer to move abroad, so he went to live in England soon after the Fugitive Slave Law was enacted. He spent the next 25 or so years touring Britain with his moving panorama show. Brown made speeches all over Britain during his first decade in the country. He met a woman named Jane Floyd and married her in 1855 whereupon they started a family.

At this stage, he received heavy criticism for not taking the opportunity to purchase his first family. At the time of the American Civil War, Brown left the abolitionist circuit completely and focused on making a name for himself in the world of show business. Brown returned to the United States with Floyd and their children in 1875 and earned a living as a Magician. Part of his stage act involved emerging from the original box he had traveled in to earn his freedom.

Brown went as far as Canada during his return, and his last known stage show took place in Ontario on February 26, 1889. It is likely that he continued performing even though there are no written records. Brown died on June 15, 1897, in Toronto. For the first three decades of his life, Henry Brown was beaten down by the yoke of slavery. However, he refused to be broken and resolved to free himself from the peculiar institution. His escape is one of the most remarkable ever completed by any runaway slave.

UCONN – The Slave Who Mailed Himself to Freedom

The Washington Post – A Symbol of Slavery â€” And Survival

The Washington Post – Freedom and Slavery, The â€˜Central Paradox Of American History’