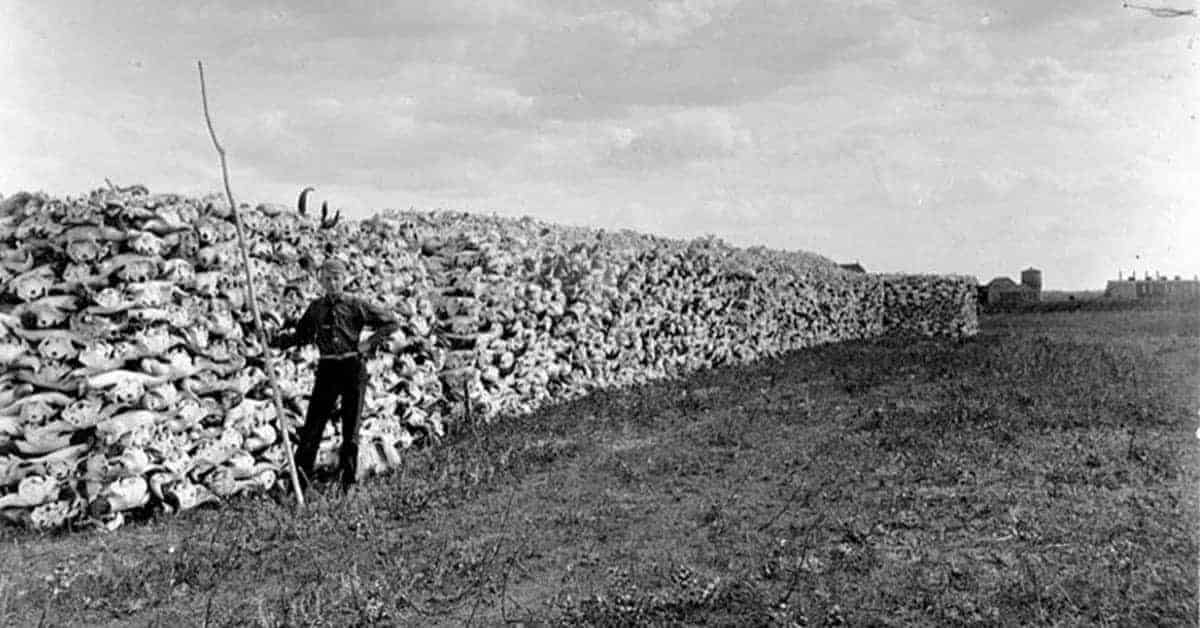 Bison Hunting was an activity fundamental to the economy and society of the Plains Indians people who inhabited the Interior Plains of North America. The species’ dramatic decline was the result of habitat loss due to the expansion of ranching and farming, industrial-scale hunting practiced by non-indigenous hunters, increased demand for bison hides and meat, and deliberate policy by the settler governments to destroy the food source of the Native Americans during the America-Indian Wars.

In the 16th century, North American was home to 25-30 million buffalo. By the late 1880s, less than 100 remained in the wild. The bison were hunted for their skins, with the rest of the carcass left to decay. The bones were then shipped back east.

The US Army sanctioned and actively endorsed the wholesale slaughter of bison herds. The federal government promoted hunting to allow ranchers to range their cattle without competition but primarily to weaken the North American Indian population by taking away their food source to pressure them into moving to the Reservations.

Commercial hunting was the largest detriment to the bison population. An organized team of professional hunters, skinners, gun cleaners, cartridge reloaders, cooks, wranglers, blacksmiths, security guards, and wagons would head out to slaughter for profit. A hide could be sold for $3 in Dodge City, Kansas. A hide with a thick winter coat could sell for $50.

In 1889, an essay in an Overland Monthly and Out West Magazine noted that “thirty years ago millions of the great unwieldy animals existed on this continent. Innumerable droves roamed, comparatively undisturbed and unmolested, . . . Many thousands have been ruthlessly and shamefully slain every season for past twenty years or more by white hunters and tourists merely for their robes, and in sheer wanton sport, and their huge carcasses left to fester and rot, and their bleached skeletons to strew the deserts and lonely plains.”

Today, after significant efforts to preserve the bison population, it is estimated that there are 350,000 buffalo in North America. Most current herds, however, are genetically crossbred with cattle.

Nature – 6 Furry Facts and History about the Iconic American Bison

All About Bison – Bison Timeline

Smithsonian Magazine – Where the Buffalo No Longer Roamed