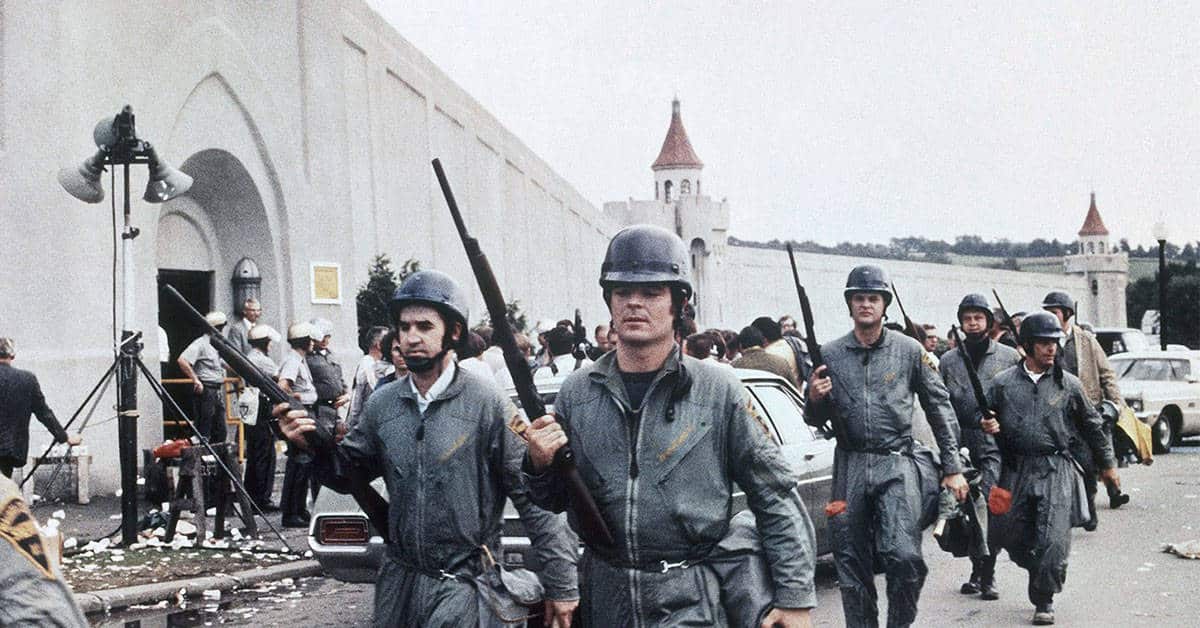 The Attica Prison riot of 1971 took place at Attica Correctional Facility in New York. During morning roll-call on September 9, the 5 Company inmates heard that one of their fellow block-mates was going to be held, isolated in his cell. A group of protesters broke the roll call line to go back to their own cells in solidarity. Rather than remaining in their cells, the group freed the isolated prisoner and they all went to breakfast. When the command staff was alerted of what transpired, they hastily changed the 5 Company schedule. Rather than going outside as they typically would, the inmates and corrections officer (CO) found the door to be locked.

When more COs arrived to bring the prisoners to their cells, an angry inmate assaulted an officer and the riot began. The inmates quickly gained control of the D-yard, two tunnels, and the central control room known as Times Square. The inmates took 42 COs and civilians hostage and produced a list of grievances demanding their conditions be met before ending the rebellion.

Frank “Big Black” Smith, was appointed head of security over the negotiations and kept the hostages and the observers safe. Over the next four days of negotiations, authorities agreed to many of the prisoner’s demands but refused to give amnesty from prosecution for the prison takeover nor was the removal of Attica’s superintendent agreed to. The negotiations were led by 21-year-old inmate, Elliott James “L.D.” Barkley, who would be killed when the prison was retaken.

As a result of all the demands not being met, negotiations broke down and the inmates prepared for battle. Trenches had been dug, metal gates had been electrified, crude battlements were fashioned out of metal tables and dirt, gasoline was put in position to be lit in the event of conflict, and the “Times Square” prison command center was fortified. Governor Nelson Rockefeller ordered the prison to be retaken.

On September 13, tear gas was dropped into the yard and New York State Police troopers opened fire into the smoke. Hostages and Inmates, who were not resisting, were killed. Former Corrections Officers were allowed to participate which a committee, established by Governor Rockefeller to study the protest and aftermath, deemed “inexcusable.”

When the smoke cleared, 10 hostages and 33 inmates had been killed.

NYpost – The True Story of The Attica Prison Riot

The New Yorker – Slaughter in Attica

History – What the Nixon Tapes Reveal About the Attica Prison Uprising