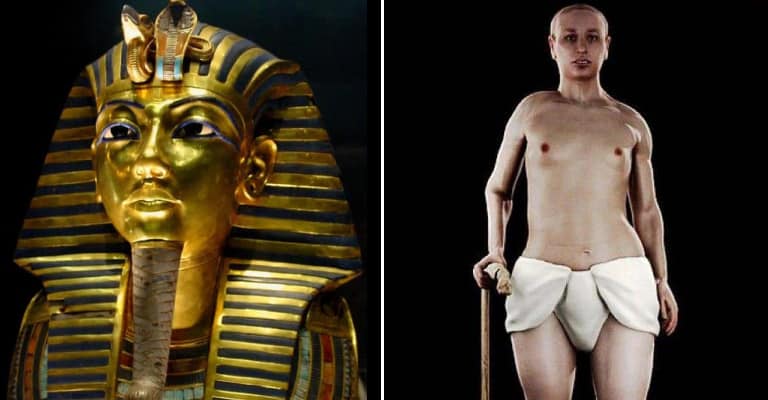 4. Batman Turned Tut Into a Villain

Steve Martin was far from the only entertainer to capitalize on the popularity of the boy king in American culture. The creators of the 1960s Batman series turned him into a villain in one of the episodes. “King Tut” was the Yale Egyptologist, William Omaha McElroy. While at work one day, a student threw a rock during a protest and hit him in the head. When the professor regained consciousness, he was convinced that he was King Tut and that Gotham City was actually his ancient capital city of Thebes on the Nile River.

Professor McElroy, er, King Tut, had a mission to recapture his capital city. He did so by holding the mayor’s daughter for ransom, forcing people to drink a juice made from scarab beetles, and uncovering Batman’s secret identity as Bruce Wayne. Professor McElroy really got into character by lacing his speeches with lessons about Egyptian history and invoking the gods and goddesses in ways that may have been historically done by the ancient Egyptians. His sidekicks included a dim-witted “Nefertiti” who served as the voice of the Sphinx monument in Central Park, and “Cleo Patrick,” who spied on Commissioner Gordon.

Tourism is one of the most important sectors of Egypt’s economy. Every year, millions of people flock to the desert country in North Africa to see relics of its ancient pharaohs, such as the Great Sphinx, the pyramids at Giza, and, of course, the tomb of King Tut. As with many other locales that have seen a lot of tourism at their historic sites, Egypt has noticed that tourism has taken its toll on places like the tomb of King Tut. Moisture from the breath of visitors has caused the paint on the walls to flake off. Cracks in the walls have grown.

To preserve the tomb of King Tut for future generations, as well as for researchers so they can continue to carry out studies on the priceless artifacts there, a conservation team based in Madrid, Spain, spent nearly $700,000 creating a replica tomb. Many of the objects were formed with resin. The replica was so lifelike that some Egyptologists burst into tears upon seeing it. Visitors are now directed to the replica tomb, and the authentic tomb has been closed to all unofficial visits. Perhaps King Tut will once again be able to rest in peace.

2. King Tut’s Tomb May Have a Secret Chamber

Upon its discovery in 1922, Egyptologist Howard Carter knew that he had made the find of a lifetime. Today, the tomb of King Tut has still not yet revealed all of its secrets. A thermographic study of the burial chamber, done in 2015, showed slight temperature variations on one of the walls. The finding suggests that there may be another room on the other side of the room, an idea that is consistent with a theory posited by Nicholas Reeves in 2015 that suggests that Queen Nefertiti may be buried in the same area as King Tut.

If further studies prove that there is, in fact, a secret chamber which actually holds the remains of Queen Nefertiti, researchers may find that the tomb was built for the queen. Nobody has yet found the tomb of Queen Nefertiti, who was the primary wife of King Tut’s father and may have been the boy king’s father. She was one of only two women who is known to have ruled during the New Kingdom. Finding her tomb has long been the holy grail of Egyptology, and Nicholas Reeves that the monument might be hiding in plain sight. Just on the other side of a wall of one of the most visited rooms in the world.

1. The Beard on His Mask Broke Off

King Tut is one of the most iconic figures in all of ancient Egypt, and possibly the most recognizable feature attributed to him is the beard on his gold burial mask. In the year 2014, a group of Egyptians who were handling the cover accidentally broke the beard off of his mask. In the attempt to hide their blunder, they used a plain epoxy adhesive to glue the beard back on. To try to remove some of the adhesive residue, they used sharp instruments, including scalpels. The result was that the priceless beard was scratched.

The team of Egyptian researchers claimed that the beard fell off while they were cleaning it. Others said that it just fell off because it was so old and had been handled so much. Still, they were charged with gross negligence of a national treasure. A German-Egyptian team repaired some of the damage and used beeswax – the adhesive that is customarily used on antiquities – to attach the beard to the mask. Other conservation efforts are in place to help make sure that the priceless treasures of King Tut, now viewed as part of our global heritage, are preserved for future generations to enjoy and appreciate.

“The Tragedy of Queen Ankhesenamun, Sister and Wife of Tutankhamun.” Ancient Origins.