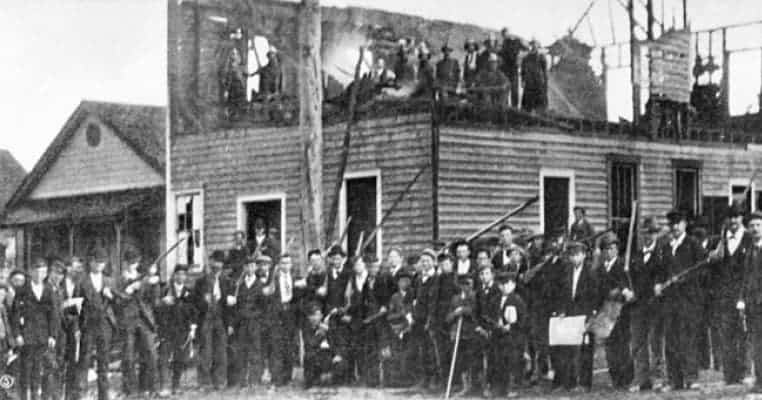 Another incident involving the White League, whose explicit objective was the overthrow of Reconstruction governments and the resurrection of racial slavery, the Election Riot of 1874, also known as the Coup of 1874, saw the paramilitary group seek to overturn the election results. Including members involved in the Colfax Massacre in 1873 – wherein the White League attacked blacks attempting to vote during elections in Louisiana – the group actively disrupted Republican political operations throughout the South. On November 3, 1874, the Alabama chapter attacked poll stations in Eufaula, killing at least seven black voters, injuring dozens more, and driving more than one thousand from the polls.

Continuing on their rampage, the force moved to Spring Hill where they stormed the polling station, destroying ballot boxes and murdering the son of a white judge. Refusing to count any Republican votes, the White League proclaimed a Democratic victory in all the offices of Barbour County. Eliciting no response from the federal government, even as black voters increasingly avoided the polls out of fear of violence, the coup was successful. Two years later, a deal was struck to remove federal troops and end Reconstruction, with repression by white militias only increasing in the aftermath.

6. Ushering into being an era of harsher racial segregation and the disenfranchisement of African-Americans in the American South, the Wilmington Insurrection of 1898 saw white supremacists overthrow democratically elected governments in North Carolina and impose white supremacy

Preceding the Civil War, the city of Wilmington, North Carolina, was home to more than 10,000 African-Americans, a number which grew even further during Reconstruction to a peak of approximately 25,000. Fueling white resentment in the years following the loss of the Civil War, militant white supremacist organizations gradually clawed back the power they had once wielded in an effort to suppress black rights and prosperity. Angered by the prominence of non-whites in public life, in 1897 a new campaign for white supremacy was launched, proclaiming that “North Carolina is a WHITE MAN’S STATE and WHITE MEN will rule it”.

Attempting to defeat the Republican-Fusionist alliance in the 1898 elections, white militias blockaded polling stations and enacted violent voter suppression tactics. Despite this, Wilmington’s government nevertheless remained biracial in composition and opposed to white supremacy. Issuing the “White Declaration of Independence” on November 9, the following day the coalition launched a coup against the elected government. Claiming, falsely, that a black uprising was taking place, the white supremacists forced Republican officials to resign at gunpoint before exiling or lynching said elected officials. Murdering a total of 300 people, black businesses were firebombed whilst in the aftermath legislation was quickly passed disenfranchising non-whites.

5. An ill-fated attempt to resist the draft and overthrow Woodrow Wilson, the Green Corn Rebellion was a short-lived attempt by Oklahoman farmers to oppose America’s entry into World War One

Following the re-election of President Woodrow Wilson, winning his second term with the slogan “He Kept Us Out of War”, just months later Wilson went before Congress on April 6, 1917, to request a declaration of war. Following America’s entry in the First World War, Congress also passed legislation imposing military conscription via a draft system. Opposed heavily by the Socialist Party, as well as working-class unions and farmers, the Selective Draft Act of 1917 hit rural Oklahoma hard. Depleting poor farming communities of desperately needed labor, impoverishing and ruining whole families and towns, hostilities began to flare.

Starting on August 2, 1917, Seminole County Sheriff Frank Grall and Deputy Bill Cross were ambushed by militants. Burning railway bridges and cutting telephone lines, by the following day the movement had expanded into an armed gathering of between eight hundred and one thousand in Southeastern Oklahoma. Consuming green corn as they progressed, the intent was to rally support and march on Washington, overthrowing Wilson, repealing the draft, and ending the war. Concluding anti-climatically, the rebellion was betrayed and its movements reported ahead to the authorities. Easily defeated by a regional militia, its’ were leaders arrested, tried, and imprisoned.

4. A series of armed conflicts lasting for four decades, the Coal Wars was an attempt by coal operators to oppose worker’s rights in their facilities with extreme force including murdering their employees

Occurring chiefly in the Eastern United States, specifically in Appalachia, the Coal Wars were a succession of violent conflicts between 1890 and 1930. Inspired by the perceived economic exploitation of workers by coal operators, who, from the 1870s onward, would routinely hire private detectives to ensure union organizations did not penetrate their sites and encourage worker’s rights, these coal miners at various locations sought to advance protections. Responding with extreme violence, coal operators sought to combat disruptive employees by any means necessary including excessive uses of force against their striking workers.

Of particular note, the Paint Creek-Cabin Creek strike of 1912 saw some of the worst examples of corporate violence inflicted upon American workers. Lasting from April 1912 through July 1913, the demands by employees were not dramatic, amounting to just fifteen cents per worker per day. Unrelenting, the coal companies instead employed professional strikebreakers to end the resistance and fired anyone joining a union. On February 9, 1913, these hired thugs even drove a heavily armored train fitted with a machine gun through the tents of the miners and their families, killing at least fifty and injuring scores more. Ultimately unsuccessful, the legacy of the conflict can be seen even today, with the United States enjoying among the worst employee rights of any developed nation.

3. Fought to prevent the corrupt Crump political machine from continuing to rig elections, the Battle of Athens was won by returning World War Two veterans crusading to retrieve stolen ballot boxes in 1946

One of the many political machines operating throughout the American democratic system during the early 20th century, the E.H. Crump consortium controlled Tennessee politics from the 1920s until the mid-1950s. Personally appointing every Mayor of Memphis between 1915 and 1954, Crump committed countless acts of electoral fraud, corruption, and bribery to maintain an iron grip over almost every aspect of the state. Challenged by the return of approximately 3,000 servicemen after the end of the Second World War, almost ten percent of McMinn County’s population, these veterans argued that “if democracy was good enough to put on the Germans and the Japs, it was good enough for McMinn County, too”.

Forming the GI Non-Partisan League, presenting a slate of candidates and raising money for election oversight, the embattled Crump fought back. Unleashing hundreds of armed law enforcement officers against his opponents during the 1846 elections, seizing ballot boxes and holding them in the county jail whilst attempting to doctor the results, the veterans responded by arming themselves. Assaulting the jail with as many as two thousand men, the former soldiers overran the building and prevented the election from being stolen. Signaling the beginning of the end for the corrupt political consortium, the Battle of Athens marked the entry of American veterans into mainstream U.S. politics.

2. An attempt by nationalists in Puerto Rica to win independence from colonial rule under the United States, the San Juan Revolt of 1950 was an unsuccessful effort to replicate the Thirteen Colonies’ victory against Great Britain

Following the Ponce Massacre in 1937, when, during a peaceful protest march against American governance in Puerto Rico, troops under U.S. command opened fire killing eighteen and wounding two hundred and thirty-five, members of the Puerto Rico Nationalist Party grew increasingly radical in their opposition to American rule over the island. Hoping the United Nations would take notice and intervene, in 1950 the Nationalists organized mass uprisings against the United States. Thwarted by American police, who had learned of their plans and arrested a number of key figures, its leader Albizu Campos was forced to order the revolution to start prematurely on October 27.

With the police opening fire once again upon a caravan of Nationalists without provocation, popular outcry led to a series of attacks throughout Puerto Rica against American targets, in particular La Fortaleza (the Governor’s mansion) and the Federal Court House Building in Old San Juan. Largely failing in their efforts, suffering heavy casualties against superior numbers and failing to seize any important buildings, the final salvo of the 1950 rebellion occurred on November 1, when nationalists Griselio Torresola and Oscar Collazo unsuccessfully attacked Blair House in Washington D.C. with the hope of assassinating President Truman.

1. A revolt launched by inmates of Attica Correctional Facility in 1971, the retaking of the prison saw the deadliest one-day encounter between Americans since the end of the Civil War

Part of the Prisoners’ Rights Movement, the Attica Prison Uprising of 1971 saw inmates at Attica Correctional Facility in Attica, New York, participate in a mass rebellion in protest of brutal conditions and in pursuit of political rights. Involving 1,281 out of the prison’s approximately 2,200 inmates, on September 9, 1971, the prisoner’s took forty-two officers and civilian members of staff hostage. Issuing a list of demands, including adequate medical treatment and fair visitation rights, negotiations were led by twenty-old-year-old Elliott James “L.D.” Barkley. Despite agreeing to twenty-eight reasonable requests, authorities refused to grant amnesty to those involved and talks broke down.

Ordered by Governor Nelson Rockefeller to regain control of the prison by force, at 0946 on September 13 police opened fire. Indiscriminately hitting hostages and inmates, including those not resisting, ten hostages and twenty-nine inmates were killed during the attack, becoming the bloodiest one-day encounter between Americans since the Civil War. Barkley, just days away from his scheduled release, attempted to surrender but was murdered by state police upon recapture. A subsequent report, released to the public in 2013, revealed a long history of inmate abuse, including the torturing of those incarcerated at Attica.

“In Debt to Shays: The Bicentennial of an Agrarian Rebellion”, Robert A. Gross, University of Virginia Press (1993)

“The Armies of the Streets: The New York Draft Riots of 1863”, Adrian Cook, University Press of Kentucky (2014)

“The New York City Draft Riots: Their Significance for American Society and Politics in the Age of the Civil War”, Iver Bernstein, University of Nebraska Press (2010)