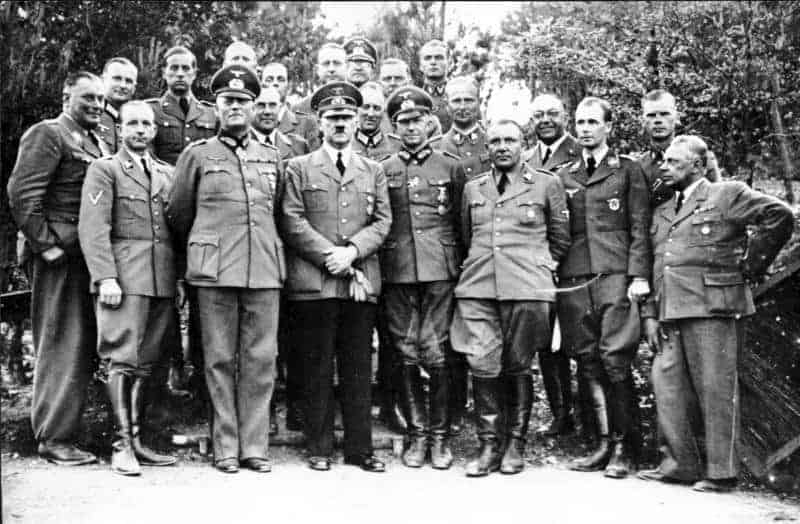 20. Responsible for the deaths of more than 10 million, Heinrich Himmler killed himself after failing to escape at the end of the war

Heinrich Himmler (b. 1900) was Reichsführer of the Nazi SS and one of the chief architects of the Holocaust. Enlisting as an officer candidate with the reserve battalion of the 11th Bavarian Regiment in December 1917, Himmler remained in training during the conclusion of the war and was thus denied the opportunity to become an officer or experience combat. Unsuccessful in his further attempts to pursue a military career and harboring growing anti-Semitic and far-right views, Himmler joined the Nazi Party in 1923 as a member of the paramilitary SA and took part in the failed Munich Putsch.

Joining the SS as an SS-Führer (SS-Leader) in 1925 with the serial number #168, Himmler advanced quickly through the ranks, first as a District Leader and later as a propaganda chief. Developing an extensive bureaucracy collating statistics and information on undesirables, Himmler confided with Hitler his vision for the SS as an elite unit dedicated to racial purity; in response Hitler appointed Himmler Deputy Reichsführer-SS with the rank of SS-Oberführer, rising to the position of Reichsführer-SS in January 1929 upon the resignation of Erhard Heiden. Within his first year as Reichsführer Himmler drastically expanded the SS, increasing its numbers from approximately 290 to over 3,000, and after the Machtergreifung in 1933 had enlarged the organization to 52,000 members. Applicants were vetted according to the requirements of Hitler’s Aryan Herrenvolk (“Aryan master race”), despite Himmler’s own incompatibility with these principles, and in 1931 Himmler introduced his “marriage order” requiring for family trees to prove racial purity within the SS.

Extending his racialist ideology outside the SS, less than three months after the Machtergreifung Himmler established Dachau concentration camp, with the new facility serving a model for all future camps in Germany. Initially incarcerating political opponents, from December 1937 Hitler granted Himmler authority to imprison anyone deemed by the regime to be an undesirable; by the outbreak of the Second World War, Himmler oversaw six camps housing roughly 27,000 inmates.

During World War Two Himmler oversaw the activities of the Nazi death squads in Europe, notably the Einsatzgruppen (SS task forces) collectively responsible for the deaths of at least two million people, commissioned the “Generalplan Ost” (General Plan for the East) which proposed the expulsion or eradication of Slavic populations to create space for Aryan Germans, and was responsible, among other programs, for Operation Reinhard – the plan to exterminate Poland’s Jews. Overall, it is estimated Himmler was complicit or responsible for the deaths of in excess of 14 million people throughout Europe.

In April 1945, with defeat imminent, Himmler sought to negotiate a secret surrender with the Allies, hoping the Americans would assist the remaining German forces in repelling the Red Army. After a BBC report on the evening of April 28 revealed these negotiations, Hitler stripped Himmler of his rank and despite efforts to regain his position under the new Chancellor, Karl Dönitz, Himmler was rebuffed and instead fled into hiding. Captured on May 21, Himmler identified himself to his British captors on May 23 and during a medical examination broke a hidden cyanide capsule concealed in his mouth.

“Psychiatrists: The Men Behind Hitler”, Roeder, Kubillus and Burwell (1994)

“Gauleiter: The Regional Leaders of the Nazi Party and their Deputies, 1925-1945”, Michael Miller and Andreas Schulz, James Bender (2012)

“Himmler and the Final Solution: The Architecht of Genocide”, Richard Breitman, Pimlico (2003)

“Heinrich Himmler: The Sinister Life of the Head of the SS and Gestapo”, Roger Manvell, Heinrich Fraenkel, Greenhill (2007)