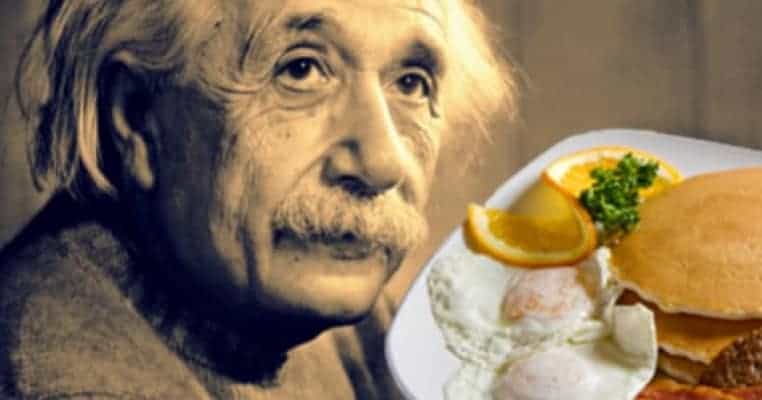 6. Ernest Hemingway Ate With His Cats

Author Ernest Hemingway always woke up at 5:30 AM to a hot cup of coffee. In one of this autobiographies, he wrote that when his son was a baby, he would wake up early to feed his cat, Featherpuss, and then give a bottle to his son. Hemingway loved this routine, because his cat and baby kept him company as he wrote in the morning, before his wife woke up. Later in life, when the number of cats in Hemingway’s life increased, he would eat breakfast with his pack of felines.

One of his favorite meals for breakfast was actually pretty fancy; truffle omelette, Canadian bacon, and tea. He absolutely loved to eat food, and would give very detailed descriptions about his character’s meals when he wrote. This happened so often, someone published a Hemingway Cookbook, with the quotes from his novels. Hemingway was known for having a drinking problem, and he would have a breakfast cocktail like a Bloody Mary now and again to take the edge off of a hangover.

5. Walt Whitman Did The Paleo Diet Before It Was Trendy

Walt Whitman was a writer from New Jersey, reaching world acclaim for his poetry. Whitman had a strange belief that meat was the best thing people could eat, and he thought that it cured a lot of ailments – including acne on people’s skin. He started out every single morning by eating oysters and a rare steak, or any other red meat he could get his hands on. It’s not like people back then were unaware that too much red meat can lead to health problems.

Whitman’s friend and fellow writer, John Burroughs, had this to say about his diet: “I am almost certain you eat too heartily and make too much blood and fat…If not the engine makes too much steam, things become clogged and congested.” Burroughs went on to say that Whitman should probably eat more fruits and grains, but he ignored his friend, and went on with his paleo diet. He lived to be 73 years old, which was an incredibly old age back in the 1800’s, so he couldn’t have been all wrong.

At 22 years old, inventor Thomas Edison was not making any money yet. He was so broke, he wandered into a New York restaurant and offered them a tea bag in his pocket for whatever he could eat. We don’t know why he was carrying around a single tea bag, but the restaurant owner must have taken pity on him, because he gave Edison much more than a tea bag’s worth of food. It was a perfectly hot apple dumpling, and a cup of coffee.

If you have never eaten an apple dumpling, it is an Amish tradition. It is basically a miniature piece of apple pie, except that you have the pie crust wrapping the cinnamon apples in a little ball. Topped with vanilla ice cream, it’s delicious. Thomas Edison never had an apple dumping until then, and he apparently felt so happy and satisfied to have that food, that he decided to start eating apple dumplings and coffee every day for breakfast, even after he became rich and successful.

As the author of The Great Gatsby, it’s really no surprised that F. Scott Fitzgerald and his wife Zelda were known for being party animals. There are dozens of stories about their bad behavior, including riding on top of cars, destroying hotel rooms wherever they went, and staying drunk nearly 24/7. Hotel staff would often complain that there were gin bottles all over their hotel room, and they would make a huge mess. It’s very likely that they may have slept through breakfast and gone straight to lunch or dinner after a particularly rough night.

One weekend, while visiting Princeton University, Zelda ordered “omelette flambées” for breakfast, which is made by pouring applejack liquor onto a raw egg in a pan. It bursts into flames, so it’s essentially making an omelette forged by fire. We think that she did this more so she could see the fire than enjoy the food, because just like everything else in her life, she loved chaos. (And that type of omelette doesn’t even taste that good, if we are being honest.) On a normal day, the couple preferred poached eggs and bacon for breakfas, and whatever else they needed to cure a hangover.

Artist and inventor Leonardo da Vinci is remembered for being one of the greatest minds of all time, and an all-around Renaissance Man. We know that he was either a vegetarian or vegan, because he said; “Truly, man is the king of the beasts, for his brutality exceeds them. We live by the death of others. We are burial places! I have since an early age abjured the use of meat, and the time will come when men will look upon the murder of animals as they look upon the murder of man.”

So, we don’t know exactly what he ate for breakfast. But considering that there were plenty of options in Italy, it would make sense if he ate lots of fruit, or maybe oatmeal. He could have also eaten eggs, if he did not count that as murder. We are not really sure, since he did not document his food in a journal, but considering how busy he was, it’s easy to imagine him grabbing a piece of fruit on the go, instead of stopping to cook.

As a teenager, Steve Jobs was a total hippie who did a lot of meditation and deep thinking. Before he started a computer company in his parent’s garage and came up with the official name for Apple Computer, Steve Jobs would go on vegan fasts. He would only eat one or two whole fruits and vegetables at a time. He would only drink water, and abstained from anything like drugs or alcohol during these fasts.

Two of the most common things he ate during this raw food diet were apples or carrots. Sometimes, he would fast completely without eating anything at all. Every once in a while, he threw in some nuts for protein. Even during his time working as a CEO, he was vegan most of his life, and he said that it helped clear his mind and reduce his body odor. If you haven’t guessed already, this is the main reason why his tech company was called “Apple” computer, aside from the fact that it helped him get in high in alphabetical order in the beginning of the phone book.

Rise and Shine: The Daily Routines of History’s Most Creative Minds. Oliver Burkeman. The Guardian. 2013.

Leonardo Da Vinci and Stroke- Vegetarian Diet as a Possible Cause. PubMed.gov. 2010.

Bacon and Eggs for Every Meal: Absurd Diets of the Rich and Famous. Killian Fox. The Guardian. 2017.

What Did Charles Darwin Put In His Mouth? Pretty Much Everything. Ester Inglis-Arkell. Gizmodo. 2015.