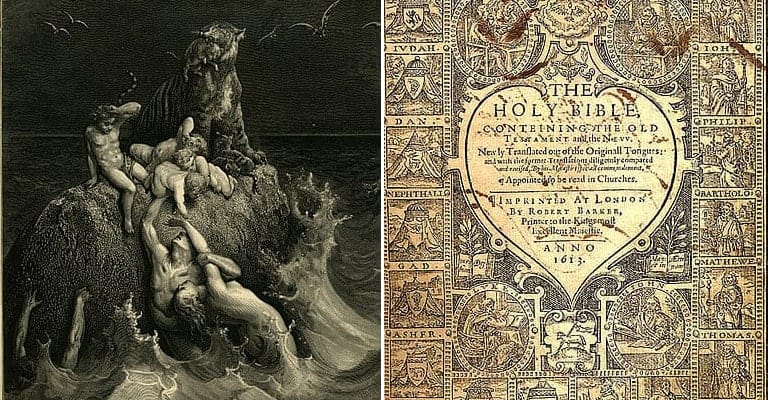 13. Some Protestants argue the King James Version of the Bible has never been altered

Despite the clear records of history and the extant capability of comparing revisions of the King James Bible side-by-side, with the changes easily detectable, there developed a vocal group of supporters who argued that the book remained unchanged through the centuries. In 1930, Benjamin Wilkinson wrote Our Authorized Bible Vindicated. Wilkinson’s thesis was that all other forms of the Bible were corrupt, and that only the King James Version, which he asserted was based on the Textus Receptus, was an accurate English translation of the ancient texts. His work was the basis for the movement which rejects all other translations and revisions of the Bible, the King James Only Movement.

Wilkinson asserted in another book, Truth Triumphant, that the editor and compiler of the Textus Receptus was not Erasmus, as history demonstrates, but rather Lucian of Antioch. The theory of Lucian compiling the work which is the basis of the King James Version in Wilkinson’s belief, as well as those who agree with him, has to date no archaeological or historical evidence to support it. Wilkinson wrote in Truth Triumphant that, “Neither Lucian nor Erasmus, but rather the apostles, wrote the Greek New Testament”. In Wilkinson’s view, Lucian safeguarded the Textus Receptus from the corruption of the documents present in his day from being adopted into the text of what was much later the basis of the KJV, thus the KJV is the only version which accurately reflects the true words of the apostles.

14. Changes to the Bible have been a constant throughout history

Comparison of the ancient texts to each other, regardless of language, are easily verifiable proof that the Bible, regardless of the version being considered, has changed over time. Written, edited, and debated by man, the work has been revised for political, historical, and grammatical reasons throughout its existence. When King James commissioned the version which bears his name, he directed the translating committees (which were called companies) to produce a version which reflected the episcopal Anglican Church and its belief in an ordained clergy. The instruction ensured that the resulting bible would differ in many ways from existing versions.

Despite historical, archaeological, and ecclesiastical studies to the contrary, there remain those who believe that Saint Matthew, one of the original twelve apostles, wrote the Gospel of Matthew, with the other apostles writing the gospels bearing their names. All four of the canonical gospels were written anonymously, appearing late in the first century, and the names assigned to them appeared in the second century. Scholars overwhelmingly believe that none were written by eyewitnesses to the ministry of Jesus, and the earliest copies of them reveal that later copies had additional verses added, indicating that what later became the Bible was revised before it was ever translated from Greek.

15. The oldest texts of Mark do not contain verses which appear in the King James Version of the Bible

In the King James Version’s Gospel of Mark, the resurrected Jesus appears to several people, including his closest followers, known as the disciples. In the oldest extant texts of Mark’s gospel, the story of Jesus appearing to the disciples is not present. The chapters of Mark following the Crucifixion were added sometime in the second or third century, what became in the King James Version Mark 16:9-20. These verses of Mark stand as proof of the Bible’s being changed over the years, even some editions of the King James Version note that the verses are of questionable provenance. Some ancient sources which do include the additional verses contain notes questioning their authenticity.

Another ancient manuscript in Greek, known as Codex W, contains the longer version of Mark, with additional verses in the text which were evidently removed in later versions of the gospel. The version contained in Codex W has never been found in any other versions of Mark. Thus one book of the Bible, The Gospel of Mark, exists in at least three versions in the ancient Greek manuscripts, two of which are revisions which took place long before it was ever translated into English. The Gospel of Mark is the oldest of the canonical gospels, and was influential in the writing of those of both Luke and Matthew. Some scholars postulate that the additions to Mark which led to the longer version were made during the second century to make its ending more in line with Luke and Matthew.

16. Many changes to the Bible were made before it was the Bible

Whether one believes that CERN is supernaturally changing the text of the Bible is immaterial when considering the changes made to the ancient source documents. Studies of the Greek documents from the first millennia demonstrate that numerous changes were made over the centuries. When documents were copied laboriously by hand changes of punctuation and errors of omission were all but inevitable. But changes of addition – the insertion of entirely new verses – were not. They were instead placed in the existing text as editorial or creative additions by unknown authors, forever changing the content of the Bible, many of them centuries before the first editions in the English language. An example of one such addition is present in the Gospel of John.

Copies of the Gospel of John, in Greek, reveal that for its first three centuries in existence there was no mention of the tale of Jesus confronting a crowd about to exact justice upon an adulteress by stoning her. In the story Jesus challenges the crowd, telling them for the one among them, if any, initiating the punishment by casting the first stone. When the crowd disperses Jesus too tells the woman that he will not condemn her. The story is among the most famous verses of the Bible. But it wasn’t in the earliest copies of John’s gospel, appearing more than three hundred years afterward, an insertion by a later copyist. In subsequent ancient texts in Greek, the story appears in a variety of places other than that where it can be currently found, John 7:53 – 8:11.