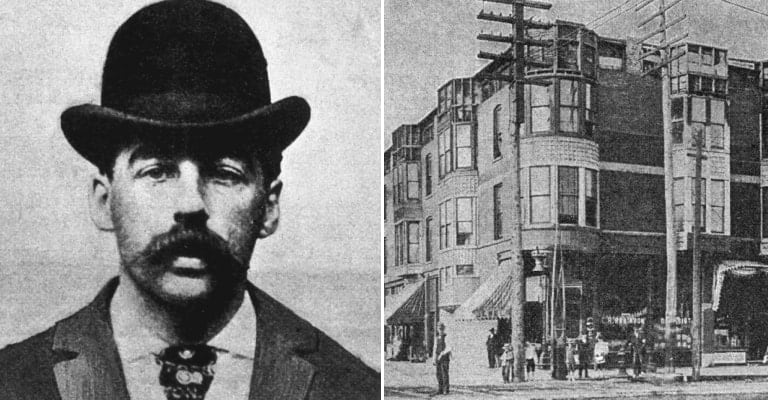 13. The Castle was described in newspapers without evidence

In August of 1893, during the height of the Columbian Exposition the Castle, which Holmes had been advertising as the World’s Fair Hotel, caught fire on its third floor. Holmes had heavily insured the building and its contents with no fewer than four insurance companies, all of which refused to pay his claims, and which sued him for insurance fraud. Fire investigators inspected the building, as did insurance investigators, and none of the later announced murder and torture apparatus claimed to have been in the building were found. It was the pressure of the insurance inspectors and the potential charges of fraud which drove Holmes to leave Chicago for Texas, and which led to his meeting with Hedgepeth and Howe.

Despite the lack of evidence, or perhaps because of it, the newspapers sensationalized the scant findings in the castle. When Holmes stood on the gallows and made his final statement, which refuted that given to Hearst earlier when he accounted for 27 murders, he denied killing anyone other than two women during what he called a criminal medical procedure, which in the late nineteenth century was often a euphemism for an abortion. “I only want to say that the extent of my wrongdoings in the taking of human life consisted in the death of two women, they having died at my hands as the result of criminal operations”, stated Holmes, according to an eyewitness to the execution, and reported in the San Francisco Call. According to the same account, the two women to which Holmes referred were Emily Cigrand and Julia Smythe Connor.

14. The truth about the Castle’s secret rooms

H. H. Holmes did indeed have numerous secret rooms and concealed passages built in the Castle, which were reported in the city of Chicago in March of 1893, before the opening of the Columbian Exposition, by the Chicago Tribune. Holmes furnished his rooms on credit, did not pay his creditors, and hid the furnishings, as well as cash, from them when they came to collect what they were owed or repossess. It was some of these mortgaged furnishings which he sold, leading to his arrest in St. Louis, removing them from the Castle before the 1893 fire destroyed a portion of the third floor. The first floor of the Castle housed retail businesses, which by their nature have numerous visitors throughout the course of the business day, which included Saturdays in the 1890s.

The main purpose of the Castle was to bilk investors and lenders, and the evidence that Holmes did so repeatedly is undeniable. He was sued in Chicago courts more than 50 times, which were well reported in the Chicago newspapers, as were the frequent visits of the police to the Castle, accompanying bill collectors to enforce court orders. Following the Columbian Exposition some newspapers claimed, without supporting evidence, that more than fifty women had been traced from attendance at the exposition to the Castle, from which they vanished from sight forever. But the police found no evidence of them. What they did find, such as a length of rope, became evidence that Holmes had hanged some of his victims, gas lines became designed for asphyxiation in airless rooms, rather than the source of illumination as they were in most houses, in the fevered imaginations of the reporters of the day. A wood stove for heat became a crematorium.

15. How some of the myths began

When Holmes built the first two stories of the Castle he changed builders frequently. This was later reported to be a necessity in order for him to keep the murderous intent of his house of horrors from being known to anyone. The allegation makes little sense, since the more contractors who entered the building the more were aware of the unusual layout of the rooms and hallways. Holmes had to frequently change contractors because he didn’t pay them for their work. For the same reason he was forced to often change suppliers, as his credit ran out and his bills remained unpaid. Far from being a stoutly built prison, the building was shoddily completed, with one worker once putting his foot through the roof when he arrived to make some repairs.

The bodies of the victims he allegedly killed in the Castle were supposedly sold to medical schools and other doctors for the study of anatomy, according to some, or were burned in the woodstove in the basement, a virtual impossibility. It is also a myth that the Castle burned to the ground in August of 1895 (or any other year). It was damaged by fire and repaired, remaining in use until the 1930s, when it was torn down. It was during the building’s demolition that many of the pulp magazine stories about Holmes and the Murder Castle re-emerged, and also during that period that most of the extant photographs of the building were taken. The descriptions of the media which were unsupported by evidence when written forty years earlier were repeated, usually with substantial embellishment. They continue to be repeated and embellished in the twenty-first century.

On Sunday, April 12, 1896 a facsimile of a handwritten note appeared on the front page of the New York Journal. The note read, “To the New York Journal: I positively and emphatically deny the assertions that any confession has been made by me except one and which is the only one that will be made(.) The original confession is the one given to the New York Journal. It alone is genuine all others are untrue. Signed H H Holmes April 11 1896.” His confession, in which he claimed to have murdered 27 people, appeared in the same edition of the newspaper. As has been noted earlier, some of the people he claimed to have killed were later established to still be alive, despite his claims of the confession being “genuine”.

Throughout the confession Holmes wrote of the defects of character which he had developed, and that they were easily discernible in his countenance, having caused physical changes to his face. He wrote of killing for “pecuniary gain” and that as his murders piled up he developed “the light regard I had for the lives of my fellow beings”. Holmes wrote of killing one of his male victims by starving him almost to death before needing the room in which he was held, “for another purpose and because his pleadings had become almost unbearable, I ended his life”. Holmes also described victims selected for the purpose of extorting their money, starving and gassing them over a period of time before they signed over securities and accounts to him, after which he finished them off and sold their bodies to medical schools. The chilling nature of his narrative sold well, and despite it being self-described as true, he later renounced the entire tale.

17. The Philadelphia Inquirer confession was contradicted

The confession which Holmes provided to the New York Journal, accompanied with the handwritten note which was reproduced on the front page, was not, as he claimed, the only confession he provided to the newspapers, if the newspapers of the day are to be believed. His first confession was to the Philadelphia Inquirer, the leading newspaper of the city where he was tried for the murder of his former partner, convicted, and sentenced to death. In it he claimed to have killed 27 people, and gave a mostly chronological (some were listed out of order, according to Holmes) listing of the victims and the circumstances of their deaths, including in some cases the money which he made from the killings. In some instances the victims were unnamed, with Holmes claiming that he simply couldn’t remember the name of the persons he had killed.

In some reproductions of the confessions, Holmes was quoted as saying, “I was born with the devil in me”, which did not appear in all newspapers which ran portions of the statements he gave. Whether Holmes uttered the words which explain his becoming a serial killer through the impetus of Satan has been debated ever since, as have so much of his life and his crimes. At the time of his execution, Holmes again recanted, denying his guilt in any killings. Holmes gave his final statement, according to his own words, because, “by not speaking I may be made to acquiesce in my execution”. After his execution, rumors began almost immediately that he had somehow managed to escape, and that the man buried outside Philadelphia had been another cadaver. The rumors led to his body being exhumed and tested for DNA evidence in 2017.

18. There are those who believe he was Jack the Ripper

H. H. Holmes has been mythologized by those to whom he has become a cottage industry, with longstanding rumors that he escaped the gallows and fled to South America, and even that he was the perpetrator of the Whitechapel murders assigned to the killer known as Jack the Ripper. As early as 1898, newspapers reported that Holmes had bribed the jailers who carried his living body out of prison in a coffin, after which he vanished. The rumors were based, in part, on Holmes being buried ten feet underground, sealed in concrete. A story in an 1898 edition of the Chicago Inter-Ocean claimed that Holmes was alive and living in Paraguay, earning a living as a coffee grower. The exhumation of the body and confirmation that it was in fact Holmes (through dental records) did little to end the speculation.

The truth about H. H. Holmes is forever obscured by the sensationalist manner in which he was described by the newspapers of the time, by his own contradictory statements, and by the continuing efforts to link him to crimes around the world. His name makes money through mystery tours, blogs, books, television specials, and films. Understanding that first and foremost he was a swindler and a liar, who killed primarily for profit, and who sold his story for profit, is important to his story. His alleged memoir, Holmes Own Story, said to have been written in prison, expresses his complete denial of involvement in the murder of his partner, the crime for which he was executed. Holmes was not America’s first or worst serial killer. But he was a murderer without conscience. “The legend of the Devil in the White City is effectively a new American tall tale”, wrote Adam Selzer, after researching the Holmes legend for years. “And like all the best tall tales, it sprang from a kernel of truth”.

“Trials of the Century: An Encyclopedia of Popular Culture and the Law”. Scott Patrick Johnson. 2011

“The Holmes – Pitezel Case; A History of the Greatest Crime of the Century”. Detective Frank P. Geyer. 1896