17 Popes Who Didn't Practice What They Preached

17 Popes Who Didn’t Practice What They Preached 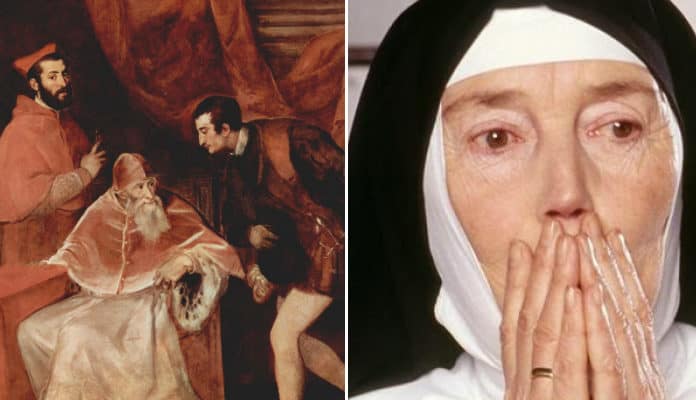 For the first one thousand years of the Catholic Church, there was no official ban on marriage for members of the clergy. Many of the early popes had wives and children. By the eleventh century, changes to canon law forbade clerics to marry, protecting papal lands from inheritance laws. That doesn’t mean that they stopped having sex. Despite this official stand on sexual relations in the church, several popes in the Middle Ages and the Renaissance had at least one illegitimate child. Others, however, enjoyed the pleasures of the flesh, probably more than they should have. These examples of the randiest popes in history may not make you blush, but they might surprise you.

17. Pope Pius VII Swept the Future Leo XII’s Affair with His Friend’s Wife Under the Rug

Annibale della Genga, the future Leo XII, was an ordained priest when he served abroad as the papal ambassador to Switzerland. By the 1790s, della Genga moved up in the Church hierarchy; Pope Pius VI appointed him as the Archbishop of Tyre and the papal nuncio at Cologne. In this diplomatic post, della Genga spent over ten years in Germany, where he participated in peace missions during the French Revolutionary Wars. Stationed at several courts throughout Europe, including Vienna and Munich, he met with several heads of state as a representative of the Catholic Church. One of these meetings included a personal audience with Napoleon Bonaparte himself.

During his service abroad, contemporaries called della Genga’s reputation into question. In his youth, he was incredibly handsome, and he enjoyed the attention of women. Reportedly fathering three illegitimate children, he also had an affair with the wife of a Swiss Guard. When the rumors reached Pope Pius VII, he summoned della Genga to Rome to answer the charges. While he denied all of the accusations, he did reveal that he was good friends with the Guard. If he was guilty, della Genga never admitted it. The Church officially dropped the matter, never to be mentioned again.