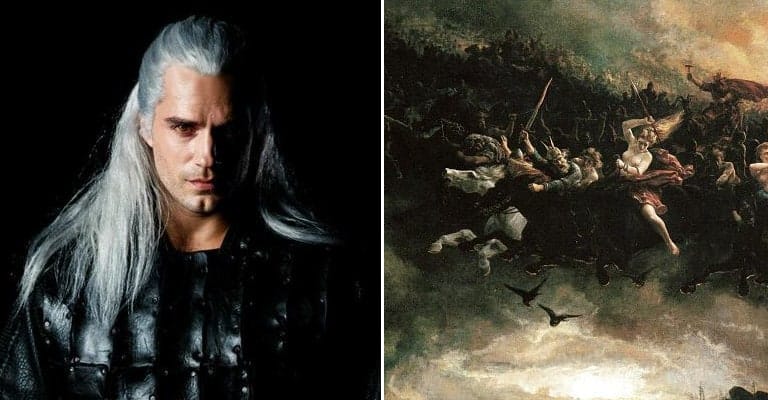 4. The Plague Maiden, one of the most iconic monsters of The Witcher, is closely inspired by the Scandinavian “Pesta” who served as the physical embodiment of the bubonic plague in traditional folklore

Responsible for one of the more nauseating moments of The Witcher 3, plague maidens are reminiscent of the aforementioned noonwraiths. Taking the appearance of a woman, coated with scabs and rotting flesh, commonly accompanied by rats, the creature delights in causing suffering and pain to nearby mortals. Spreading disease and pestilence in her wake, the plague maiden is closely inspired by the Scandinavian mythological creature known as a “Pesta”. Becoming the physical embodiment of the Black Death, which ravaged Europe between 1347 and 1351, approximately one-third of Denmark and half of Norway died in just this brief period.

Envisioned as an elderly woman wearing black robes, legends involving the Pesta affirmed that the spirit would journey from homestead to homestead carrying the plague. If she was carrying a rake, then only a handful of people would die, whereas a broom would signify mass fatalities. An attempt to rationalize the sudden calamity without the modern understanding of virology and epidemics, tales of the Pesta were surprisingly scientifically aware, including having the ghostly presence often travel by boat: one of the most common means of transmission of the bubonic plague.

3. Drawing from both Slavic and Native American mythological culture, the “leshen” of The Witcher is inspired by both the Leshy as well as the Algonquian Wendigo

Among the most visually distinct monsters of The Witcher, the leshen is an ancient creature that dwells in dense woodlands. Hunting its prey cautiously, the leshen is capable of manipulating the proximate plant and animal life to assist it. Drawn from Slavic folklore, the fictional recreation is a reinterpretation of the traditional “Leshy”. Meaning “he from the forest”, the Leshy is a spirit who rules over the forest in which he dwells and commands the creatures within. Capable of assuming multiple likenesses, although often, as in The Witcher, bearing horns and surrounded by packs of wolves, unlike his fictional counterpart he is far more neutral in personality.

Although retaining a proclivity for abduction, the Leshy is also known to help those who are polite and respectful of his domain. Consequently, comparisons have instead been drawn also between the fictional leshens and the wendigos of Algonquian folklore. Similarly capable of appearing in a variety of forms, but once again preferring that of a humanoid with the antlers of a deer, these murderous creatures supposedly roamed forests seeking to devour humans. Strongly related to environmentalist concerns among Native American culture, it was commonly thought the arrival of a wendigo symbolized a critical imbalance with nature.

2. Gradually becoming the popular monsters known today as vampires, the Striga of The Witcher were inspired by the Slavic mythology of both the Strzyga and Strigoi

A woman transformed by a curse in a monster in The Witcher, a striga is a hateful creature that seeks to kill and devour any humans it encounters. Only hunting during a full moon, the monster is possessed of great strength and can only be cured by being prevented from returning to its lair by the third crow of the rooster. Noticeably influenced by the Polish “strzyga”, a vampiric creature found in Slavic folklore, a strzyga is created when a person is born with two hearts and, consequently, two souls. Upon natural death, the second soul would resurrect the individual who would subsequently be transformed into a monster.

Preying upon humans and sucking their blood, it was believed that the decapitation of the corpse, staking of the deceased, as well as reburial, could cure the curse. Equally, both the striga and the strzyga retain similarities to the more famous “strigoi”. A troubled spirit risen from the grave, with the power to transform into an animal, become invisible, and gain strength from the blood of its victims, the strigoi originates from 16th century Croatia. Inspiring the modern-day vampire, the folklore was quickly adopted by nearby Transylvania and was immortalized in 1897 by Bram Stoker’s Dracula.

1. Inspired by the Slavic mythological character Baba Yaga – “one of the most memorable and distinctive figures in Eastern European folklore” – the Crones of Crookback Bog are a trio of evil and malicious witches

Known also as the Ladies of the Wood, the Crones are a trio of witches who reside in the swamps of Velen. Making their home in Crookback Bog, the powerful sisters dominate their surroundings, communicating with the outside world predominantly via an enchanted tapestry. Offering both benevolent services as well as inflicting punishment, the Crones successfully compel the nearby villages into cult-like worship of themselves. Adopted from Slavic folklore, the Crones are unquestionably inspired by the prominent supernatural figure of “Baba Yaga“. Represented as either an individual or as one of a trio of sisters all bearing the same name, Baba Yaga is a deformed maternal character commonly depicted as an old woman with the legs of a chicken.

Residing deep within a forest, Baba Yaga is one of the most recurrent figures in Slavic fairy tales. Ambiguous in morality and nature, appearing as both a savior and as a villain, Baba Yaga may elect to either help or hinder those who approach her. First recorded in 1755, various cultural interpretations of Baba Yaga have induced a highly enigmatic and emblematic figure, with modern commentators remaining disputed whether or not she was meant as a didactic lesson concerning the human condition or merely a stock character designed to frighten disobedient children.

“Once Upon A Time: On the Nature of Fairy Tales”, Max Luthi, Frederick Ungar Publishing Company (1970)

“Phantom Armies of the Night: The Wild Hunt and the Ghost Processions of the Undead”, Claude Lecouteux, Inner Traditions Publishing (2011)

“Meeting the Other in Norse Myth and Legend”, John McKinnell, D.S. Brewer Publishing (2005)

“The Witcher: Everything We Know About the Crones of Crookback Bog“, By Jennifer Melzer, CBR, Published Jan 20, 2021

“The Encyclopaedia of Vampires, Werewolves, and Other Monsters”, Rosemary Ellen Guiley, Checkmark Books (2004)