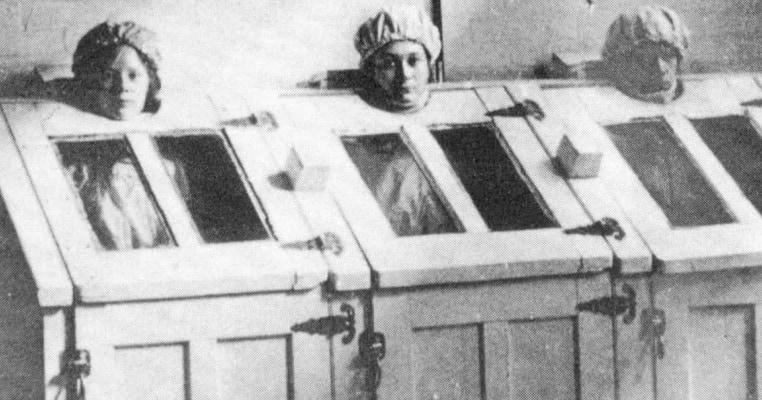 16 Terrifying Facts About Mental Asylums in the Early 20th Century

3. To Be Released, Patients Had To Fake Wellness

There was no process or appeal system to fight being involuntarily committed to an asylum. The doctors and staff would assume that you were mentally ill and proceed under that belief, unflinchingly and unquestioningly. Any attempt to persuade them of one’s sanity would just be viewed as symptoms of the prevailing mental illness and ignored. Patients quickly discovered that the only way to ever leave an asylum, and sadly relatively few ever did, was to parrot back whatever the doctors wanted to hear to prove sanity.

In episodes perhaps eerily reminiscent of Captain Picard’s “four lights” patients would have to ignore their feelings and health and learn to attest to whatever the doctors deemed “sane” and desirable behavior and statements. Doctors at the time had very rigid (and often deeply gendered) ideas about what acceptable behaviors and thoughts were like, and patients would have to force themselves into that mold to have any chance of being allowed out. Even those who were truly well, like Nellie Bly, were terrified of not being allowed out after their commitment. She and her editor discussed various emergency plans on how to rescue her from the asylum should they not see fit to let her go after her experiment was complete.

Unsurprisingly, given the torturous and utterly ineffective treatments practiced at the time, the lucky few patients allowed to leave an asylum were no healthier than when they entered. No actual care was given to a specific patient’s needs or issues; they were instead just forced to perform the role of a healthy person to escape the hell on earth that existed within the asylum walls. For those who were truly mentally ill before they entered, this was a recipe for disaster. Many depressed and otherwise ill patients ended up committing suicide after escaping the asylums. Doubtless, the horrors they witnessed and endured inside the asylums only made their conditions worse.

Thanks to actual psychiatric science, we now know that the time immediately after discharge from an inpatient facility is the most dangerous time for many patients. Suicide risk is unusually high when patients are out of a controlled setting and reintegrate into the outside world abruptly. One study found that women were 246 times more likely to die within the first week of discharge from a psychiatric institution, with men being 102 times more likely. Given the ignorance of this fact in 1900 and the deplorable treatment they received, one wonders how many poor souls took their lives after leaving asylums.

1. Many Children Died in Asylums

Perhaps one of the greatest horrors of the “golden age” of the massive public asylums is the countless children who died within their walls. Many children were committed to asylums of the era, very few of whom were mentally ill. Children with epilepsy, developmental disabilities, and other disabilities were often committed to getting them of their families’ hair. These children were treated exactly like adults, including with the same torturous methods such as branding. Due to either security or stigmas of the era, children involuntarily committed were rarely visited by family members and thus had no outside oversight of their treatment.

It is perhaps unsurprising, given these bleak factors, that children had an unusually high rate of death in large state-run asylums. Some of this may be attributable to natural deaths from untreated or under-treated epilepsy. However, one wonders how many more were due to abuse, suicide, malarial infection, and the countless other hazards visited upon them by their time in asylums. The obsession with eugenics in the early 20th century added another horrifying element, with intellectually disabled and “racially impure” children also being institutionalized to help society cleanse itself of the undesirable.

Timeline – What Exactly Did Mental Asylum Tourists Want to See?

Medium – What it Meant to be a Mental Patient in the 19th Century?