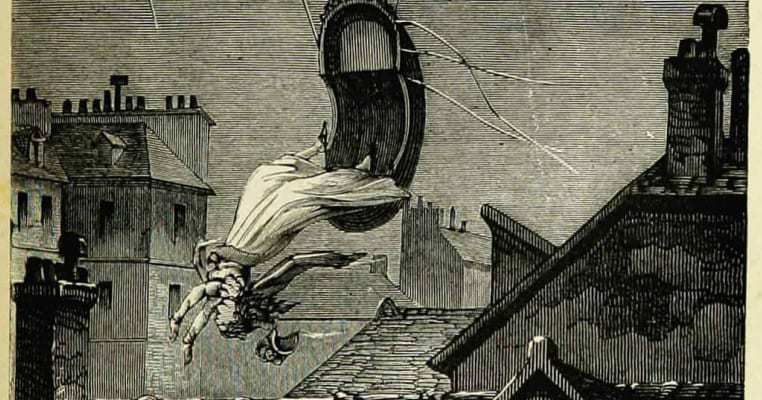 Martin (1356-1410) was King of Aragon, Valencia, Sardinia, Corsica and, very briefly, Sicily. Though nicknamed Martin the Humane, this says more about the standards of behavior for medieval kings than Martin’s personality, for he was an enthusiastic warrior who fought many battles in his lifetime. To control such a vast number of territories and maintain several crowns, Martin did not scruple to put down any pocket of resistance to his rule, and was really rather good at it. Yet he did not just defend his lands and titles, but looked for trouble, launching Crusades in North Africa against the Moors.

Medieval kings are renowned for their incredible appetites, hosting enormous banquets with menus that truly make one’s jaw drop and were often praised for how much they could shove down their necks in one sitting. Martin was no different in this regard. One day, at the age of 54, Martin had been enjoying a feast near Barcelona that saw him consume an entire goose on his own, probably with all the trimmings to boot. Surprisingly, he felt a bit unwell afterwards, and had to retire to his bedchamber for a bit of a lie-down to cure his indigestion.

Martin was determined not to let indigestion ruin his night, however, and invited his jester to his chamber to amuse him. Martin asked the jester where he had been, to which the latter replied: ‘in the next vineyard, where I saw a young deer hanging by his tail from a tree, as if someone had so punished him for stealing figs’. The joke was so hilarious that Martin laughed non-stop for three whole hours, then fell to the floor, stone dead. Historians debate the story, however, and suggest he may have died of plague or poisoning. Yah, boo, hiss.

‘Cry “God for Harry, England, and Saint George!”‘ booms the titular character of Shakespeare’s Henry V. Shakespeare’s history play is a chest-thumping, patriotic romp that tells the story of King Henry V of England’s triumph over the French at the Battle of Agincourt in 1415, and the king continues to appeal to patriotic Englishmen today. Henry V was the son of Henry IV, a noble who removed his nephew, Richard II, from the throne of England. The former’s military talent was key to his father keeping his disputed throne, ably putting down the Glyndŵr and Percy uprisings and winning plaudits.

Henry’s 1413 coronation was accompanied by a heavy snowstorm, and opinion was split on how to interpret this omen. Fortunately, it turned out to be a positive one, for Henry’s diplomacy brought peace to England. Most famously, Henry’s campaigns against France during the Hundred Years’ War saw him marry the daughter of the King of France and named heir to his throne, seemingly ending the bloody conflict in England’s favour, in 1420. The aforementioned Battle of Agincourt was a real highlight, and the date is never forgotten by English schoolchildren. Unfortunately, Henry died in 1422, and the conflict resumed.

Perhaps the only thing Henry had in common with King John was how he died. Not everyone in France was happy for an Englishman (and one who had killed so many Frenchmen, to boot) to be crowned king, and in 1422 Henry had to put down an uprising in northern France. He contracted dysentery at the Siege of Meaux, and died a few months later in great pain and, probably, embarrassment. In a final irony, the French King, Charles VI, died only a few months later, which would have made Henry King of France and England. Bad luck, mate.

James II (1430-60) became King of Scotland at the age of just 6. He benefitted from the misfortune of his close family, in this regard, as his twin-brother, Alexander, died at the age of only 1, and his father was assassinated. Scotland was run by James’s cousin, Archibald Douglas, 5th Earl of Douglas, before James came of age to rule himself, but when Douglas died in 1439, power was precariously shared amongst other nobles. This unsuitable group treacherously assassinated the 6th Earl of Douglas and his younger brother in 1440, having invited them to dinner in the king’s name.

On this occasion, James had pled for the 16- and 12-year-olds’ lives, and when he came of age in 1449 he helped the Douglas family to get revenge on the Livingstones, who were blamed for the plot. However, he turned on the family quite horribly in 1452, when he stabbed the 8th Earl of Douglas 26 times after suspecting him of complicity in a plot. This murder aside, James was a popular king, fraternising with commoners, supporting learning in Scotland, including founding the University of Glasgow, and improving diplomatic relations with Flanders through his marriage to Mary of Guelders.

James’s fondness for artillery was to cost him dear. In 1460, he besieged Roxburgh Castle, one of the last strongholds of English resistance following the Wars of Independence. For this, he used a large number of cannon imported from Flanders. On the 3rd August 1460, he was standing near to one cannon, known as The Lion, when the fuse was lit. According to the contemporary chronicler Robert Lindsay of Pitscottie, ‘his thigh bone was dug in two with a piece of misframed gun that brake in shooting, by which he was stricken to the ground and died hastily’.

Francis Bacon (1561-1626) was a true polymath, and one of the most learned men of his day. He matriculated at Trinity College, Cambridge, at the age of 12, and also attended the University of Poitiers. At Cambridge, he came to the attention of Queen Elizabeth I of England, who called him ‘the young Lord Keeper’. After several years traveling the continent and expanding his learning, Bacon was admitted as a barrister in 1582 and became an MP. He was an outspoken and liberal politician, and his opposition to high taxation and feudal rights brought him into conflict with the Queen.

He prospered under Elizabeth’s successor, James I, and his unwavering support for the monarch’s oft-eccentric policies was rewarded with a knighthood in 1603. He later became Lord Chancellor, but his great debts saw him removed from the post and suffer public disgrace. However, it was in the field of science that Bacon truly excelled. He is credited as the founder of empiricism – the principle that knowledge only comes from sensory experience – which radically transformed scientific methodology and changed science into the rational discipline that it is today. He also published influential and much-quoted tracts on philosophy, law, and religion.

Bacon died conducting an experiment, but it was still an inglorious way for such a learned man to go. Traveling to Highgate, North London, in the snow, Bacon was suddenly inspired to test the potential of snow for meat preservation. Stopping his carriage and buying a fowl from a nearby house, Bacon stuffed it with snow. Unfortunately, according to his near-contemporary, John Aubrey, ‘The Snow so chilled him that he immediately fell so extremely ill, that he could not return to his Lodging’. He never left Arundel Mansion, where he was carried, and died of pneumonia on April 9, 1626.

Sophie Blanchard (1778-1819) had one great, dominant passion: aeronautics. She was the wife of the ballooning pioneer, Jean-Pierre Blanchard, but was not content merely to observe her husband’s interests. Madame Blanchard was of a nervous disposition, and easily startled, but she found that she was, paradoxically, free of anxiety when airborne. Her first ascent with Blanchard took place at Marseilles in 1804, and she became the first woman to work as a professional balloonist. Sadly, Jean-Pierre, the first professional balloonist of all, fell from his balloon after suffering a heart attack in 1809. Madame Blanchard however refused to be discouraged.

In all, she completed over 60 ascents. Her great fame and popularity transcended even the change of rule in France following the French Revolution: Napoleon Bonaparte named her ‘Aeronaut of the Official Festivals’, and Louis XVIII made her ‘Official Aeronaut of the Restoration’ after the monarchy was reinstated. She was also popular across Europe, and in 1810 her ascent was blamed for the poor attendance of Carl Maria von Webber’s opera, Silvana, in Frankfurt. Alongside the unusual spectacle of seeing someone go up in a balloon, Madame Blanchard also performed elaborate tricks, such as parachuting dogs from the basket.

As competition from other aeronauts increased, her routine became increasingly extravagant, and eventually incorporated firework displays. Since her balloon was filled with hydrogen, lighting fireworks was a dreadful idea, and her luck finally ran out on July 6, 1819 at the Tivoli Gardens, Paris. Shortly after she emerged from a line of trees, the balloon caught fire. The balloon plummeted towards the ground, with Madame Blanchard entangled in the netting and thus unable to escape. It crashed into a roof, flinging her to the ground, which killed her on impact. At least she died doing what she loved, however foolishly.

Clement Vallandigham (1820-71) was born in New, Lisbon, Ohio, and was home educated by his father, a Presbyterian minister. He had a strong commitment to justice, and the confidence to stand by his beliefs, as evidenced by a dispute with the president of Jefferson College which saw him honorably dismissed, without a degree. He then became a lawyer at his own practice in Dayton, Ohio, and almost immediately entered politics as a Democrat. His beliefs, however strong, were not always right: he was fervently anti-abolitionist, and voted against the repeal of laws restricting the civil rights of African-Americans.

After becoming a Congressman in 1858, Vallandigham was one of the government officials who interrogated the radical abolitionist, John Brown, after Harper’s Ferry. Vallandigham was also an outspoken supporter of state rights, and became one of the loudest dissenting voices in the Democrat party against Abraham Lincoln during the American Civil War. His rampant anti-war stance led to his many critics accusing him of wanting The Confederacy to win the war and his being voted out of Congress by a huge margin in 1862. Lincoln finally tired of Vallandigham’s rabble-rousing, and sent him to The Confederacy as a POW.

After the Civil War ended, Vallandigham returned to law full time, whilst maintaining his stance against African-American suffrage and equality. In 1871, Vallandigham was representing a client accused of fatally shooting someone in a barroom brawl. Taking the line that the deceased had accidentally shot himself, Vallandigham decided to give a practical demonstration of how this was possible. Unfortunately, Vallandigham did not realize that the gun was loaded, and shot himself in the abdomen, which killed him. Though the demonstration was far more practical than even Vallandigham had anticipated, it did succeed in getting his client acquitted of murder.

Blackson, Thomas A. Ancient Greek Philosophy: From the Presocratics to the Hellenistic Philosophers. Oxford: Wiley-Blackwell, 2011.

Prebble, John. The Lion in the North. Harmondsworth: Penguin, 1973.